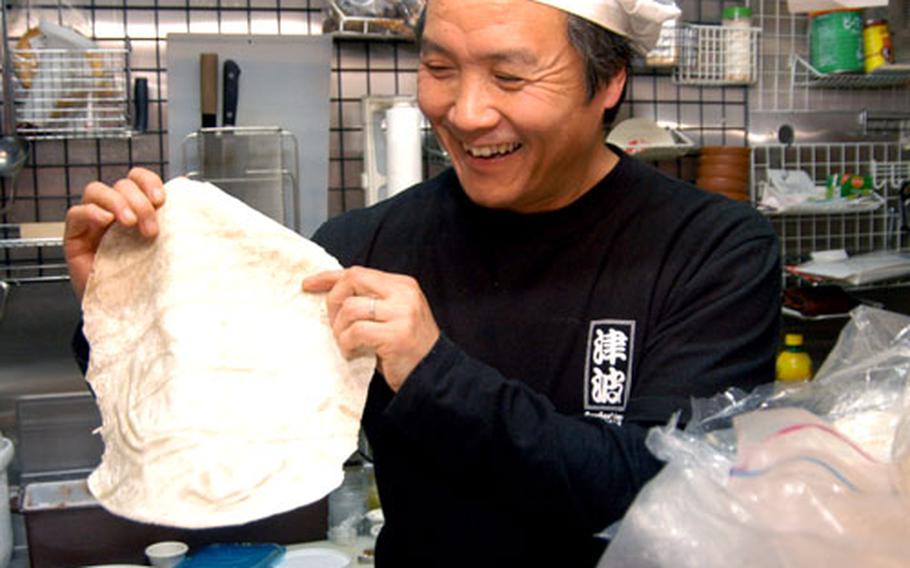 Shigeru “Shige” Lida is passionate about Mexican food and surfing, and he celebrated both in 2003 by opening the bar and restaurant complex that contains La Costa Restaurant, Tsunami Bar and his surf shop. (Allison Batdorff / S&S)

YOKOSUKA NAVAL BASE, Japan &#8212; I was drawn to the blue glow of the Tsunami Bar like an insect zombie &#8212; my fate sealed, a bug unable to break away from the zapper&#8217;s deadly magnetism.

Course, I didn&#8217;t put up much of a fight. There were surf videos on and the bartender was smiling at me. Instead of people bellowing over ear-splintering music, conversation was a mellow hum. A Jack Johnson song was playing. And the food smelled incredible.

In the racket of the Honch nightlife district outside Yokosuka Naval Base, Tsunami Bar and the La Costa restaurant are an oasis of chill.

You&#8217;ll find the owner &#8212; just call him Shige &#8212; tossing tortillas up front. At 52, he is passionate about Mexican food and catching waves. Now, a three-floor complex pays homage to both. La Costa is on first floor, Tsunami Bar is on the second and Shige&#8217;s surf shop is on the third.

So is capturing the &#8220;true taste&#8221; of Mexico for discriminating American palates, he said. Americans know what Mexican food should taste like, so he decided to learn from the masters.

Now the bar is peopled with the Corona- and Sol-swilling surf set noshing burritos and chatting over carne asada.

The place definitely has international flavor, says Sayaka Moroda, who is pursuing an international relations degree at a Yokohama university when she&#8217;s not working at the bar.

There are more than 30 items on the menu, including taco rice, mole, tortilla soup, flan and nine kinds of hot dogs. The most expensive item on the menu is 2,000 yen. Happy hour lasts until 9 p.m. with 400-yen Corona and Sol.

Clientele: Breaks down to about 70 percent Americans, 30 percent Japanese