Bar Sleuth: The food can’t be beat at The Kushi Bar 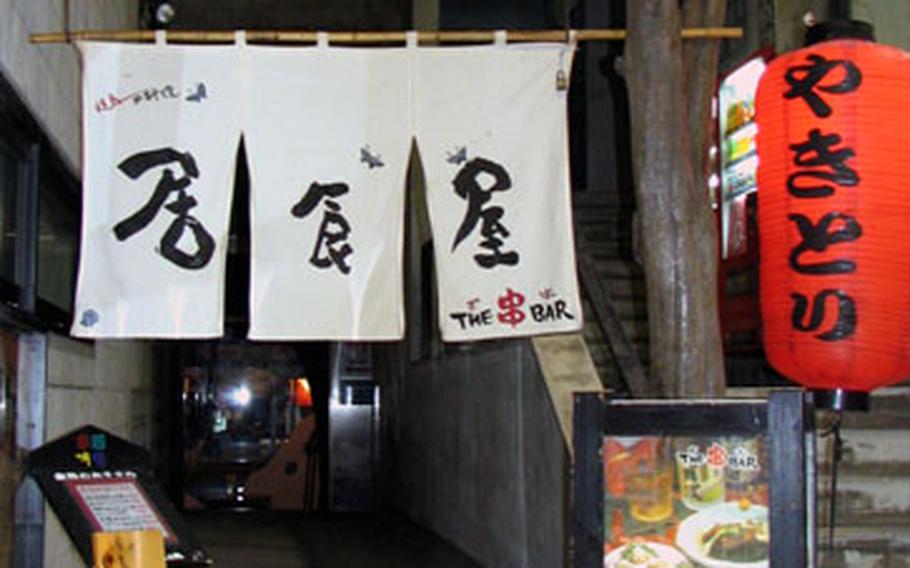 The red lantern outside identifies The Kushi Bar as one of Okinawa’s thousands of small izakayas, or “snack bars.” They’re great places for a quick snack and ice cold beer or glass of awamori. (David Allen / S&S)

NAHA, Okinawa &#8212; The name of this place is The Kushi Bar, but seeing it written in English here doesn&#8217;t do the name justice.

The name on the sign is written in English and Japanese, so the name looks more like &#8220;The 8 Bar.&#8221; Only you have to draw a vertical line through the 8 in order to create the kanji character for kushi, which means skewer or stick.

There are thousands of such izakayas throughout Japan. Most are small, hole-in-the-wall taverns with maybe three or four tables, a bar and a friendly mama-san ready with a smile and a light snack to go along with whatever drink you&#8217;re having.

Most of these places are also called akachochin, or &#8220;red lantern&#8221; bars, marked by large red lanterns hanging outside the entrance. Some offer just whatever food the cook has whipped up in the tiny kitchen. Others are a bit larger and provide a wide variety of local Okinawan and Japanese dishes that cost anywhere from 200 yen (about $1.70) to 550 yen ($4.70) or so.

The night I wandered into The Kushi Bar with my son, Matthew, and his Okinawan girlfriend, Ayano, I ordered a mug of ice-cold draft Orion, the local beer. It&#8217;s just right for Okinawa&#8217;s subtropical climate.

Like most snack bars on busy streets, this one was packed and smoky. But the food can&#8217;t be beat. We ordered several different plates and shared. I had a spicy mushroom, beef, onion and potato concoction that Ayano got a big kick out of me trying to pronounce in Japanese.

We also had beef and chicken yakitori, a pork and seaweed combo called kubu idichi, and a salad with Okinawa&#8217;s infamous bitter goya, a knobby green gourd-like vegetable that we had mixed with pork and eggs in a dish called champaru.

No dish cost more than 500 yen ($4.30), which seemed cheap to me but brought a complaint from Ayano, who said the prices were a little higher in this izakaya because the shopping district attracted Japanese tourists from the mainland.

It was a good, cheap night out. I&#8217;m thinking of being a &#8220;Red Lantern Ranger.&#8221; There are thousands of these little places on Okinawa to explore and visiting them will help me improve my lousy Japanese while spoiling my taste buds.

Not a bad way to spend an Okinawan night.

Drink prices: It costs 630 yen for a mug of Orion Draft, a bit pricier than in other places. Most izakayas, ones located away from the tourist areas anyway, are cheaper. A bottle of 30-proof awamori can be had for 2,000 yen to 3,000 yen and shared by the whole gang.

Location: On Kokusai Dori, a popular shopping district in the heart of Naha, Okinawa&#8217;s capital