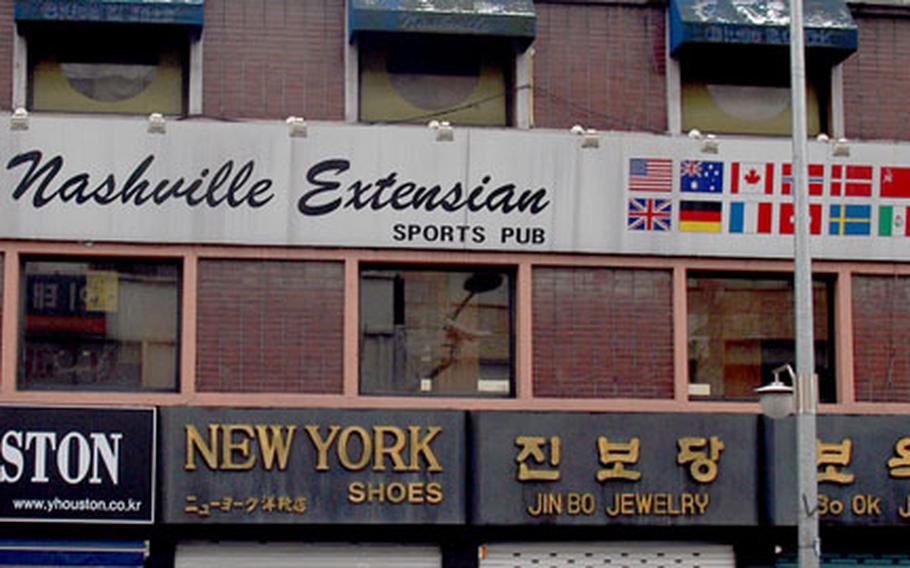 Club Caliente shows little life early in the morning, but late at night, and especially on the weekends, Caliente draws a salsa-loving clientele. (Teri Weaver / S&S)

SEOUL &#8212; Even in my first few days in South Korea, people were inviting me to Club Caliente.

So I was thrilled when, on a weeknight three days before Christmas, I was finally following the red &#8220;salsa&#8221; arrows up the stairs past the Nashville Extension and into sultry, sweaty syncopation.

My friend Brenda and I stopped at the door and peered in. There was one man at the bar, eating dinner and talking with the bartender. Not exactly the pulsating party I was hoping for.

Salsa dancing, as I&#8217;ve come to learn, is movement that begins on the second beat of the music and often means dancing to the music&#8217;s rhythm rather than its melody. The man leads, giving his partner clues in the form of little pats or tugs to signal directions on the dance floor.

Brenda and I took a clue from the empty dance floor and retreated to another bar.

What had we done wrong? Was it too close to the holidays? Was it too early? Were weekend nights better?

Brenda was shocked, especially because she had her own empirical evidence that Caliente could make Seoul&#8217;s snowy streets disappear.

At our next stop, we found more people, including Jose, who is from Puerto Rico.

I crept back up the stairs on a recent weekend, a little surprised to find a 5,000-won cover charge (about $5, and a drink is included) but much relieved to see so many people dancing. I sat on the sidelines for a while, then began to make my moves. I&#8217;m certainly no expert, but I&#8217;m willing to learn.

Rating: Four beers out of a six-pack.

Entertainment: Your own two hips.

Clientele: A mix of servicemembers, Koreans and foreigners living in Seoul.

Dress: Whatever makes you sway.

Location: On the main drag in Itaewon, above the Nashville Extension.