Bar Sleuth: One man, one mission and a world full of beer 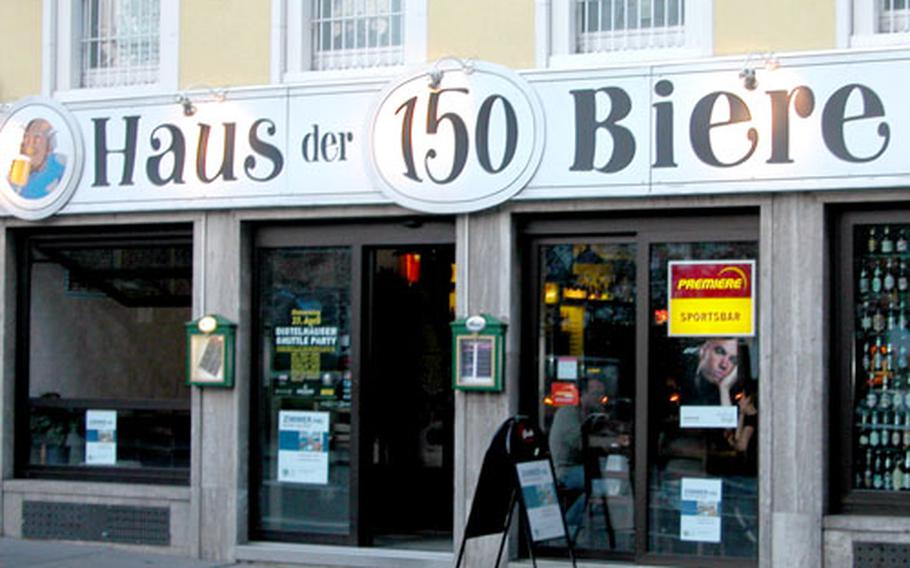 Go around the world in 150 beers at Würzburg, Germany’s Haus der 150 Biere. The casual bar stocks international brews, served up in a friendly atmosphere full of Germans and Americans. (Geoff Ziezulewicz / S&S)

W&#252;RZBURG, Germany &#8212; Believe it or not, gentle readers, we reporters take our jobs very seriously, and sacrifice our time and bodies to bring you compelling and relevant stories.

With this in mind, and with my car parked for the night, I took on the solemn duty of attempting to drink every brew sold at Haus der 150 Biere, or The House of 150 Beers, here in W&#252;rzburg.

It was a monumental task, but my readers come first.

The bar has been open for about a decade, and caters to a mixed German and American clientele, said Nicola Demmich, a cute bartender who guided me through the Haus&#8217;s massive beer reserves.

Surprisingly, the Haus does not employ an elaborate transnational ordering process to keep its numerous fridges stocked with beers from Poland to Palestine.

With the confidence and focus of a man about to get his proverbial drink on, I perused the beer menu and started out with a French beer called Adelscott. The selling point of this brew is that it&#8217;s made with whiskey malt. It basically tasted like a beer with a whiskey shot dropped in, not really my style, but good nonetheless.

I next moved on to a Carib Lager from Trinidad. This was lighter than the lightest American swill that can be bought for change in the States. Having said that, it went down smooth.

Next up was an Aecht Schlenferla Rauchbier, which is basically a smoked beer. It was flat and tasted like beef jerky, but not in a good way.

The bar also stocks a couple of American beers, though I had never heard of Real American Lager or The Raven Lager. Must be a regional thing.

After only a handful of beers, and the clock not yet even near 8 p.m., I bowed out of the fight. The more than 100 other beers sold at the Haus would have to wait for another night.

There are a couple of offerings that customers should check out that I didn&#8217;t get to. One, a Berliner Weisse, involves pouring a pool of strawberry syrup at the bottom of the glass before the beer goes in.

There&#8217;s a hemp beer that features a scratch and sniff label. Demmich said she often gets inquiries from soldiers concerned that the beer will cause them to fail a drug test. Rest easy, fellas. Demmich promised that it won&#8217;t.

After traveling around the world on a bed of malted hops at the Haus, it&#8217;s comforting to know that, no matter where we come from, our beer all largely tastes the same.

Drink prices: Firm but fair prices for beers from across the world. German brews start at a couple euros, most international beers are about 3 to 4 euros.