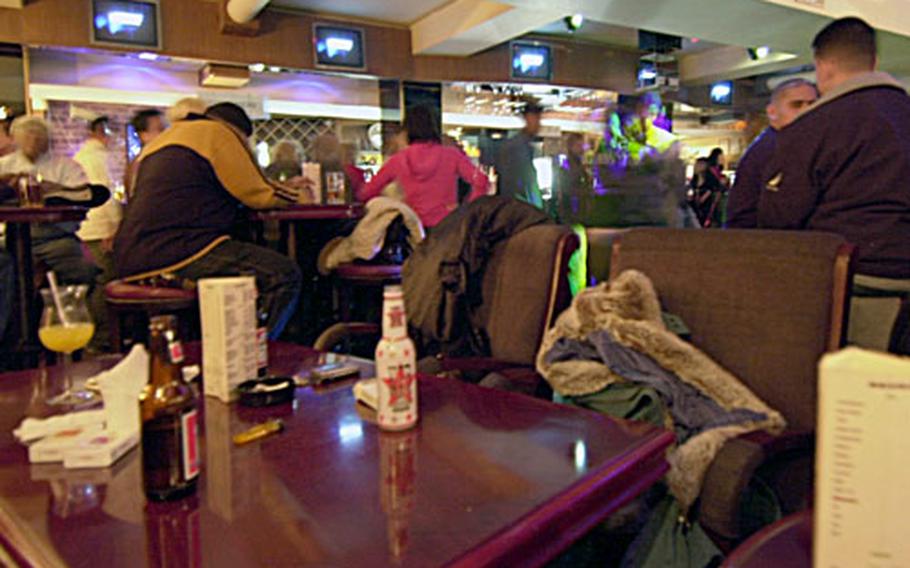 Helios Pub and Grill starts slow every Thursday during Ladies Night, but by 10 p.m., the place is packed. (T.D. Flack / S&S)

It goes like this: 17 women divided by four men equals 10 years too late.

Welcome to &#8220;Ladies Night&#8221; at Helios Pub and Grill, arguably the most popular dance joint/meat market in the raucous party district near the U.S. Army&#8217;s Yongsan Garrison.

Searching for another bar to profile for this column, I left the warm comfort of a home with a wife and two kids to find the right place for you younger single folks to party. And find it I did, albeit 10 years too late for a married guy in his mid-30s.

But reality quickly set in and the ratio seemed to drop every 30 minutes. When the rap/dance music started blaring around 10 p.m., the dance floor was packed with guys and girls. But, per Korean custom, most of the girls were dancing with girls.

Helios offers more than the normal Itaewon bar does as far as food and drink. If you&#8217;re just back from that yearlong Iraq deployment and the money is burning a hole in your pocket, you can always spring for the $1,100 bottle of 30-year-old Ballantine Scotch whisky. And a bottle of Bacardi 151 will run you about $140.

But if you&#8217;re limping along until next payday, the draft beer is $3. And the women&#8217;s free-drink menu includes screwdrivers, draft beer, rum and Coke, vodka pineapple, gin and tonic, vodka and tonic and Tom Collins.

If you&#8217;re hungry, you can find everything from nachos, chicken wings and spicy chili shrimp appetizers to steamed mussels, panfried scallops with watercress and steak dinners. The food is on the pricier side &#8212; my spicy shrimp appetizer was about $18 &#8212; but the portions were generous and it was actually pretty good.

If you&#8217;ve tried Helios on the weekend and were turned off because of the crowds, give Ladies Night a shot.

Rating: Six beers out of a six pack!

Food: Tasty and plenty to chose from. The menu offers greasy bar snacks like french fries and chicken wings. But the meals &#8212; ranging from pasta to pizza to steak &#8212; are worth the price.

Location: Located on the main strip that runs through Itaewon. If you&#8217;re walking from Yongsan Garrison, it&#8217;s on the left side of the street, about one block past the Hamilton Hotel. Look up &#8212; it&#8217;s on the second floor.