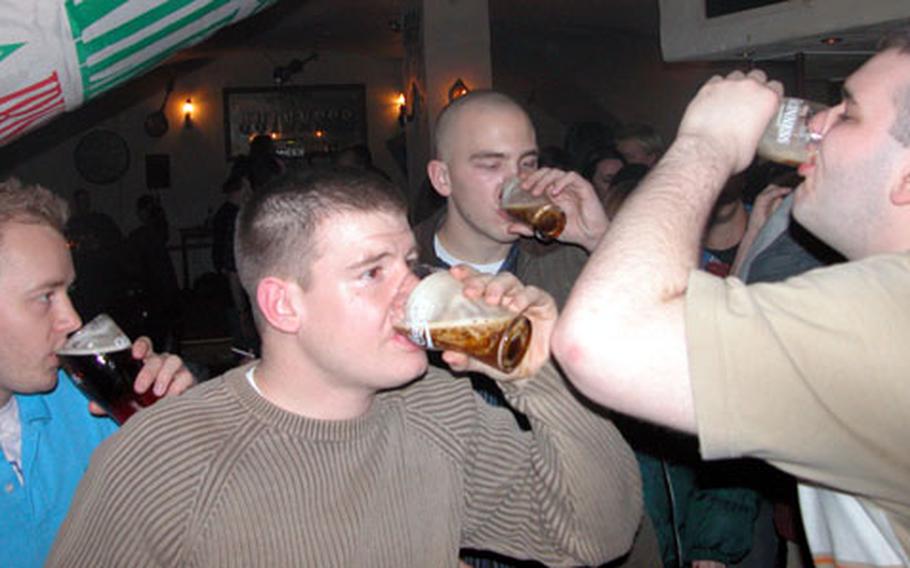 Shots of all varieties, including Irish car bombs, are enjoyed by GIs and Germans alike at Jimmy&#39;z Irish Pub in Würzburg, Germany. The drinking is hard and the atmosphere is jovial. (Geoff Ziezulewicz / S&S)

So about two years ago, Wagner bought and opened Jimmy&#8217;z Irish Pub, a cavernous bar that is the perfect place to get lost for a night. The rounded ceilings of the subterranean pub and its winding nature hold a surprising number of people without a crowded-bar feeling.

Situated in downtown W&#252;rzburg, Jimmy&#8217;z hosts a variety of nationalities, from Germans and Brits to Americans. Wagner said he makes a special effort to get Americans in and to give them a good place to hang out.

Wagner got hellos from several patrons in between helping bus tables and cooking up standard bar food, including some quality pizza. At one point, a cute brunette walked up and gave him a big hug.

While serving up pints of Guinness and a local beer called W&#252;rzburg Hofbrau, Wagner and his bar staff also concoct all types of drink specials.

For instance, there&#8217;s a wicked blend called a frostbite cocktail. Electric blue and chock-full of tequila, Wagner said it was the perfect antidote to a cold winter night.

Some nights, a DJ plays music ranging from Tenacious D and Sublime to The Steve Miller Band. And on other nights, Jimmy&#8217;z hosts live bands.

On the first Tuesday of each month, the pub puts on an Irish folk music session.

Wagner said he works to provide a safe place for American soldiers to drink and let loose.

As girls danced near the stage and shots kept getting poured, Wagner said a good time is what he wanted when he opened Jimmy&#8217;z a few years ago.

And that translates well in any language.

Drinks: A full bar featuring pints of Guinness and local brews. The owner and his staff also concoct drink specials every week or so.

Ambiance: Cavernous. Live music and DJs each night, with a mix of nationalities.