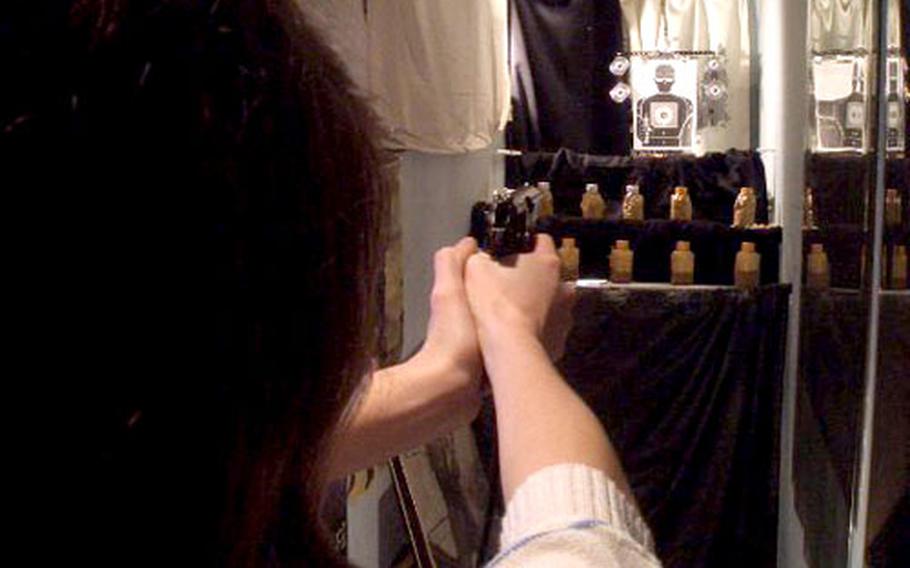 In the back of the simple compact bar in a Roppongi basement, shooters can select targets, cans or small discs to blast away in a small enclosed shooting alley at Hollow Point. (Juliana Gittler / S&S)

That&#8217;s right. A childhood passion for toy models gave Yoshihisa Takahashi the idea for a new Roppongi bar about six years ago. To stand out from the legions of other bars in the area, he thought man&#8217;s fascination with guns, and especially the kinds that go &#8220;pop,&#8221; would be a nice niche.

He was right. Hollow Point attracts all kinds of people. Men, who make up most of the patrons, come for the toys, Takahashi thinks. It&#8217;s the women who show up to blow off steam.

It&#8217;s probably worth noting that laws in Japan mean there aren&#8217;t actually metal slugs in the chambers. You shoot air guns with small plastic pellets. It still offers some of the realism &#8212; the adrenaline, the quick pops, the bragging rights after tearing the heart and guts from the paper target, which you get to keep.

The bar itself is pretty cool. There&#8217;s a large screen on the wall that alternates between movies with lots of guns and rock videos from the days when MTV played videos.

In the back of the bar, an enclosed shooting range about 15 feet long gives the trigger-happy the choice of a human-shaped target, cans or small discs to shoot at.

The most popular gun is the heavy Desert Eagle, which has the strongest recoil and was fashionably hoisted by Trinity in the movie &#8220;The Matrix,&#8221; Takahashi said.

In the six years the place has been shootout heaven, no one&#8217;s been injured, Takahashi said. Because the guns use air to function, they are tethered by their air tubes, so a customer can&#8217;t take off shooting across the room.

In the Roppongi area of Tokyo, Japan