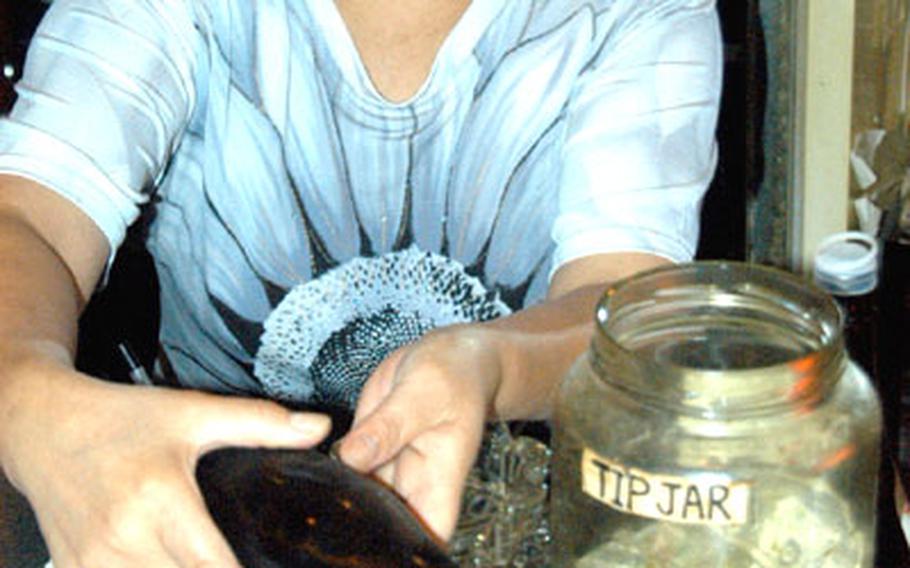 Yumi Yasumoto pours a cold bottle of Kirin recently at Yumi’s Bar in Fussa, Japan. All drinks are 600 yen at the tiny pub, which sits a block east of “Bar Row” on a narrow backstreet. (Vince Little / S&S)

Yumi&#8217;s was the first place in the bar district outside the main gate at Yokota Air Base to open its doors to my wife and me during our first venture into the area more than three years ago. At least three other establishments wouldn&#8217;t.

Owners Katsutoshi and Yumi Yasumoto have been serving drinks and cooking up various favorites for U.S. troops since 1967.

It was a popular hangout for servicemembers on their way to and from the war in Vietnam. Many would sign $1 bills, perhaps thinking they might not make it back, Katsutoshi recalls. He started plastering them on the bar&#8217;s walls, and some remain today.

Plopped down at the Tetris machine in the center of the bar &#8212; with Yumi never allowing my beer glass to approach empty &#8212; I&#8217;m reminded of the days when Nintendo&#8217;s Gameboy was practically glued to my palm.

On a little stove tucked away behind the bar, Katsutoshi whips up what&#8217;s got to be the world&#8217;s best BLT sandwich. He once made 60 in a single night. It&#8217;s the perfect remedy for those late-night, alcohol-induced munchies.

Food: The world&#8217;s best BLT goes for 600 yen. Noodles, gyoza, sandwiches, salad and snacks are among the other munchies.

Entertainment: Karaoke for 200 yen a tune. Between songs, images of scantily clad women pop up on the two overhead screens. The bar has a TV with English-speaking channels, upon request. There&#8217;s a jukebox and Tetris machine.

Clientele: Catering to the GI crowd.