Bar Sleuth: At this Okinawa bar, they know it’s ‘Up To You’ 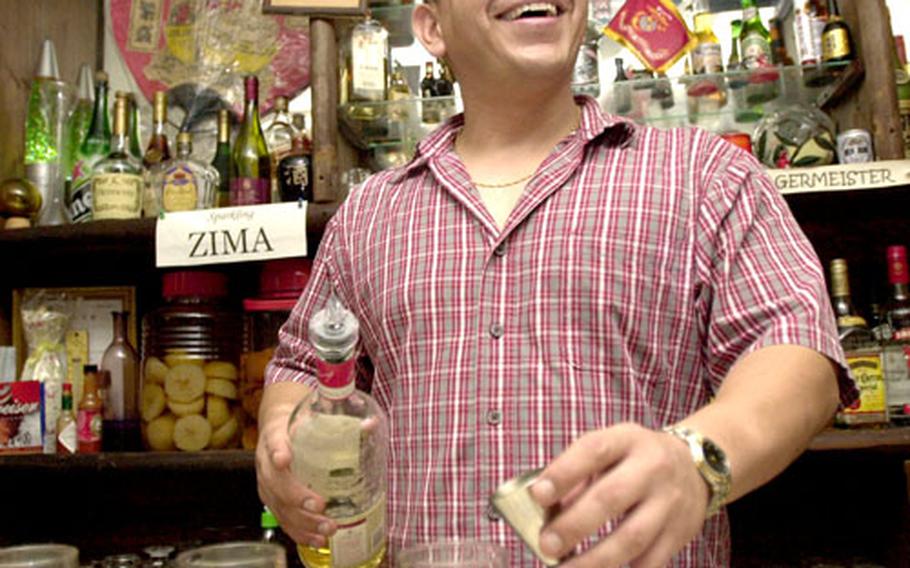 Tony laughs while pouring shots at his bar, Up To You, in Ginowan, Okinawa. The bar is on Highway 58 between camps Foster and Kinser. Tony prefers keeping his last name to himself. (Fred Zimmerman / S&S)

&#8220;Ah, my savior,&#8221; I thought as I reached for my frosty mug of cold draft beer. As I took a swig, the heat quickly turned icy, nearly to the point of a brain freeze. The game continued, the wings so good I couldn&#8217;t help have another and repeat the whole process.

Maybe that&#8217;s why this small bar in Ginowan is named Up To You.

Up To You is owned by Tony, a former Marine of 11 years who kept his last name to himself.

Along with the cold beer, Tony offers up plenty of other drinks, including homemade plum, apple and grapefruit fermentations. He mixes the 30-proof alcohol with club soda to make a sweet, spritzy drink.

Shots also flow plentifully, especially for the handful of regulars who take turns buying rounds. (Warning No. 1: Buyers have to raise a toast.)

A bar favorite is a &#8220;Flaming Vaporizer&#8221; &#8212; a mixture of Bacardi 151 rum and amaretto. The mixture is lighted, then a hand goes over the glass to snuff out the blue flame and the drink is swirled around.

The lucky drinker &#8212; or unlucky depending on how one handles one&#8217;s liquor &#8212; then takes the glass with his hand over the top. To drink, you slightly break the seal and quickly down the shot and cover the glass back up. You then inhale the fumes.

Up To You, Ginowan, Okinawa

Location: On Highway 58 about halfway between camps Foster and Kinser. In the same complex as Sam&#8217;s Anchor Inn restaurant.

Food: Everything from awesome chicken wings to quesadillas.