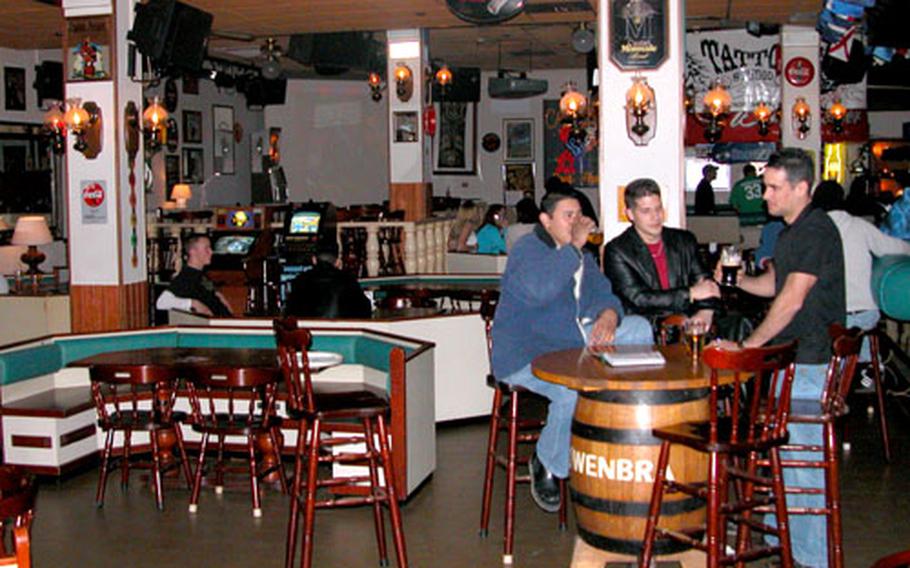 AVIANO, Italy &#8212; For many Americans, this small town is the epitome of northern Italian charm. The streets are narrow, the pace is slow and the restaurants are personable and delicious.

But try being an airman here. Better yet, try being a young airman and getting a beer here. A drinker&#8217;s town Aviano ain&#8217;t. And while the nearby Aviano Air Base provides plenty for Air Force personnel to do during the day, nocturnal diversions fall short.

But when asked about the local watering holes, those in the know point to the California Beer Parlor, a spacious establishment that gives Americans a place to kick back in an American way.

The bar has been open for about 20 years, said Antonella Pillinini, one of the owners. Decor in the bar has a decidedly American or English twist. Guinness signs coexist with American totem poles, pool tables and slot machines. Beers ranging from Guinness and Lowenbrau to German wheat beers are available on tap. The bar also features a drink called the California Zombie, which has seven kinds of alcohol in it and clocks in at about a liter when juice is added.

While the place fills up on the weekends, there are tons of seats and space to mill about with other servicemembers and the occasional local national who stops by.

Pillinini estimated that her clientele is about 60 percent American and 40 percent Italian.

The Parlor features standard bar food and a live band once a week.

A special van owned by the bar runs from Aviano Air Base to the bar every hour on Friday and Saturday nights, she said.

On a recent night, while everyone stared transfixed at Olympic figure skating on the bar&#8217;s big screen TV, Airman 1st Class Desaree Payne was the epitome of cool as she relaxed at the bar sans drink. That night, she was the designated driver for her group.

Drinks: A variety of tap beers for about 3 euros, mixed drinks.

Ambiance: Spacious and relaxed, with nary a hair of pretension. An easy place to walk in and get familiar.

Service: Reliable, familiar and friendly. The patrons seemed to be on a first-name basis with the staff, and drinks were fetched in a timely manner.