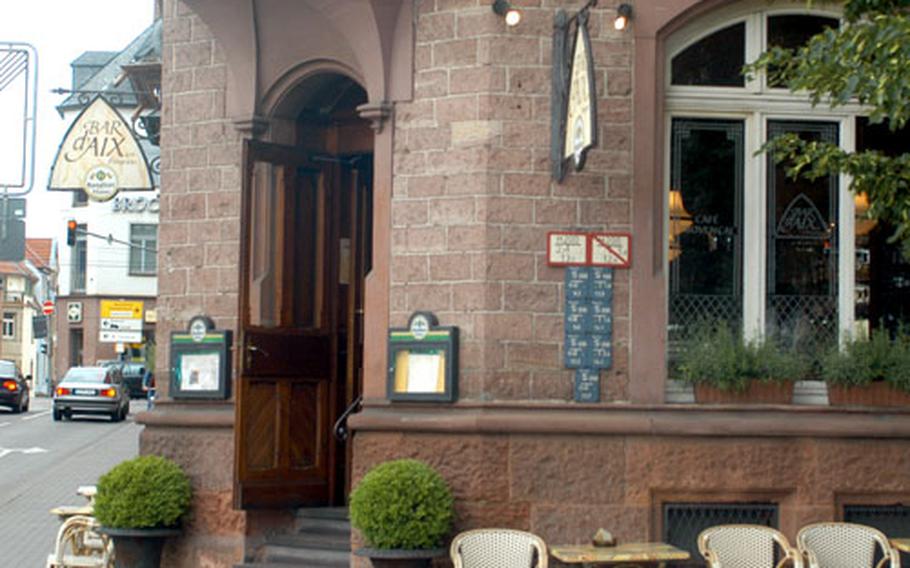 D’Aix en Provence, a bar across the river from Heidelberg’s aldstadt, provides a mental trip to France — and according to a self-described philosopher and regular patron, a chance to meet local “aristocrats.” (Nancy Montgomery / S&S)

I&#8217;m sitting in a little French caf&#233; and bar in one of the richest suburbs of Heidelberg before noon. Edith Piaf is singing, the bartender speaks French, Berber, Spanish &#8212; but not much English &#8212; and I&#8217;m drinking a cappuccino and considering what to have for lunch.

Yet somehow I seem to have stumbled into a conversation with Dieter, the arch, condescending German talk show host played by Mike Myers in old Saturday Night Live skits. But without the dancing.

The petite bar, which holds about 60 aristocrats, sits on a Neuenheim street corner across the Neckar River from Heidelberg&#8217;s aldstadt, and provides a little bit of France for just a few euro.

Robert, the owner, born in Nice to an Algerian father and Italian mother, has been in business a decade, providing more cocktails and whiskey, more aperitifs and digestifs, and way more French wine and champagne than is usually found in a Heidelberg bar. (Beer is also available.)

The ambience is soothing, charming and quite French, from Piaf and Charles Aznavour singing about l&#8217;amour, to the zinc bar, to the mellow sepia walls to the sconces and the little tables and brown leather banquettes.

Most patrons are German, Robert says, but some Americans are regulars, often appearing after they close down the Irish pub across the street. And although his bar is mostly a place for people to gather, drink and talk, Robert said, sometimes they want to dance.

Food: Sandwiches, salads, tapas, and a variety of cold plates.

Clientele: Said to be an older, wealthier crowd.