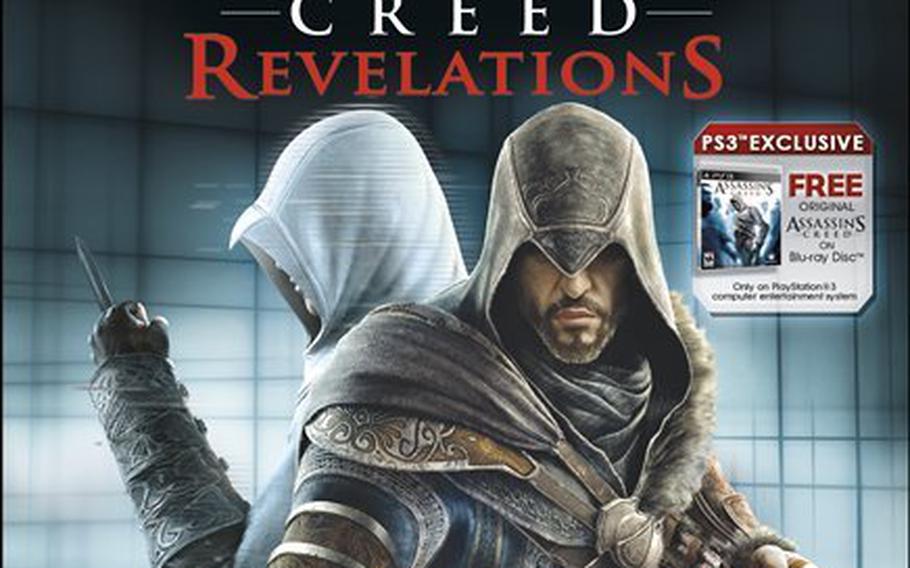 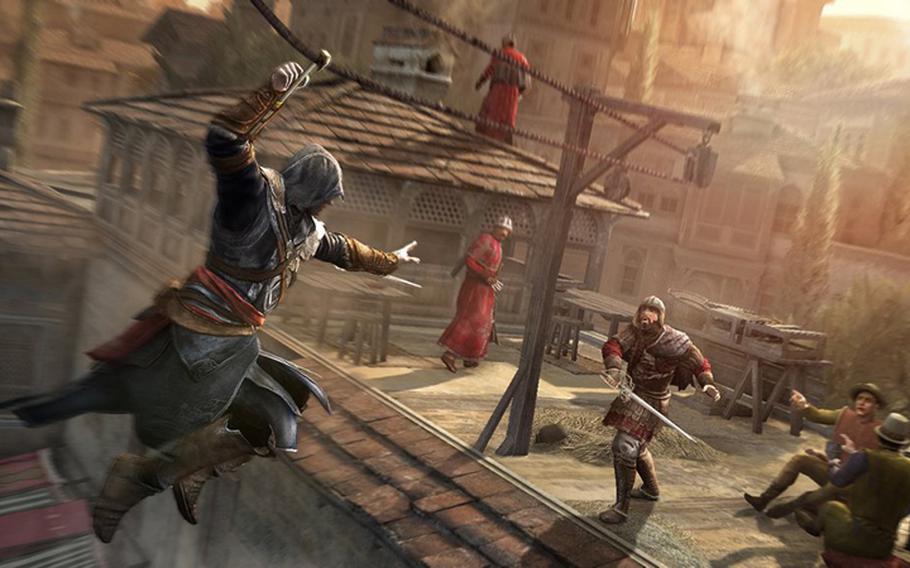 The assassin Ezio rides a zip line toward Templar soldiers in 'Assassin's Creed: Revelations,' which is set in Istanbul, Turkey. (Ubisoft)

Ubisoft’s “Assassin’s Creed” series has sprawled across several centuries and two continents as it has described an epic battle between the assassins and the Templars to determine the destiny of the human race. It has used elements of fighting, platforming, role-playing and strategy to tell its tale. The latest edition of the franchise, “Assassin’s Creed: Revelations,” offers all that and more — a bit too much more.

The tale revolves around Desmond Miles, a descendant of the legendary assassins Altair and Ezio Auditoe. As the story goes, Desmond was captured by the latter-day Templars — Abstergo Corp. — and hooked up to a machine known as the Animus, which allows him to relive the “genetic memories” of his ancestors in the time of the Crusades and the Renaissance. The problem is that all of this computerized time travel has scrambled his brain. “Revelations” begins with Desmond trapped in a sort of Animus safe mode, where he must complete memories of his ancestors in order to escape.

At its core, “Revelations” is a very entertaining game. For the bulk of it, you play as Ezio. This time around, Ezio is searching Istanbul, Turkey, for what appear to be ancient computer discs. The discs contain memories of the Crusades-era Altair and hold secrets that mustn’t fall into the hands of the Templars.

Along the way, Ezio must scale towers, bound across rooftops and slide along zip lines — possible now due to the addition of a nifty hook blade to his arsenal. He must recruit new assassins, rub elbows with the Ottoman ruling family and fight lots of battles to free the city of the Templars’ grip.

Personally, I’ve gotten rather tired of Desmond and would much rather focus my energies on his more interesting ancestors.

I was really anticipating getting to play as Altair again, but was disappointed. His missions are short and seem to be designed to provide additional backstory rather than entertainment. In addition, you have the weird situation where you are supposedly playing as Desmond, who is reliving the memories of Ezio, who is reliving the memories of Altair.

While I found all of this distracting, my biggest gripe was the new “castle defense” system that is used when the Templars try to capture an assassin stronghold. This requires that you put barricades in the streets and use sharpshooters, infantry and artillery to stave off the assault. Everything usually goes pretty well until the fire-spitting wooden tank shows up to sweep all your defenses away. The system isn’t all that fun, and it’s a huge distraction.

But enough of the gripes. There’s plenty to make “Revelations” worth your while.

The missions are interesting and well designed. And fans will be happy to know that the story line ties up many of the series’ loose ends and seems to bring interesting conclusions to the stories of both Altair and Ezio.

And the game looks great.

In addition, the controls are generally pretty good, allowing you to move freely as you treat Istanbul as your personal jungle gym.

Once again, the game offers online competition where players run, climb and leap across a map trying to slice or shoot each other.

The game earns its M rating because of violence and blood.

Bottom line: B Fans of the series are going to be willing to look beyond the clutter to find the fun. However, newcomers might want to consider starting with one of Ezio’s earlier adventures unless they have a fascination with Istanbul.