Buy Photo
The city hall in Asiago, Italy, displays the time for all to see. The town is known worldwide for Asiago cheese, but has considerably more to recommend it. (Jason Duhr/Stars and Stripes)

Buy Photo
The city hall in Asiago, Italy, displays the time for all to see. The town is known worldwide for Asiago cheese, but has considerably more to recommend it. (Jason Duhr/Stars and Stripes) 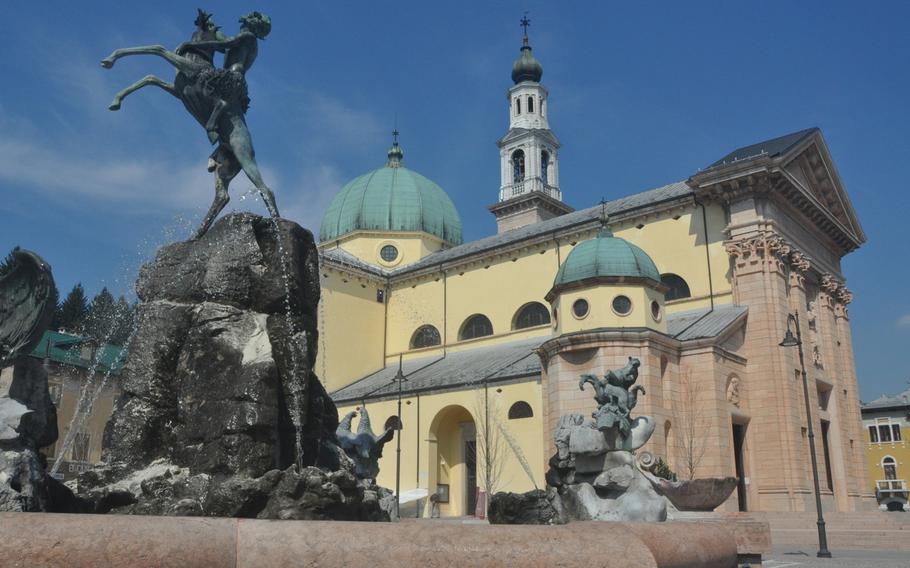 Buy Photo
A fountain adorned with a mythical satyr and majestic animals sits at the center of Asiago, Italy. The fountain sits next to the Cathedral of Saint Matthew, which was reopened in 1926, but dates as far bask as 1393. (Jason Duhr/Stars and Stripes) 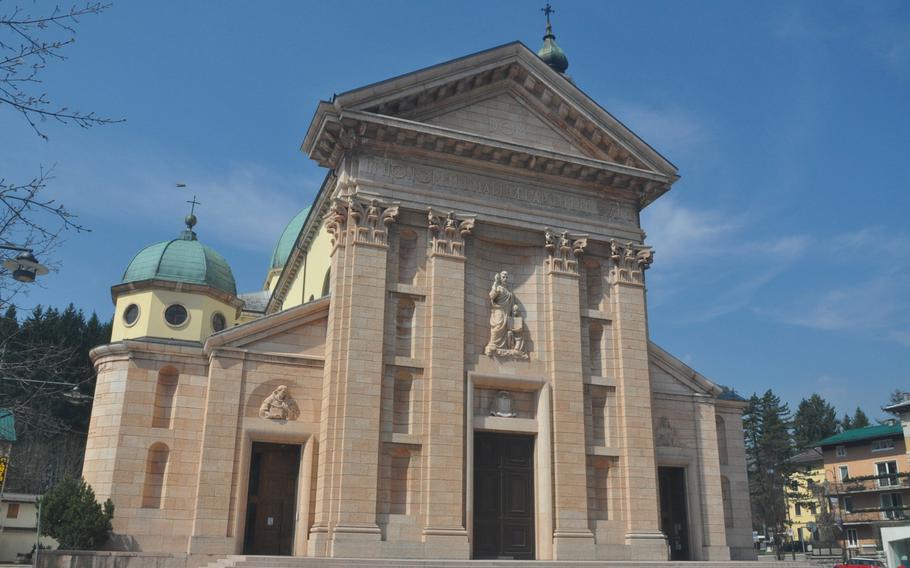 Buy Photo
The Cathedral of Saint Matthew was reopened in 1926 after its destruction during World War I and can be found at the center of Asiago, Italy. The cathedral dates as far back as 1393 and was built with red marble from areas surrounding Asiago. (Jason Duhr/Stars and Stripes) Buy Photo
The Leiten War Memorial, completed in 1936, is home to more than 50,000 soldiers who died in battle during World War I. The memorial is nestled atop Leiten Hill, overlooking the town of Asiago, Italy. (Jason Duhr/Stars and Stripes) Buy Photo
More than 50,000 crypts line the walls inside the Leiten War Memorial in Asiago, Italy. Each crypt displays the name of a soldier who sacrificed his life during World War I. (Jason Duhr/Stars and Stripes) 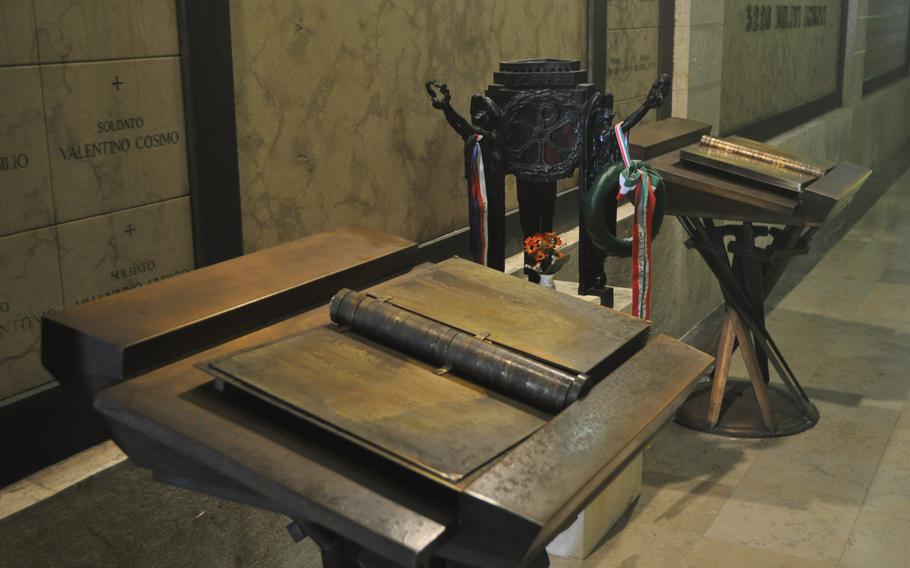 Buy Photo
Two metal books in the heart of the Leiten War Memorial in Asiago, Italy, contain the names of soldiers who died during World War I. (Jason Duhr/Stars and Stripes) Hemingway was said to have fought at Asiago, which was the location of a major battle during the war. The Austro-Hungarian military waged an attack that included 18 divisions and 2,000 artillery guns, which resulted in the near destruction of Asiago. The battle was intended to be the ultimate blow that would take Italy out of the war. During a time of darkness, if it wasn’t for the beautiful, mountainous countryside that helped the country diminish the enemy’s supply lines along the rugged terrain, Italy might not have been able to thwart the enemy’s continued attacks.

Home to its very own World War I monument, Asiago was nearly destroyed in the war. The Leiten War Memorial is said to hold the remains of more than 34,000 Italians and nearly 20,000 Austro-Hungarians who died in battle. This enormous crypt was completed in 1936 and inaugurated on July 17, 1938, in the presence of Italy’s King Vittorio Emanuele III. The memorial can be seen nestled on top of Leiten Hill, which allows the memorial to peer over the city as a reminder of events long passed.

Inside the crypt you’ll find images depicting the building of the memorial and of the many cemeteries that were once home to soldiers resting in the memorial today. Each corridor is lined with rows of names etched into marble, each marking the final resting place of a brave hero who fought for his country. These names are also written in two metal books, tarnished by time and worn from visitors and families who have paid their respects.

From the memorial, you can make your way to the center of town in less than 20 minutes by foot.

The town’s centerpiece is a beautiful fountain, which adorns a mythical satyr surrounded by a handful of majestic creatures. Steps away from the fountain you’ll find yourself on the steps of the Cathedral of Saint Matthew, the Apostle. It’s believed the first bricks associated with the church date as far back as 1393. Like most of the city, the cathedral was destroyed in 1916. Even though the church was reopened in 1926, the remarkable Italian craftsmanship from earlier periods is alive and displayed with the flowing red marble intertwined with statues of saints. The church boasts a 3,600-pipe organ and a tower that is home to six bronze bells cast in 1921.

Surrounding the center of town is an abundance of shops and cafes that might pique a shopper’s interest or a hiker’s energy level, since the town is set amid rolling hills. Take a moment to stop by a local meat shop and indulge in some of the region’s finest meats and cheese — Asiago, to be exact.

During the summer months, Asiago has an indoor ice rink, located west of the center of town, available for all to enjoy. Although limited on availability, a few hours on a Saturday or Sunday might be just enough to wipe out the wee ones before bed.

Soak in the fresh mountain air and enjoy an area full of hikers and mountain bikers in the summer — skiers and snowboarders in the winter. Flourishing in not only nature, the surrounding villages and countryside have an abundance of history. If one day isn’t enough time to take in the scenery or history, choose from the multitude of hotels or bed and breakfasts in the area.

Directions From Vicenza, take A31 north. At highway SS349, go right. Stay on SS349 up and over the mountain until you reach Asiago. Once you enter town, follow the information signs, making one right turn to Viale Stazione 5 stopping at the tourist office, which will be on your right.

Costs The memorial is free. Entrance to the ice rink costs 5 euros for adults and 3.50 euros for ages under 14 years. Ice skate rental costs 4 euros.

Food Asiago is famous for its cheese, which has varying tastes from sweet to bitter, partially depending on how long it’s been aged. They are all worth trying and can be found at local shops or the supermarket. The town has a wide array of food with influences from bordering neighbors, but has a traditional northern Italy cuisine.

More information Parking costs vary depending on where you park. If you choose to park outside the center of town, it is limited to one hour of free parking. Free parking is located at the ice rink, but can be limited due to special events. There is limited, but free, parking at the memorial. For more information on the ice rink’s opening hours through the summer months visit www.palaghiaccioasiago.it/orari.aspx.