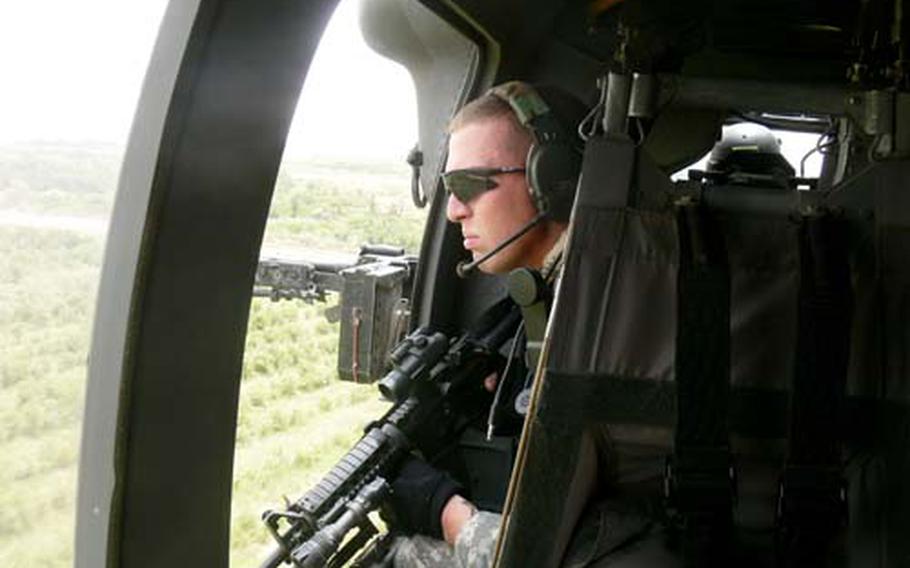 Army Sgt. Andrew C. Roe of the 501st Military Police Company out of Wiesbaden, Germany, is photographed in Iraq in late May 2008. Roe served in Iraq as a personal security officer for Brig. Gen. Raymond A. Thomas III, a 1st Armored Division deputy commander. While downrange, Roe was awarded the Army Commendation Medal with a “V” device for his actions during a 2007 firefight. (Courtesy of Andrew Roe)

Army Sgt. Andrew C. Roe of the 501st Military Police Company out of Wiesbaden, Germany, is photographed in Iraq in late May 2008. Roe served in Iraq as a personal security officer for Brig. Gen. Raymond A. Thomas III, a 1st Armored Division deputy commander. While downrange, Roe was awarded the Army Commendation Medal with a “V” device for his actions during a 2007 firefight. (Courtesy of Andrew Roe) The authors of valorous deeds are often modest souls.

They possess great humility, believing the act they performed was pedestrian and nothing more.

It was midday, Nov. 3, 2007, in the restive northern Iraqi city of Mosul. Army Cpl. Andrew C. Roe, a tall southpaw from Oklahoma, was serving as the personal security officer for Brig. Gen. Raymond A. Thomas III, a 1st Armored Division deputy commander.

Roe, Thomas and the general&#8217;s driver, Sgt. Aaron Cawthon, were in a six-vehicle convoy led by 2nd Battalion, 7th Cavalry Regiment soldiers. It was supposed to be a routine patrol of western Mosul. Cawthon was in the third vehicle, while Thomas occupied a seat in the fourth. Roe was riding behind the general in the next vehicle.

It was the first ground convoy of the deployment for the three 1st Armored Division soldiers, who had just arrived from Wiesbaden, Germany. They could not have found a testier locale.

Mosul, the second largest city and a haven for al-Qaida in Iraq, was an especially deadly place for U.S. forces. Just two days before this convoy, a roadside bomb had killed a company commander and another soldier with the 2-7 Cav. Since the beginning of hostilities in 2003, more than 250 servicemembers had died in Nineveh province, with most attacks in and around Mosul.

By nightfall, Roe would be in a field hospital recovering from a gunshot wound to his left hand. Thomas and Cawthon emerged unscathed from the midday firefight, though a staff sergeant and an interpreter were hit.

Despite his injuries, Roe shot and killed the gunman who tried to take him out. He did it without a complete trigger, part of which had been shot out. He also remained on the scene, forgoing immediate medical care to guard the general and the convoy&#8217;s exposed left flank.

The fact that he held his ground &#8220;is what probably moved me the most,&#8221; Thomas said later at an award ceremony for Roe.

For his role in the gun battle, Roe received the Army Commendation Medal with a &#8220;V&#8221; device, a Combat Action Badge and a Purple Heart.

In April 2005, he and a fellow soldier, Spc. Brandon Stover, pulled six Afghan laborers out of a burning building at Kandahar Airfield. Both later received the Soldier&#8217;s Medal for heroism.

So Roe and Stover went to lunch. Any accolades, they figured, could wait.

Less than an hour after leaving Forward Operating Base Marez, the convoy was in hot pursuit of a red Opel. Inside the vehicle were two men suspected of firing at least one rocket-propelled grenade at an Army helicopter.

The car pulled over and the two men dashed into a building on a street corner. The convoy stopped, too, and several 2-7 soldiers poured out of their Humvees to resume the chase on foot.

Roe stepped out as well, his overriding concern being Thomas&#8217; safety. Standing by the front of his vehicle on the driver&#8217;s side, Roe surveyed the area for potential threats when the first gun is discharged from a point off to his right.

Staff Sgt. Gabriel Rojas, Roe&#8217;s platoon sergeant, wasn&#8217;t on the scene that day but he said the Army believes the two men were part of a more &#8220;complex attack&#8221; involving multiple insurgents.

That first shot hit the base of Roe&#8217;s middle finger as he held his weapon high to his chest. Roe suspects the Kevlar-lined gloves he wore that day deflected the bullet just enough for him to avoid serious injury.

Gathering his wits, Roe saw the gunman off to his right on a balcony about 50 yards away. The young man was wearing a dark vest over his dishdasha, the cotton, light-weight traditional robe common in the Middle East.

His left hand bloodied and numb, Roe fired three shots, none lower than the man&#8217;s chest. Each hit their mark. It was the only confirmed kill of the firefight, which lasted no more than 10 minutes, according to Roe.

With gunfire erupting from several points off to his right, Roe managed to move up to Thomas&#8217; Humvee to check on the general, who was feeding .762-mm ammo to the gunner in the hatch. Besides the general, Roe was worried about the convoy&#8217;s left flank, which was largely exposed. Fortunately, nothing menacing would materialize.

Minutes later 2-7 Cav soldiers emerged with the two men. Roe and other soldiers filled the air with suppression fire to cover the team&#8217;s withdrawal.

During this sequence, a staff sergeant took a bullet to the back, but his Kevlar vest saved him from serious injury. An interpreter was hit, too, the bullet passing through his left triceps.

Thomas apparently didn&#8217;t know at the time his security officer had been hit because Roe remained visibly active and on the scene.