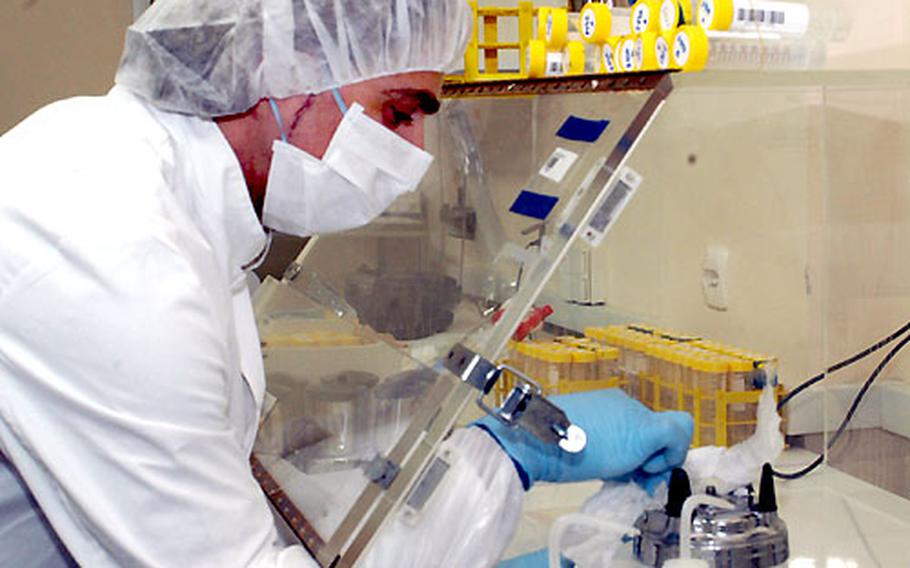 Damir Smajic at the International Commission for Missing Persons (ICMP) lab in Sarajevo grinds a piece of bone so that DNA can be taken from it. About 30,000 people have gone missing, presumed killed, during the 1992-1995 war in Bosnia, and another 10,000 in Kosovo. Since the ICMP labs opened in Bosnia two years ago, DNA analysis has allowed scientists to identify almost a thousand bodies already. (Ivana Avramovic / S&S)

Damir Smajic at the International Commission for Missing Persons (ICMP) lab in Sarajevo grinds a piece of bone so that DNA can be taken from it. About 30,000 people have gone missing, presumed killed, during the 1992-1995 war in Bosnia, and another 10,000 in Kosovo. Since the ICMP labs opened in Bosnia two years ago, DNA analysis has allowed scientists to identify almost a thousand bodies already. (Ivana Avramovic / S&S) 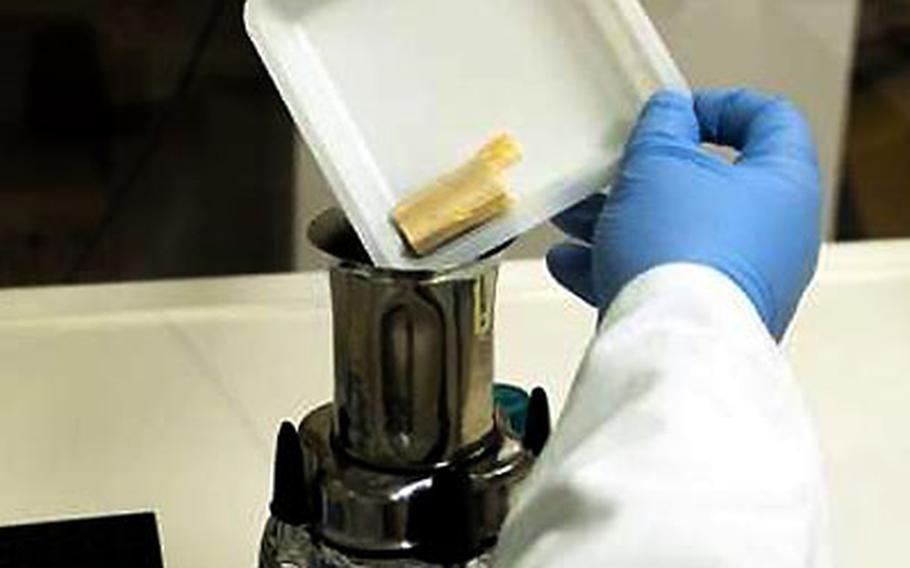 The DNA identification program developed in Bosnia and Herzegovina has helped thousands discover the fate of loved ones killed during the war, and will help thousands more.

But its importance does not end at the Balkans&#8217; borders.

Huffine and Gordon Bacon, the ICMP chief of staff, hope the ICMP&#8217;s work will prevent potential genocide in the future.

The ICMP forensics have identified more than 2,000 bodies exhumed from mass graves from across the country. They represent all ethnic groups.

But with the average case costing between $250 and $300 when there is one bone sample and two blood donors, the identification process is very pricey.

In most cases, the remains have come from secondary mass graves, which dramatically increases the cost because it is hard to assemble complete bodies, Huffine said, and DNA tests must be used.

To be able to identify all the bodies, ICMP needs a much larger DNA database from the survivors. Many have emigrated since the end of the war in late 1995 and need to be located to give blood.

In the first five years, the tests were done only once the victims had been identified based on their clothing to confirm their identity. Now the process is the exact opposite.

DNA samples from the bones are put into a database along with those from blood donors, and each is given a bar code. Only when there is a match is the victim&#8217;s name looked at. Then the surviving family members look at the clothes to confirm the identity.

First developed in Bosnia, the system of four interdependent labs, each concentrating on a different element of DNA analysis, was used as the model for the identification of those killed in the Sept. 11, 2001, attacks in the United States, Huffine said.

After the terrorist attacks, Huffine was one of the forensics experts working in Bosnia invited by the U.S. Department of Justice to attend a meeting on how to tackle identification of thousands of victims.

He shared the ICMP findings, taking notes and computer programs with him.

When Huffine left his former job with the U.S. military, which involved identifying American troops who died on foreign soil and were buried unidentified, he said scientists were using the mitochondrial DNA, which comes from the maternal line of the family and is more complicated to analyze and get positive identification from, as opposed to the nuclear DNA, a combination of mother&#8217;s and father&#8217;s DNA, which is used by ICMP in Bosnia today.

Since the beginning of the DNA project in Bosnia, the ICMP scientists have been looking for faster, cheaper and more efficient ways to extract and analyze DNA. They have improved the process of extracting DNA from bone samples and have 90 percent efficiency today, said Jon Davoren, the senior ICMP scientist overseeing the bone processing in Sarajevo.

They have also worked out many of the early computer glitches from two years ago and shared their findings with other scientists.

&#8220;What is stopping us from going faster at the moment is the money to do more laboratory tests,&#8221; Bacon said.

The ICMP forensics expect to complete processing the backlog of 8,000 bone samples this year.

They could do more DNA analysis if more chemical reagents were available. What they have, they must stretch throughout the year.

Conducting all the DNA tests in Bosnia saves money significantly, once all the materials have been gathered. Bacon, who is in charge of fund-raising, has been trying to work out deals with some of the global mail carriers like DHL and Federal Express to get lower postage rates for thousands of blood samples from the victims&#8217; relatives who have moved abroad since the war.

Different pharmaceutical companies have donated a lot of the chemical reagents or provided them at an extremely reduced cost, said Jenny Ranson, an ICMP spokeswoman.

Still, Bacon&#8217;s fund-raising efforts with the governments of the world have resulted in more failures than successes.

There are currently 13 donor nations, led by the United States, which provides 50 percent of the budget, and the Netherlands. Others include Denmark, Finland, Germany, Vatican City, Iceland, Ireland, Norway, Sweden, Switzerland, United Kingdom and British Council and Greece.

Thus far no money has come from the countries of the Muslim world, Bacon said, even though many or most of those the ICMP seeks to identify were Muslims.

Bacon believes the costs of DNA identification should be spread more evenly.

Identifying the missing would help resolve lingering uncertainty from the Bosnian conflict.

&#8220;Without the process of identification continuing, the whole question of conflict resolve will never be solved,&#8221; Bacon said.