Amorbach: The mutter of all museums 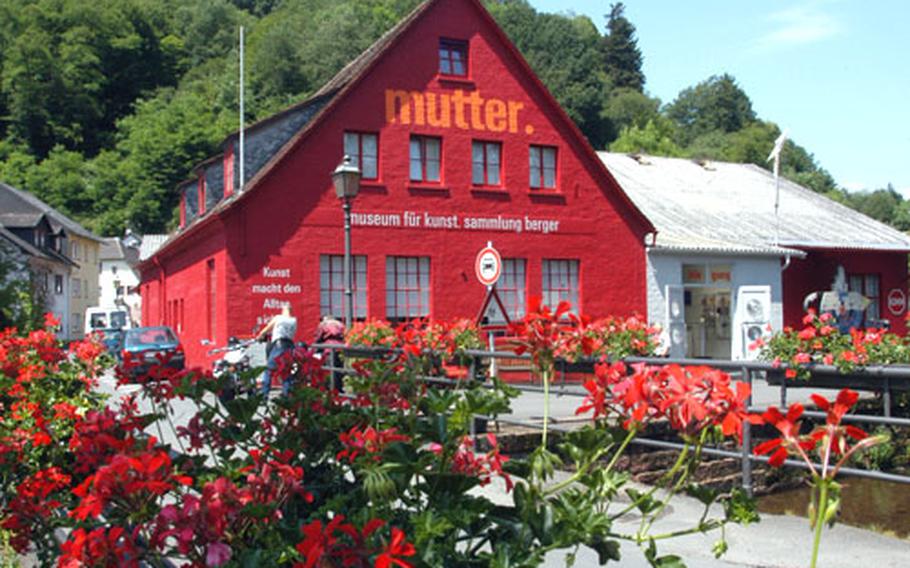 The mutter museum for art, collection Berger, is in Amorbach, Germany, about 60 miles southeast of Frankfurt. The collections include Pepsi-Cola items, wacky teapots, dolls and art. (Peter Jaeger / S&S)

The mutter museum for art, collection Berger, is in Amorbach, Germany, about 60 miles southeast of Frankfurt. The collections include Pepsi-Cola items, wacky teapots, dolls and art. (Peter Jaeger / S&S) 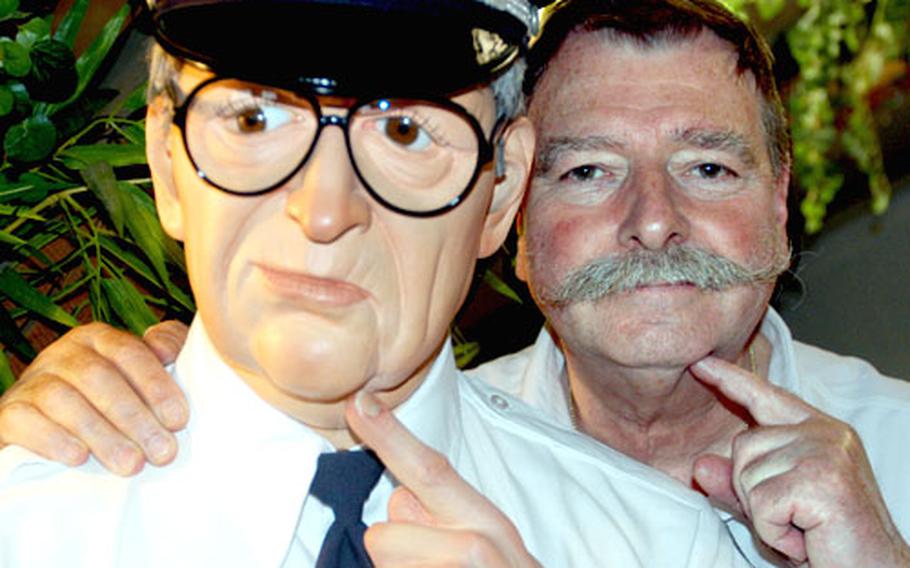 Michael Berger — art lover, collector, philosopher and bon vivant — poses with an artificial guard at the mutter museum, which he founded to house his mother’s collections. (Peter Jaeger / S&S) 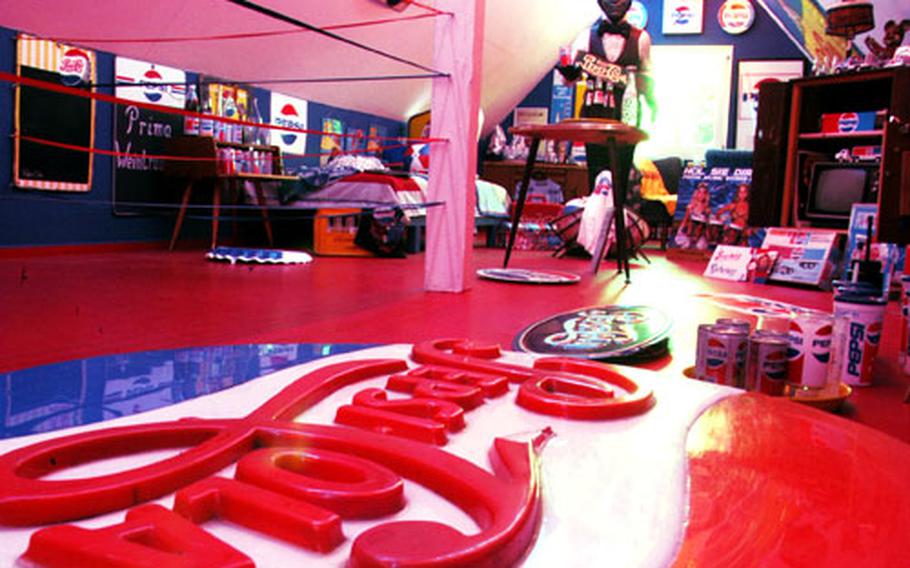 The extensive Pepsi-Cola collection of the mutter museum is displayed in the attic. (Peter Jaeger / S&S) 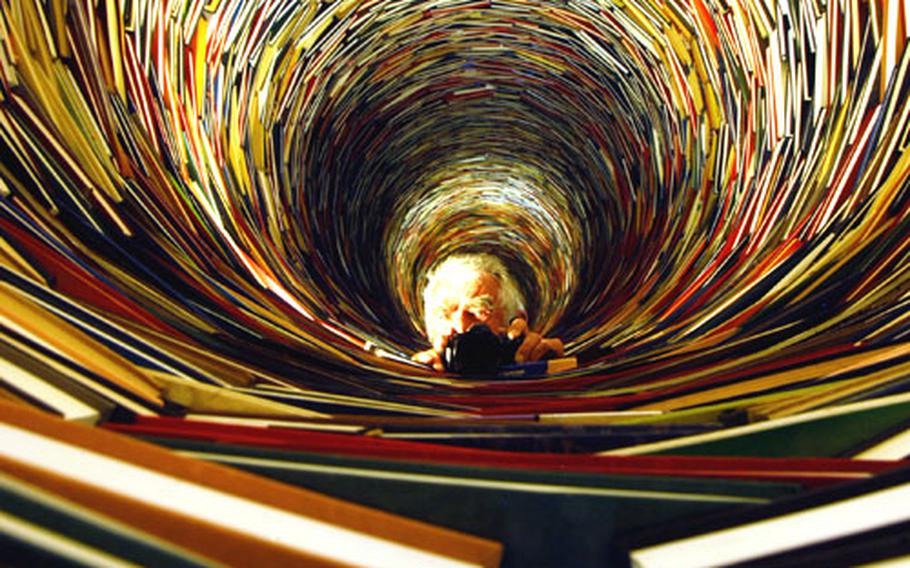 “Booktower,” a work of art by Slovakian artist Kren, is one of the surprising pieces at the museum. Hundreds of books and the photographer are refected by two mirrors, one at either end, creating an endless image. (Peter Jaeger / S&S) 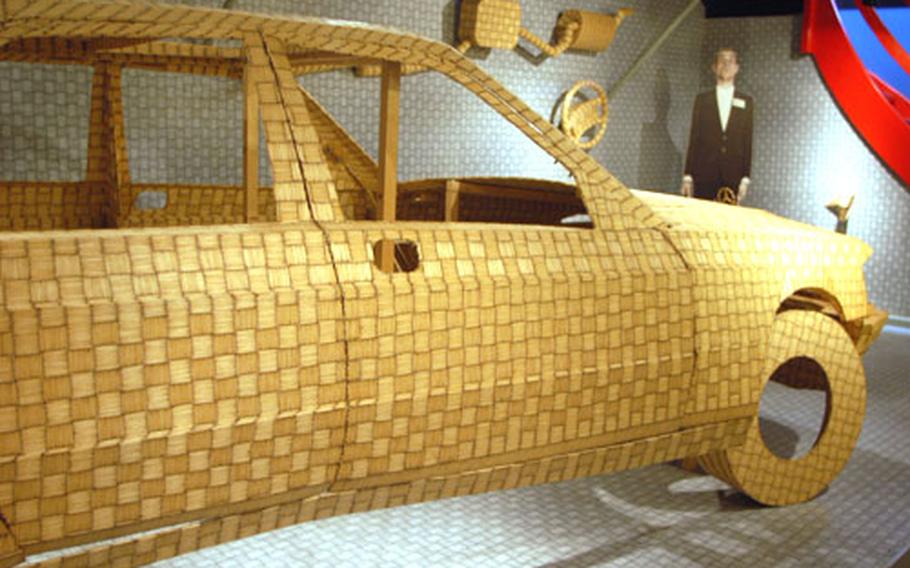 Another mutter museum oddity is this Mercedes made out of 500,000 matches, created by German artist Hans Wurst, whose image is display in the corner. A tape with his voice (in German) explains the production. (Peter Jaeger / S&S)

Looking for something special for Mom this year? How about naming a museum after her?

That is what Michael Berger, a German art collector and dealer of novelty gifts, did.

The mutter &mdash; or &ldquo;Mother&rdquo; &mdash; museum exhibits the collection of his mother, Eva Marie Berger, a self-made businesswoman, artist and collector. When she died in 1997 at age 88, Michael selected the name for the museum to honor his mother and her achievements. Painted in a deep red, the museum is one of the highlights of Amorbach, a small Bavarian town about 65 miles southeast of Frankfurt.

E.M., as she was known, arrived in Amorbach after World War II. She was a widow, like so many other German women who had lost their husbands during the war. Her husband had died in a plane crash, leaving her with three little children.

She picked Amorbach because she needed a caretaker for the children, and her mother lived there. Soon she began developing a business: She bought small ivory figures and ornaments in Erbach in the Odenwald and dealt them on American bases, often for coffee. Cigarettes and coffee were the unofficial currency in postwar Germany, so the coffee was a valuable commodity for many other transactions.

Business boomed, and soon Eva Marie had several small gift shops at various U.S. bases. She decided to open her own firm in Amorbach. In a short time she and 40 people from Amorbach and countless home workers around the region were producing simple wooden household goods, such as candleholders, piggy banks and Christmas decorations. In the gray years after the war, people wanted color and decorative items, and she gave it to them by putting color on everything she produced.

She was a no-nonsense businesswoman. She worked hard and demanded hard work from others. But her daughter- in-law, Ute, said she could be generous as well as demanding. And she had a great sense of humor. She gave one worker 200 extra marks for a good job (&ldquo;Pssst, don&rsquo;t tell the others,&rdquo; she said) while deducting 10 pfennigs from the hourly fee of a worker whose output she didn&rsquo;t like.

As a reward for her success, E.M. bought what became her trademark, a vibrant red Mercedes Benz convertible &mdash; one of only two such cars in postwar Germany. (The other one was owned by Rosemarie Nitribitt, a notorious Frankfurt call girl who was killed in her apartment. E.M. laughed heartily when she was told.) She owned five cars in her lifetime &mdash; all red Mercedes convertibles.

But things did not work out so well at home. Being on the road so much, E.M. could not spend enough time with her children and their education.

Michael, her youngest son, said the children grew up with little supervision. He was kicked out of several schools, and ended up working at his mother&rsquo;s firm for some years. It was a stormy relationship between two strong characters. It ended with them going separate ways.

Michael left Amorbach in 1968 and founded his own firm in Wiesbaden producing gag gifts and funny presents. They were things that nobody really needs, but good presents when not sure what else to buy, such as soap shaped like a female bust, toilet paper printed as 100-mark bills or a visitor&rsquo;s book for the bathroom.

Michael&rsquo;s business became more successful than his mother&rsquo;s. The love-hate relationship turned into a lifelong rivalry. E.M. even had the audacity to lure good employees from Michael&rsquo;s firm, just to show who was still boss.

The rivalry took on a new form. While E.M. collected old dolls as a hobby during her younger years, Michael got interested with day-to-day culture and started collecting on a big scale in the 1970s. He collected paraphernalia with Coca-Cola, Mickey Mouse and Marilyn Monroe, old advertising signs, walking sticks, plastic bags from shops and many other subjects. Searching flea markets and auctions, he became an authority on collectibles. He also got interested in modern art and became a patron for young artists. His collection of Fluxus art &mdash; an interdisciplinary movement in which one art form flowed into another &mdash; is one of the best in Germany.

In 1989, Michael opened the Harlekin&auml;um, called the craziest museum of the world by its founders. It displays all the strange products of Harlekin Presents, Michael&rsquo;s company, in fantastic, imaginative exhibits.

His mother, who watched his development with both pride and a certain jealousy, declared &ldquo;What he can, I can do.&rdquo; Although she was in her 80s, she went right to work, transforming her business into a museum.

Michael had built a Coca-Cola collection, so she bought a Pepsi-Cola collection. Daughter-in-law Ute, whom E.M. adored, had a teapot collection, so E.M. asked her to help her to get something similar. Ute gave her her own collection as a present for a start, and E.M. took it from there, launching a worldwide hunt. In no time her teapot collection reached 2,500 items, making it the biggest, craziest collection in Germany. Teapots of all shapes, ages and designs are displayed in a gigantic greenhouse. Visitors can meet Margaret Thatcher, President Reagan or Mickey Mouse and the Statue of Liberty &mdash; teapots all &mdash; and admire the teapot Napoleon took along on his wars.

E.M.&rsquo;s small doll collection grew to 500 and was put on display in an oversized dollhouse. Nearby she keeps a collection of about 100 old teddy bears, who appear to be locked in prison.

Her lifelong passion for art, inherited from an artist father, is shown on the ground level of her museum. Works of many famous members of the modern-art scene are presented in several rooms. Highlights are a full-size Mercedes Benz made of 500,000 matches created by artist Hans Wurst, and a book tower by Slovakian artist Kren.

The museum was officially opened to the public in April 1995. Eva Marie lived two more years to enjoy the success of her museum, the admiration of visitors and the continued respect of her friends.

She was remembered by her many friends for her sparkling eyes and big grin, racing around the corner in her red Mercedes, sitting in the open with her curly black hair blowing in the wind.

And her son, with whom she had a mutual rivalry and love, recalled her fondly, too. He paid her one final compliment: He decided the collection of all that meant so much to her could have no better name than &ldquo;mutter.&rdquo;

This museum of items collected by Michael Berger is in Wiesbaden-Erbenheim off Autobahn 66, Exit 6, close to the Army-Airfield Erbenheim. The blue building is at Wandersmannstrasse 39 in the town center. It is open from 11:11 a.m. to 5:17 p.m. Sundays between 1 April and end of August. Entrance fee is 1.99 euros for children and 2.99 for adults. Guided tours up to 10 are 20 euros.