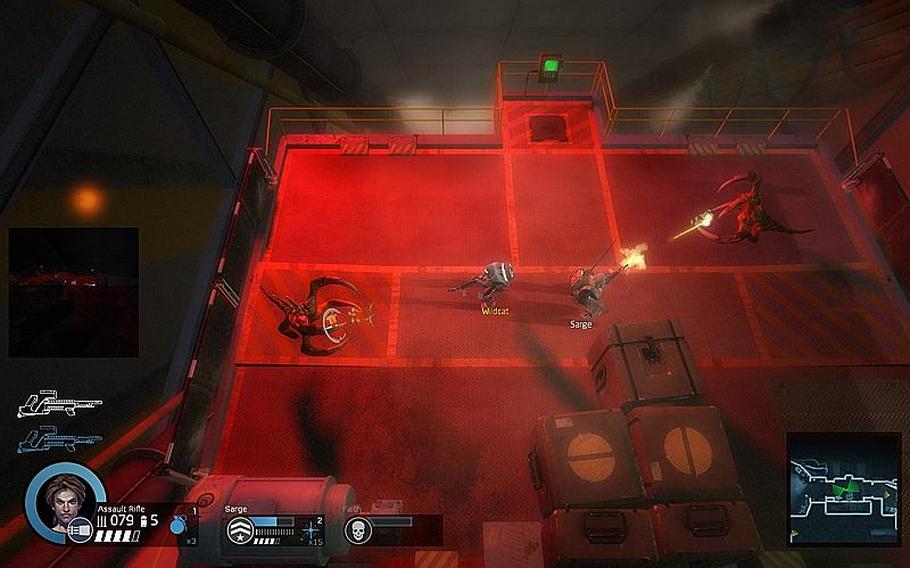 'Alien Swarm' pits you and your friends again hordes of extraterrestrial baddies. ()

From the creators of such iconic first-person masterpieces as “Half-Life,” “Portal,” “Team Fortress” and “Left 4 Dead” comes … a top-down action game. For free. Huh? That’s the reaction I’m sure a lot of gamers had after Valve’s most recent, and unexpected, release: “Alien Swarm.”

Developed quietly by an Unreal Tournament mod team the company took under its wing two years ago, this co-operative sci-fi shooter took a backseat as Valve readied “Portal 2” and “Left 4 Dead 2.” Those are first-person shooters, though, which makes the release of “Alien Swarm” — a free game through Valve’s ever-growing digital distribution service — all the more impressive.

The basic premise is this: You and three buddies choose between four different classes — officer, special weapons, medic or tech — and blast your way through hordes of aliens to advance through the levels. There’s a long list of weapons and equipment that players can choose from, and players unlock new weapons as they earn experience from mission objectives. Levels demand different character and weapon combinations and, at least on the harder difficulties, your team will have to feel out what’s needed and what’s not until you find the right balance.

While each level — seven in all — can be blasted through relatively quickly, the constant swarm of aliens really keeps everything hectic. Whether your team finds itself in cramped corridors or lost in a large labyrinth, not knowing where or when the next huge wave will attack ramps up the panicked feel every step along the way.

In each mission, varying objectives help to spice things up. Interact with the environment to blow through some rocks, blast a path open, or hack into a computer to open a door; all the while you and your teammates have to balance who does what while guarding against incessant alien critters.

“Alien Swarm” isn’t going to max out your system specs with its graphic settings, but it doesn’t skimp, either. Bright blues and yellow weapon blasts burn and pop against the industrial sci-fi backdrop. The “Aliens”-inspired environment, coupled with the nonstop onslaught of enemies from all directions, makes for a very claustrophobic atmosphere.

Valve has built many great gaming experiences on panicked settings, be it huge robots confrontations in “Half-Life 2,” or zombie hordes in “Left 4 Dead,” but this is probably the most intense they’ve done so far, especially on the harder settings.