Airmen, families at Incirlik Air Base have a world of options 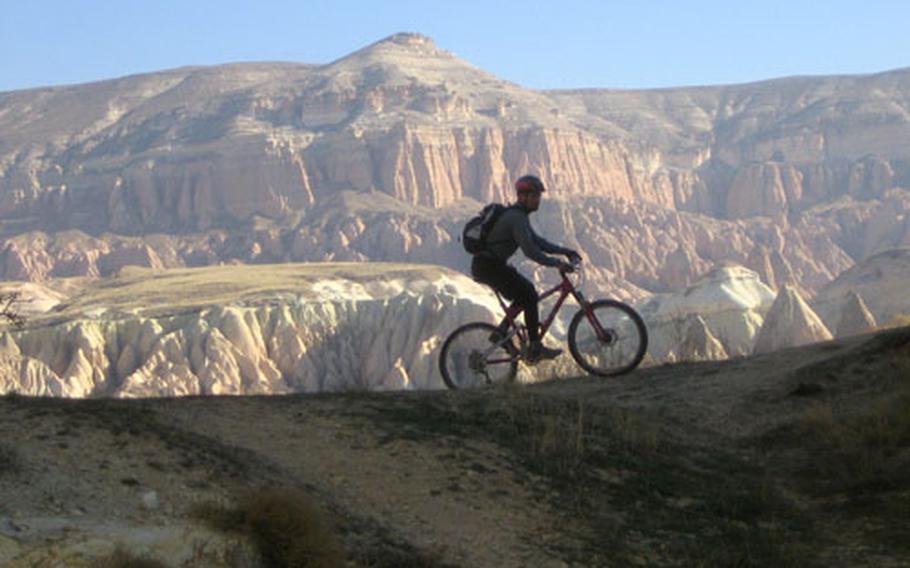 Chris Whitener, director of outdoor recreation at Incirlik Air Base in Turkey, rides a bike in the Cappadocia region, a few hours away from the base. Outdoor Rec and Information, Tickets and Travel offer a variety of trips off base. (Photo courtesy of U.S. Air Force)

Chris Whitener, director of outdoor recreation at Incirlik Air Base in Turkey, rides a bike in the Cappadocia region, a few hours away from the base. Outdoor Rec and Information, Tickets and Travel offer a variety of trips off base. (Photo courtesy of U.S. Air Force) 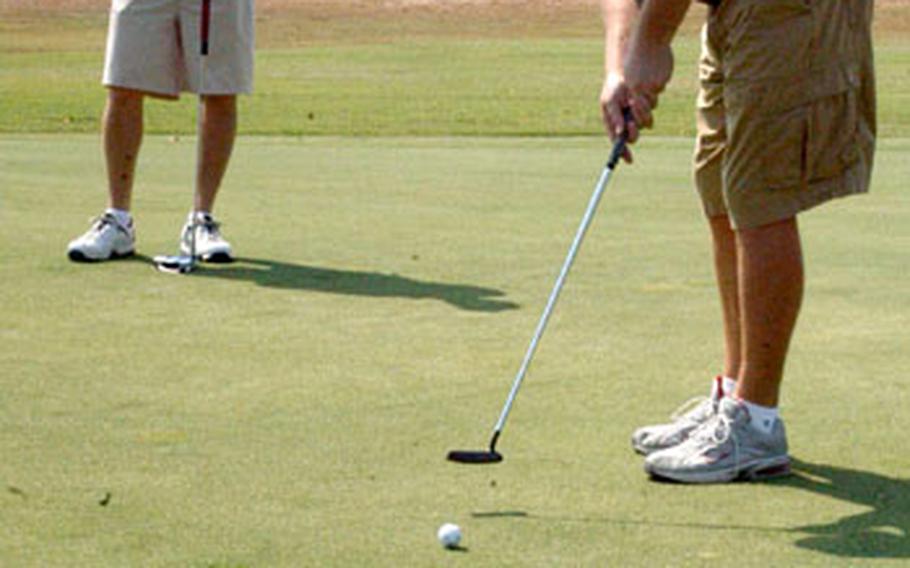 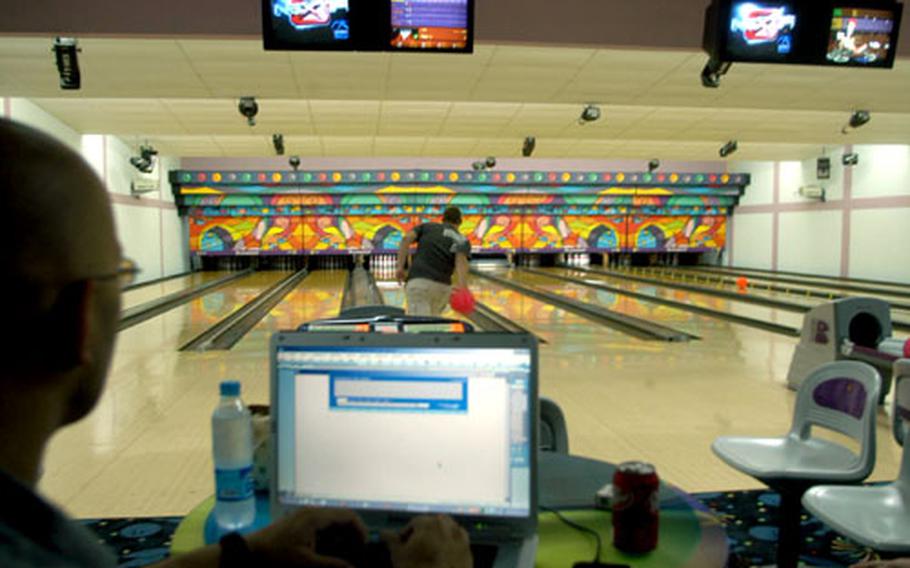 Senior Airman Jeremy Foster takes advantage of the wireless Internet service available in the bowling alley at Incirlik Air Base while waiting for his turn to toss a ball down the alley. The free service is available at several locations around the base. (Kent Harris / S&S) 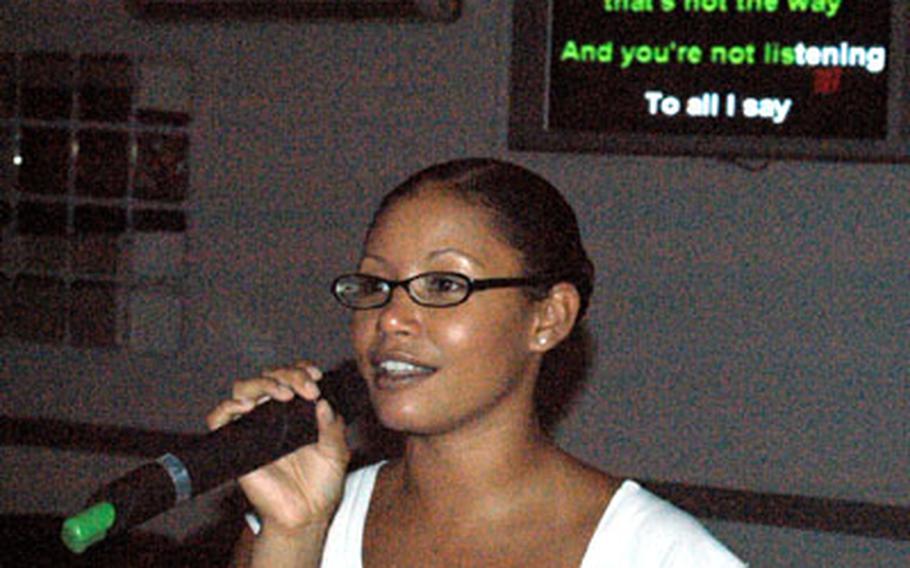 Senior Airman Erinn Powell gives karaoke night a go at the enlisted half of the base club. Airmen can sing along with the music once a week. (Kent Harris / S&S) 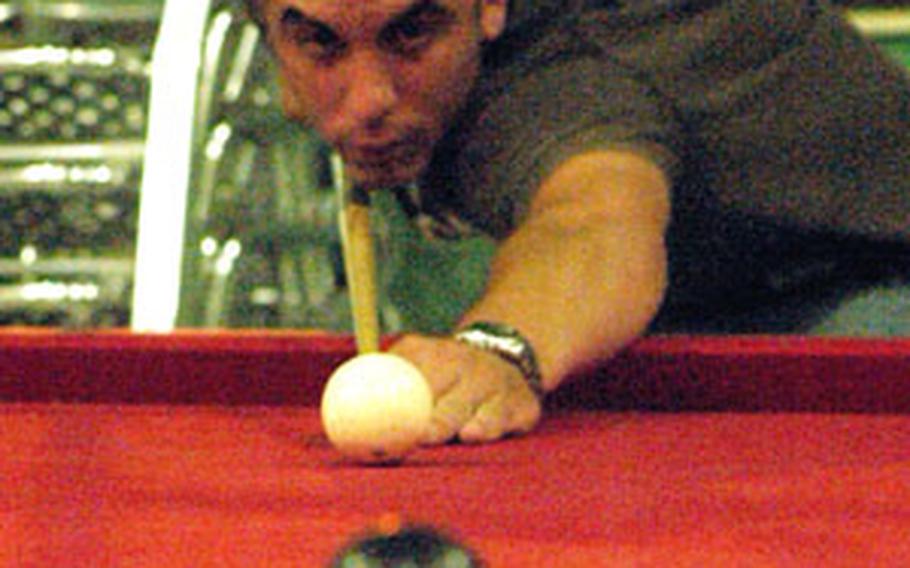 Airman 1st Class Andy Schreacke lines up a shot while playing billiards at the enlisted half of the base club at Incirlik Air Base. (Kent Harris / S&S)

U.S. military communities in Europe are sometimes referred to as islands of Americana surrounded by foreign cultures.

Nowhere is that as true as at Incirlik Air Base, Turkey &#8212; the only permanent duty station in the U.S. European Command where all servicemembers (and most civilians) work and live on base.

Since the 1,600 or so airmen assigned to Incirlik spend more time on base than their counterparts in Europe do, the base works hard to keep them entertained.

Most activities and programs fall under the umbrella of the 39th Services Squadron. They&#8217;re designed to give airmen and dependents something to do in their free time on base and off.

She has an inside source when it comes to information about Outdoor Recreation. Her husband, Chris, runs the department. This is his first overseas assignment after working at military facilities in the States for about seven years.

&#8220;The mentality that we&#8217;re trapped here&#8221; probably helps to increase participation in the programs that are offered, he said. And those programs, by their nature, challenge that concept. There are trips on the weekend for those interested in snorkeling, scuba diving, tubing, bicycling, hiking, paintball, kayaking or fishing.

Whitener said many airmen seem to pick something they enjoy and concentrate on it. So if there&#8217;s an activity his department can support that&#8217;s not on the list, his staff will give it a try. He and his wife recently went paragliding, for instance.

For those who want to go farther off base, there&#8217;s Information, Tickets and Travel.

Sometimes, however, that trip is a very short one. A street filled with restaurants and shops selling items from furniture to clothing and anything remotely touristy is just outside the gate.

&#8220;I think a lot of times, we find ourselves hanging out in the Alley,&#8221; Angelini said, using the American term for the street.

People don&#8217;t have to go off base to eat, though. The base has more than a dozen places to buy a meal &#8212; only a few of them operated by the Army and Air Force Exchange Service.

Several, including the restaurant in the base&#8217;s bowling center run by Giovanni Letore, offer delivery service, so airmen don&#8217;t even have to leave their dorms.

But staying in their rooms is frowned upon by those who operate the various activities.

The base&#8217;s small population means there are no reservations for tee times. Fees range from $6 to $13 for 18 holes. The course might not challenge Tiger Woods, but it&#8217;s good enough to have kept Tech. Sgt. Howard Hall in practice. Hall, the defending golf champion for the entire Air Force, recently left the base for the States, but was a fixture on the course during his tour in Incirlik.

Letore runs a 10-lane bowling alley that &#8212; like many facilities around base &#8212; offers some kind of promotion most nights during the week. Bring a wingman on Wednesday and bowl two-for- the-price-of-one. Buy lunch during the week in uniform and bowl for free.

And it&#8217;s not just about bowling and eating: The center is one of several places on base with wireless connections to the Internet.

The on-base club, divided between enlisted and officer sections, is currently undergoing $140,000 in renovations on its ballroom. It, too, holds several promotions during the week, including karaoke, poker and specialty dancing. Its bingo pot topped $1,000 during the last week of August.

People can learn some of those specialty dances at the community center, which also offers instruction on piano, drums and guitar. It also operates an ice cream truck that runs through the base neighborhoods, prompting kids to give chase.

Hot temperatures make the base pool a popular place. Chris Whitener said there are actually too many proposed uses for the facility. Between lap swimming, practice sessions for scuba courses and parties for various units, there&#8217;s not a lot of pool time to spare.

The base still manages to fit in a few quirky events, including a fishing rodeo (introducing about 400 fish into the pool), a day for owners to take their dogs into the pool with them, and a movie night where the audience watches from tubes while floating on the water.

An 18-hole miniature golf course is next to the AAFES movie theater. It&#8217;s a bit farther to a skeet-shooting area, and to an area set aside for paintball. Whitener said he hopes that a course for go-carts will be built soon.

Those who want to engage in less athletic activities have options, too. The base library has books and DVDs, and plans to start showing an educational movie on Thursday nights &#8212; the only night that the AAFES theater isn&#8217;t showing something. The Arts and Crafts Center offers material, classes and work space for woodworking, framing, ceramics, painting, photography and scrapbooking.

The base chapel offers a variety of programs, and sponsors the Crossroads cafe on Friday and Saturday nights. One airmen joked that someone could participate in chapel-run events and eat free for six days a week.

After all, people need to keep their energy up for all the activities going on at Incirlik.