After Hours: Weberstübchen near Ramstein Air Base caters to carnivores 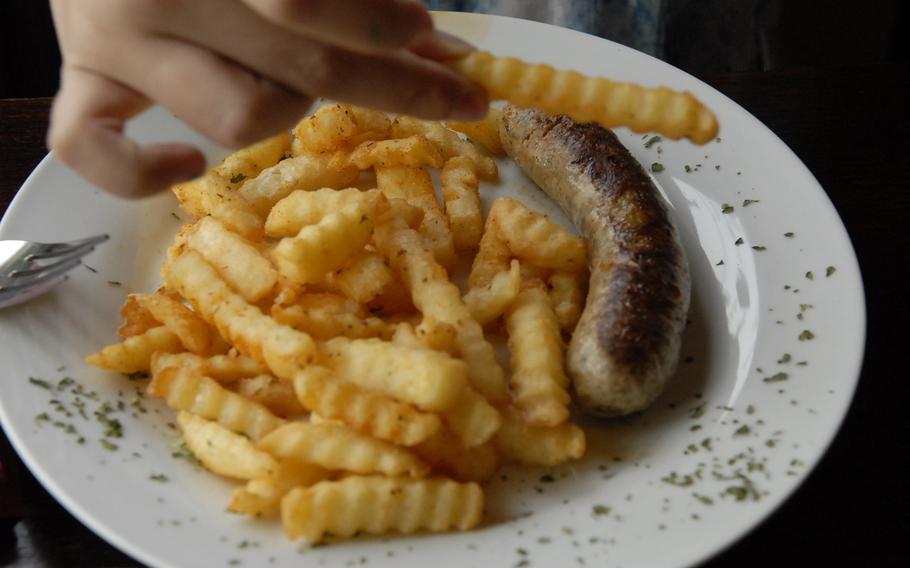 One of the most popular items at Weberstübchen, near Ramstein Air Base, is Thomas Walter's homemade German bratwurst, pictured here in the children's portion. (Jennifer H. Svan/Stars and Stripes)

One of the most popular items at Weberstübchen, near Ramstein Air Base, is Thomas Walter's homemade German bratwurst, pictured here in the children's portion. (Jennifer H. Svan/Stars and Stripes) 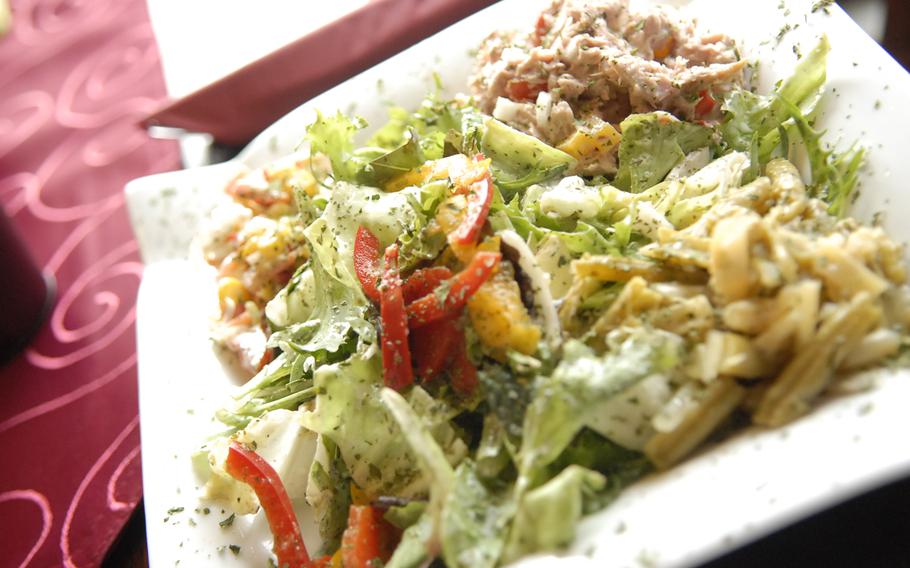 Though meat dominates the menu at Weberstübchen in Ramstein-Miesenbach, Germany, some lighter fare, such as this salad with tuna, onions and pasta, is also available. The eatery has a wide variety of pork, beef and turkey dishes. (Jennifer H. Svan/Stars and Stripes) Turkey steak marinated in a garlic sauce came with a side of "potato chips," fried potatoes that look like chips, at Weberstübchen, a German restaurant on the outskirts of Ramstein-Miesenbach. (Jennifer H. Svan/Stars and Stripes) 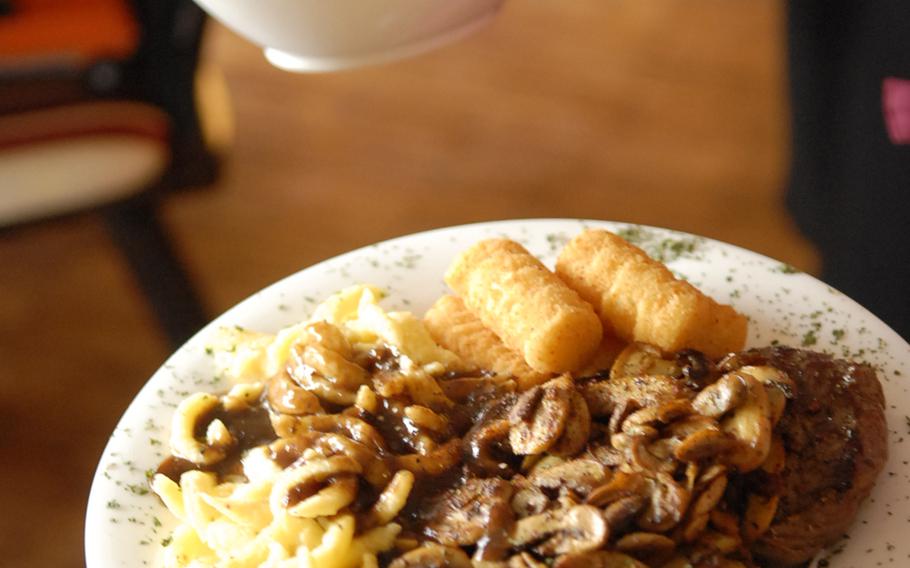 One of the signature dishes at Weberstübchen, a German restaurant on the outskirts of Ramstein-Miesenbach, near Ramstein Air Base, is a big slab of beef steak in special house gravy with mushrooms. (Jennifer H. Svan/Stars and Stripes)

If you’re a vegetarian, there’s not much you can sink your teeth into at Weberstübchen, a German restaurant on the outskirts of Ramstein-Miesenbach, near Ramstein Air Base.

If you’re a carnivore, the only problem you’ll have is deciding what kind and cut of meat to devour — and how much.

Thomas Walter, who runs the restaurant with his partner, Chris, is a butcher by trade and the three main types of meat prepared in the kitchen have their own section in the menu, each taking up almost a full page.

For those who prefer beef, there are 10 selections of rump or rib-eye steak, including the “XXL” versions for the Fred Flintstones of the world — 400-gram slabs of either cut cooked to order.

Pork rivals the beef choices with a variety of steaks and schnitzel available, from “hot chili steak,” a spicy pork steak, to Parmesanschnitzel, a breaded and fried schnitzel, oven-baked and served with Bolognese sauce and cheese.

What I wanted is available only on Friday nights: the salmon steak in a Riesling-dill cream sauce, served with rice and vegetables. I opted for pork’s white meat cousin and ordered a turkey steak. It was tender, thick and basted in a garlicky marinade. I chose the “potato chips” for a side. The thinly cut potato disks were a nice change from french fries.

I was perfectly satisfied, or at least I thought. But upon further review of the menu and after talking with customers who came in after we ordered, I realized I missed an opportunity to try something a bit more exciting than plain ol’ turkey steak. The turkey steak Mediterranean — oven-baked white turkey meat with tomatoes and mozzarella cheese; the turkey goulash with spätzle noodles or penne pasta; and the homemade Pfälzer sausage all sounded enticing.

Walter used his training in the meat department to make Weberstübchen “the butcher’s restaurant,” his nickname for the place he and Chris have transformed into a family-friendly, cozy, meat- and beer-lovers’ haven.

Though the food is German, Americans will find it as welcoming and comfortable as any family-style restaurant in the States. The menu is in German and English, and Walter, who speaks English well, makes a point of getting to know his customers on a first-name basis. His clientele, he said, is about 80 percent American.

Many customers are regulars. Weberstübchen’s “fan club” is up to 78 members, with 16 of those earning the proud status of giant German beer mug owners, courtesy of Walter.

Throughout the year, Weberstübchen has special events, such as a buffet with Santa Claus on the German St. Nikolaus holiday in December. On Sundays throughout spring and summer, Weberstübchen will do an outdoor barbecue, Walter said. The grill is fired up about noon, he said.

“My philosophy — I want people to have a nice time and enjoy the food and the rest comes by itself, I guess,” Walter said. “If they like it, they come back.”

Menu: In German and English.