After Hours: Unique eats and good times at Okinawa’s Crocodile 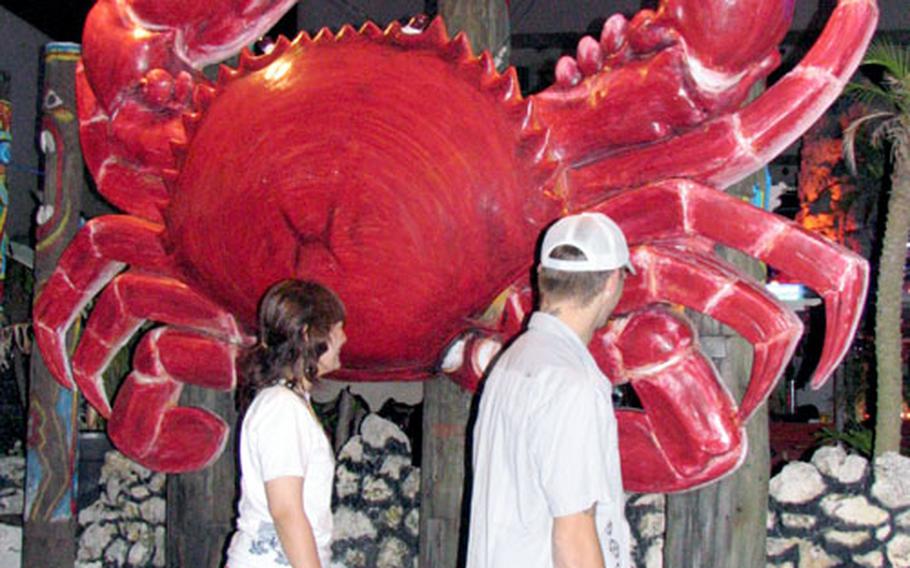 Look for the giant red crab sculpture at the entrance to the Crocodile Seafood & Bar in Chatan, Okinawa. (David Allen / S&S)

They&#8217;re tasty tempura balls of crocodile meat &#8212; the tails, to be exact, served with a spicy dip. And as far as we know there&#8217;s only one place on Okinawa where you can get them: the Crocodile Seafood & Bar in Chatan, about a block away from the huge Ferris wheel in the restaurant and shopping mecca known as American Village.

You can&#8217;t miss the place. It&#8217;s on the east side of the parking lot that&#8217;s across from the Jusco Mall. The entrance is marked by a huge red crab sculpture and a neon sign. On Okinawa&#8217;s abundant rainy days there is a dining room with a wall of waterfall windows.

The croc fries are just one of the strange appetizers on the menu. For 750 yen you get five served on a wooden platter. At first taste, it&#8217;s akin to chicken &#8212; you expected something else? Maybe a bit chewier, but tasty nonetheless.

But we&#8217;d recommend you go light on the appetizers if you intend to indulge in a main course. There was more than enough on our platters of ribeye steak (1,800 yen), Cajun chicken (1,500 yen) and snow crab (1,900 yen) to fill us up, and there still was enough to share.

The beer was more than reasonable, 480 yen for selections ranging from the local Orion on tap to Heineken, Corona and even (though we can never understand why) Budweiser.

But the specialty is cocktails, all sorts of boat drinks and tropical concoctions, which range from 380 yen to 680 yen. All the favorites are on the menu, plus a couple we never heard of.

I also shunned the &#8220;buri-tus&#8221; shots advertised as &#8220;one sip and you lose your conscious.&#8221; Likewise, we laughed at the thought but refrained from feeding each other the advertised bugs and scorpions.

For saner fun, we limited ourselves to a few games of pool (darts, slots and table Jenga blocks also were available) and a visit to &#8220;Coco,&#8221; a 6-year-old crocodile kept in a fenced enclosure. Visitors are warned not to shake hands with her.

Rating: Six beers out of a six-pack

Clientele: Mix of servicemembers and Okinawans

Location: Near American Village in Chatan, one block west of Highway 58 and Camp Lester. Look for the huge red crab.