After hours: Supersized servings leave no room for seconds 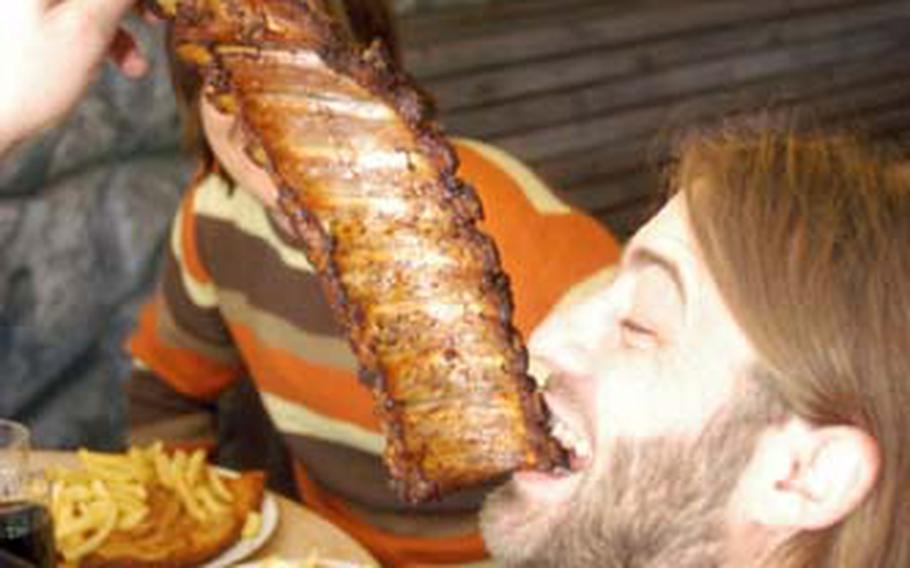 Christian Hahn of Wittlich, Germany, tears into a slab of baby back ribs during a recent visit to the Waldgeist Restaurant, located near Hofheim between Frankfurt and Wiesbaden. In addition to oversized plates of ribs, the restaurant offers super-duper large schnitzels, sausages, cheeseburgers and rumpsteaks. “It was a touch too much,” Hahn said after his feast. (Kevin Dougherty / S&S)

HOFHEIM, Germany &#8212; A pair of plates piled high with slabs of baby back ribs arrives at a restaurant table occupied by Paddy P&#252;tz and three of his pals.

Dinosaur ribs aren&#8217;t on the Waldgeist Restaurant menu, but several of its dishes come in mammoth portions. Consider the three-pound double cheeseburger, or the two-pound schnitzel that hangs off the lip of the plate, or the German sausage that looks like a bloated billy club.

There&#8217;s been much buzz in recent years about Americans and their bulging waistlines, but Germans appreciate a hearty meal, too. And few places can match the portions the Waldgeist dishes out.

"They want to eat and be entertained," said Dario Golisano, an assistant manager at the Hofheim location, "so they order the big things."

The clientele at the Waldgeist is a mixed plate. You&#8217;ll see plumbers and punk rockers, men in suits and tourists with cameras, senior citizens and American servicemembers.

The decision to offer giant-size portions evolved out of a challenge seven years ago between the owner, Christoph Hahl, and some of his friends. They dared him to go large, Golisano said, and "so started the big plate."

When P&#252;tz and his pals bellied up to their table, there wasn&#8217;t a crowd, partly due to a heavy midday snowfall. On weekends, it&#8217;s a totally different story, especially at night when a reservation is the surest way to secure a seat.

Amelie K&#228;fer, a waitress, says many customers take the bait to go big. Glancing at the menu, it&#8217;s hard not to be tempted by a dish that starts with five "Xs" before the word "large" comes into play.

Because very few customers finish their food, the restaurant offers people doggie bags for their leftovers, a rarity in Germany. On a weekend night, K&#228;fer said the kitchen will go through as many as 20 rolls of aluminum foil.

To see previous After Hours reviews, go to: legacy.stripes.com/afterhours.

Prices: Moderate, considering the size of the portions. A supersized serving of schnitzel cost about $20, but can easily feed a few people. A family of four can eat well for about $45, and leave with leftovers.

Location: There are two restaurants: Waldgeist Hofheim, between Frankfurt and Wiesbaden; and Waldgeist zur Eisernen Hand in Wiesbaden-Taunusstein. The Hofheim restaurant is located off of A-66 at the Diedenbergen exit. Drive into Diedenbergen, turn left onto Wildsachsener strasse. Pass Heide Sports Park on the right as you leave town, look for Schlossstrasse and turn right. Eatery will be on the right side adjacent to a tennis club.