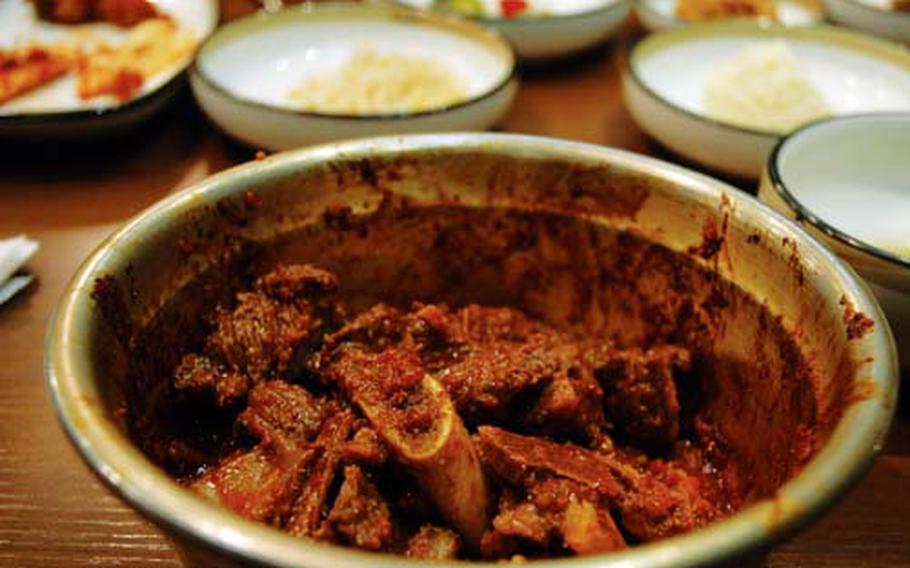 Buy Photo
Kalbi jim is a traditional dish from Daegu that combines steamed beef ribs with a spicy, garlicky sauce. (Photos by Teri Weaver/Stars and Stripes)

But the topography also causes the seasons to get trapped over this city in central South Korea. In the summer, the humidity hangs solid as if held by a lid. In the winter, the cold air nestles directly in your bones.

And like most generations-long recipes, kalbi jim smartly takes small pieces of meat and makes them go far in both quantity and flavor, a must for poorer families trying to feed many mouths, according to Moon Chang-su, owner of San Ho restaurant.

San Ho is in the middle of nearly a dozen kalbi jim restaurants on an alley in Daegu. The area of town is known for its specialty &#8212; merely saying &#8220;kalbi jim&#8221; to the taxi driver will get you exactly where you want to be.

Moon welcomes American customers and even has an English menu, though you won&#8217;t need it. Each person gets an order of kalbi jim for 14,000 won. That comes with an array of kimchee and side dishes; a bowl of rice is 1,000 won extra.

The jim itself looks a bit like messy stew. But once inside a lettuce leaf with a little sesame sauce, some vinegared vegetables and rice, it&#8217;s a real treat.

The friendly service and careful preparation fits with Moon&#8217;s philosophy about food and culture.

Directions: 298-9, Dongin 1-ga, Jung-gu. To get there, get in the cab and say &#8220;Dongindong kalbi jim.&#8221; The taxi will take you to a small street lined with kalbi jim restaurants. San Ho is in the middle, with an electronic sign on the front. San Ho is written on the outside in Hangul.