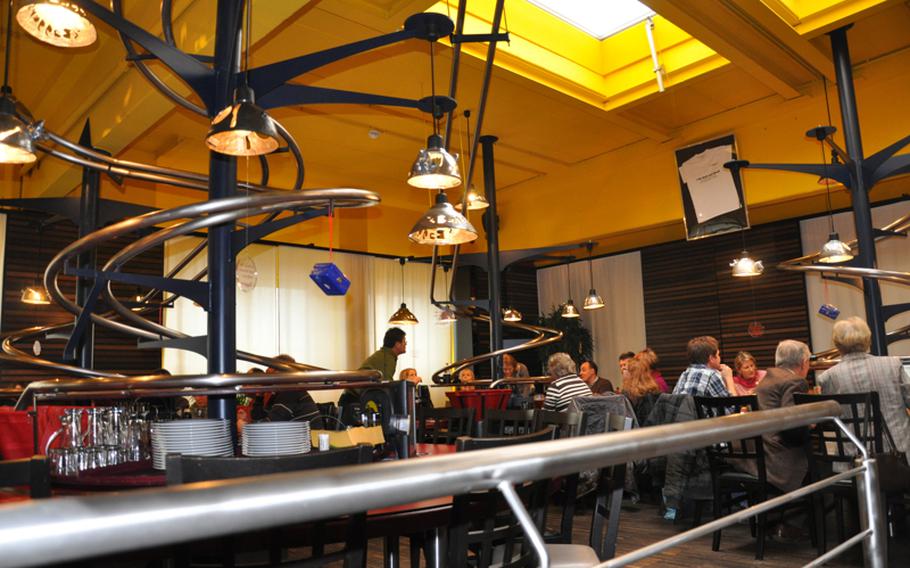 Buy Photo
The roller coaster of rails that food travels on to reach dining tables makes customers feel like they are inside the belly of a machine while eating at the futuristic restaurant `s Baggers near Nuremberg. (Dan Blottenberger/Stars and Stripes)

Buy Photo
The roller coaster of rails that food travels on to reach dining tables makes customers feel like they are inside the belly of a machine while eating at the futuristic restaurant `s Baggers near Nuremberg. (Dan Blottenberger/Stars and Stripes) 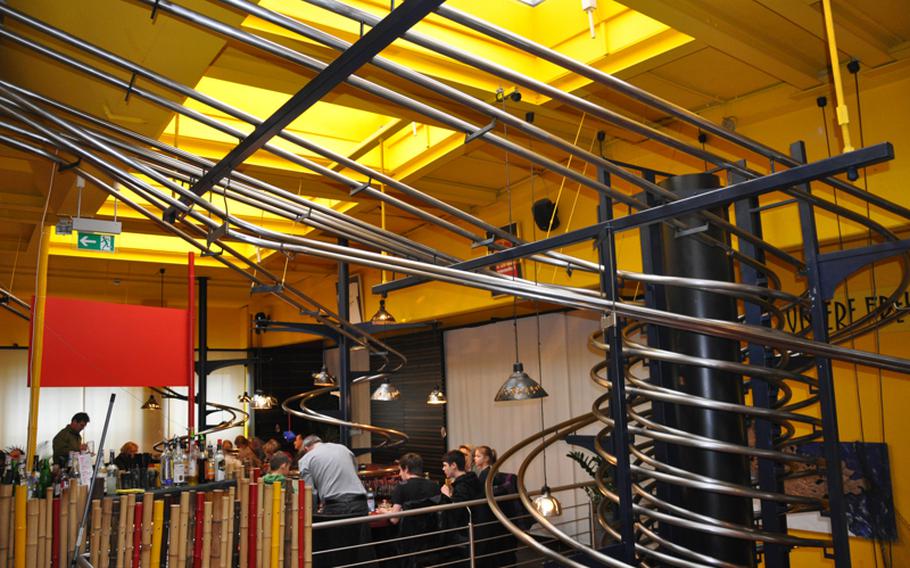 Buy Photo
A roller coaster of rails carries food from the kitchen to individual tables, making customers feel like they are inside the belly of a machine while eating at the futuristic restaurant 's Baggers near Nuremberg. (Dan Blottenberger/Stars and Stripes) 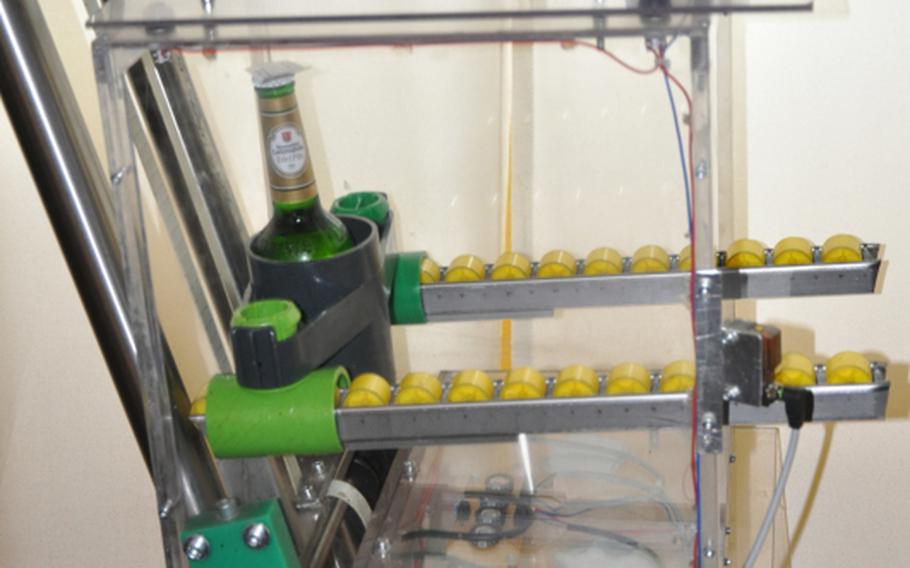 Buy Photo
A beer takes a ride inside a container on one of the many conveyer belts in the 's Baggers restaurant near Nuremberg, Hermany. (Dan Blottenberger/Stars and Stripes) 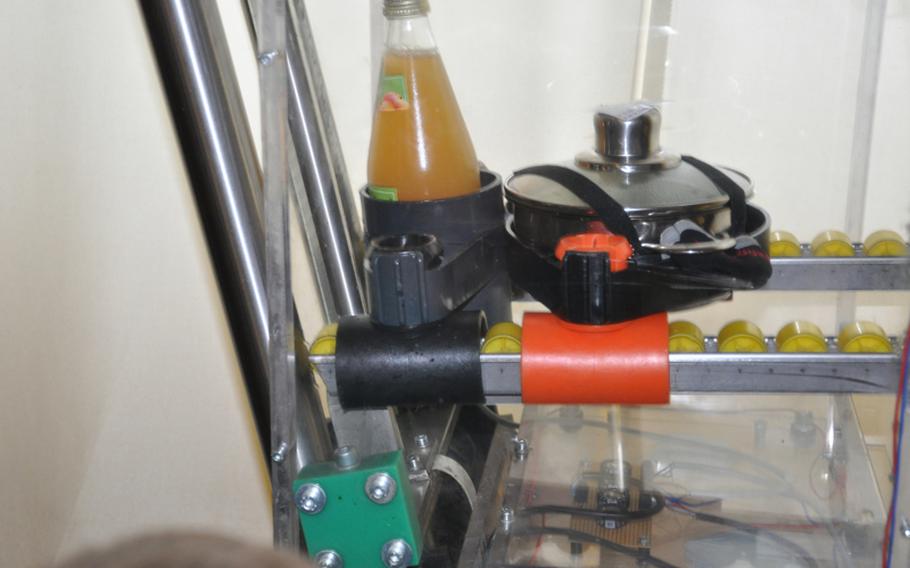 Buy Photo
A beverage takes a ride on one of the many conveyer belts 's Baggers, where food and drink are delivered by rail. (Dan Blottenberger/Stars and Stripes) 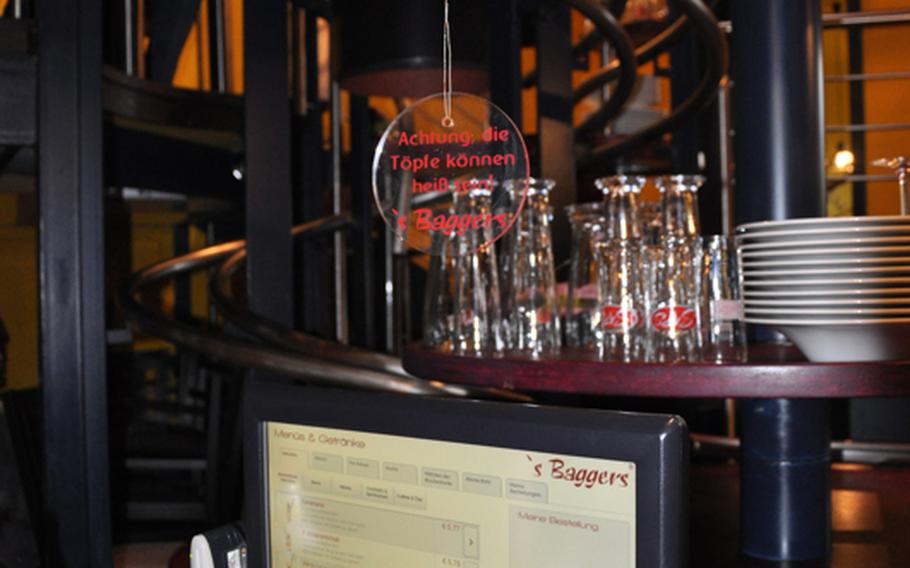 Buy Photo
No waiters or waitresses are needed at 's Baggers near Nuremberg, Germany. All ordering is done on a computer and delivered via a roller coaster of rails and conveyer belts to reach the dining tables. (Dan Blottenberger/Stars and Stripes) 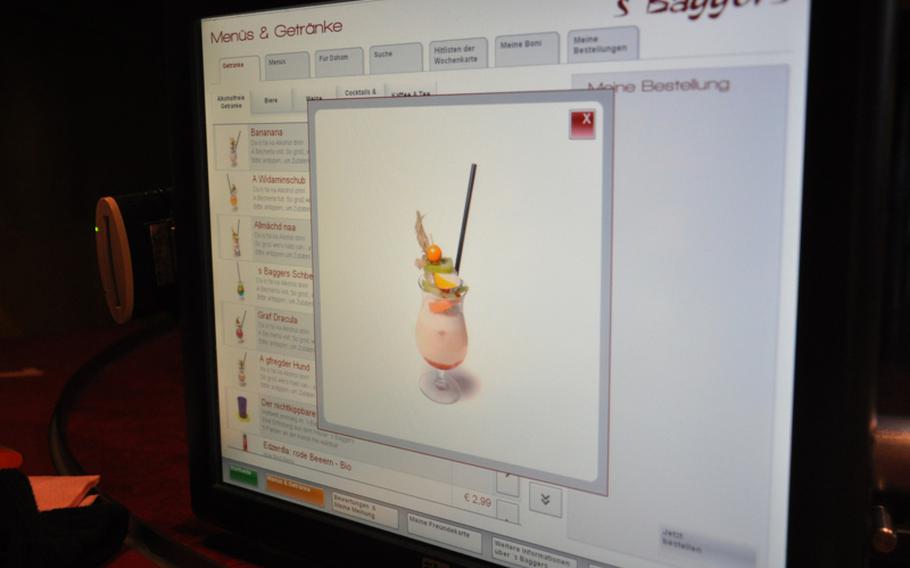 Buy Photo
A fruity beverage is on display via the computer ordering system at a table at the 's Baggers restaurant. (Dan Blottenberger/Stars and Stripes)

Americans are usually wowed by the European train system. Now just imagine that same system as the design for a restaurant. Near Nuremberg, &rsquo;s Baggers is just that, and more.

At &rsquo;s Baggers, patrons can feed their guts and at the same time feel like they are dining in the belly of a futuristic machine.

Customers enter their orders via computer at their table and wait for the restaurant&rsquo;s motherboard to do its magic. Within a few minutes, the food is sent to you on a miniature rail system that runs throughout the restaurant.

Equipped with conveyer belts, the rails are connected to every table with the second-floor kitchen being the main station.

Don&rsquo;t get startled by the clanking of plastic around you as your drinks and meals make their way to your table. The factory setting will have your eyes darting in an attempt to catch the next meal on its way down the track. Items will pass by overhead or down the long spiral columns to the unfortunate customers who have their tables on the less-than-exciting first floor.

The second floor is where the action happens, so if you can manage to reserve seats there, do so. Children will be fascinated at the different routes the food is delivered on. Some dishes are delivered with a sparkler attached, but if you sit on the first floor, the flame is out by the time it reaches you.

When you enter the restaurant, you receive a card that keeps track of all your purchases. Servers stop by only to pick up your empty dishes and assist you if the menu has you bewildered.

The menu is packed with options, all of which are traditional for this part of Germany. I ordered my usual cordon bleu and fries, while my wife and her sister each ordered a stuffed baked potato.

Side dishes are ordered separately &mdash; including Baggers, the local name for Kartoffelpuffer, the potato pancakes that are standards at German festivals.

None of us were overly impressed with the dishes considering the prices. For three adults and two children, the total was about 65 euros.

Unlike most restaurants in Germany, there is a sense of pressure once you take your seat. The clock starts when your reservation begins and remains on the menu screen as you eat. You have precisely 90 minutes to complete your meal. Later in the evenings, dinner reservations are available for up to three hours.

The place is constantly booked, so call ahead or make reservations online. Doing so is easy, as the website has an English version.

The computer menus at the restaurant are strictly in the Bavarian dialect of German, which can be difficult even for locals. I overheard one joking patron ask if the menus were available in German.

Directions: Just off Autobahn 73 in the commercial district of Schmalau near the cities of Nuremberg, F&uuml;rth and Erlangen. Take the F&uuml;rth-Ronhof exit and follow directions available on the website.

Food and drink: A new menu each week with a variety of Franconian-style main courses, including roasts and wursts with potatoes, and generous desserts. There are drinks of all types from coffee to alcoholic beverages.

Prices: A typical meal, not including side orders, costs about 8 euros, while sides average at about 3 euros apiece. Keep in mind, coffee and hot tea are not available via the rail system.

English menu: No, but there is an English menu guide to help with the computer available at the hostess stand. Some of the staff can help you through the process of ordering, but your best bet is to speak German or bring someone who does.

Website:sbaggers.de; an English version is available.