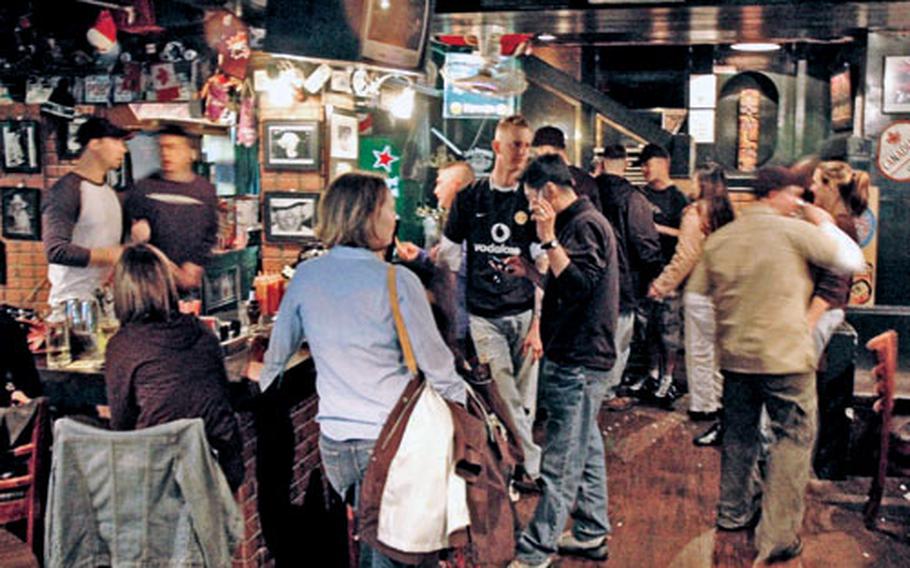 Friday-night patrons at the Rocky Mountain Tavern find plenty to eat, drink and talk about. The second-story Canadian bar is about a block and a half west of the Itaewon subway station in South Korea. (Teri Weaver / S&S)

SEOUL &#8212; A recent Friday night at the Rocky Mountain Tavern in Itaewon left me and my friends asking this question: How would you pronounce poutine?

If your answer leaves you red-faced and giggling, you&#8217;d be wrong.

That&#8217;s in addition to a variety of live music (usually with no cover), a dedicated airing of hockey games (season permitting), and, during the holidays, a special menu of activities for every day in December.

On the Friday night I spent at Rocky Mountain, I followed a plate of Nachos Grande up to the third floor.

Rocky Mountain has other snacks, for much less than $15. Their small menu includes burgers, chicken strips and sandwiches, all served with hand-cut fries.

Which helps explain the poutine, a mix of fries, gravy and cheese that is a Quebec favorite and, though not scientifically proven, has salvaged many a Saturday or Sunday morning in Canada, some northern cities in the U.S., and, for at least the last two years, in Seoul.

Cottin and four of his Canadian friends opened the bar two summers ago, after they all got tired of teaching in South Korea, he said in May. Things are going well, and the same group recently opened Pita Time in Itaewon.

I skipped the poutine and the nachos but stayed late to hear the whole set from alternative country band Chester Story and the Glory Story, which is supposedly the only ex-pat country band in South Korea, or so Cottin&#8217;s been told.

Whether others stayed out of loyalty to the band or the beer, I can&#39;t say. All I know is that with nachos, a banjo and the promise of gravy fries, I felt for the first time in my 18 months in Korea I&#8217;d found a place that felt like home.

Clientele: Mostly ex-pats from Canada, the United Kingdom and U.S. Servicemembers are welcome.

Location: About a block and a half west of the Itaewon subway station. On the second floor, just before the Poly M home furnishing store.