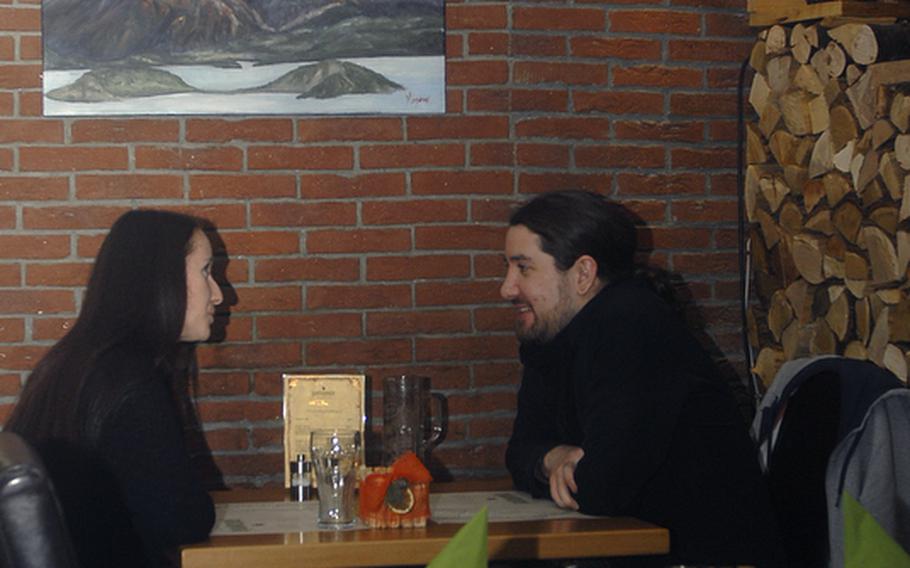 A couple enjoys a romantic night out in early December 2012 at Patagonia Steakhouse in Mainz, Germany. The restaurant, located in the Neustadt section of the city, is known for its steaks and Chilean cuisine. (Kevin Dougherty/Stars and Stripes)

A couple enjoys a romantic night out in early December 2012 at Patagonia Steakhouse in Mainz, Germany. The restaurant, located in the Neustadt section of the city, is known for its steaks and Chilean cuisine. (Kevin Dougherty/Stars and Stripes) 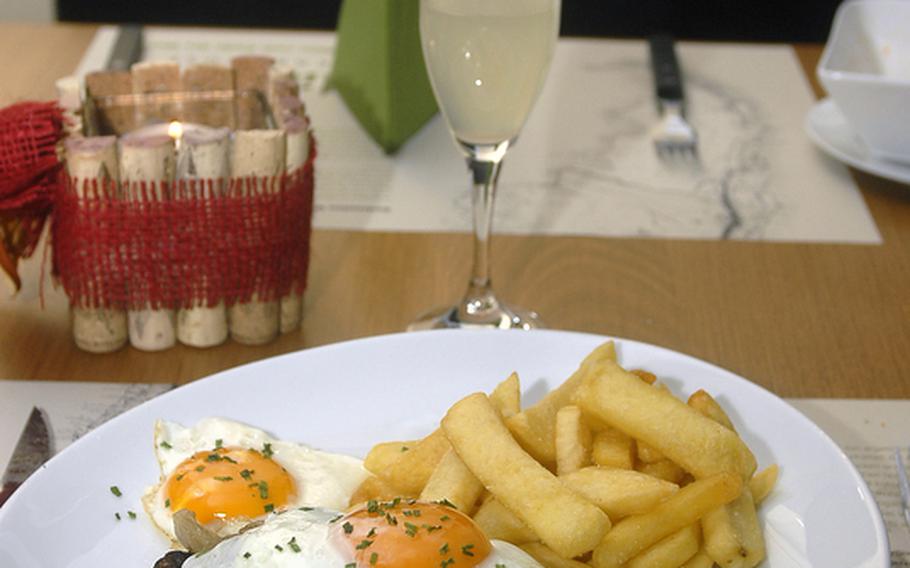 This Chilean steak dish "Lomo (or Bistec) a lo Pobre," which roughly translates to "poor man's steak," is a popular item at Patagonia Steakhouse in Mainz, Germany. The standard dish consists of a steak smothered in fried potatoes, fried onions and lightly fried eggs. (Kevin Dougherty/Stars and Stripes) 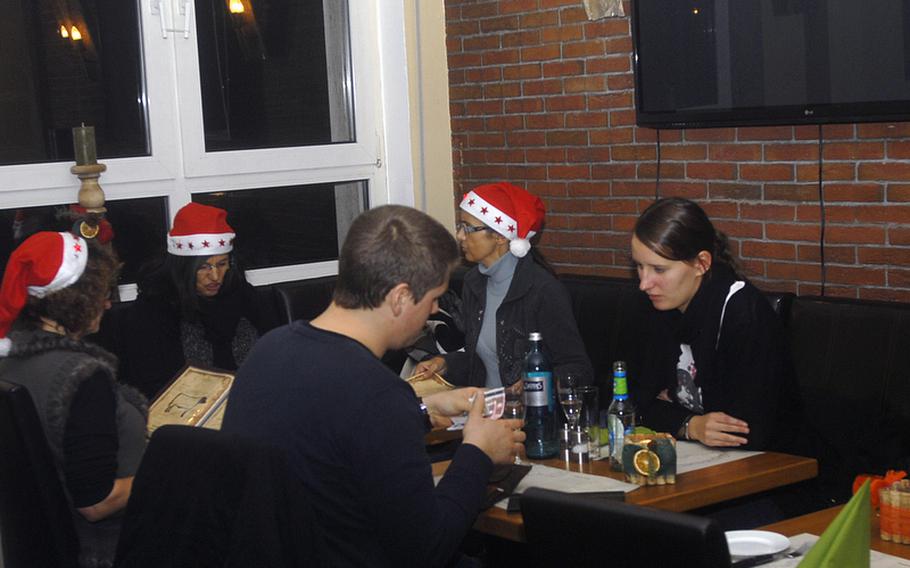 Patagonia Steakhouse in Mainz, Germany, located in the Neustadt section of the city, is known for its steaks and Chilean cuisine. (Kevin Dougherty/Stars and Stripes)

Nothing arouses the American appetite quite like a fine steak. Whether stateside or overseas, the mere mention of that meaty treat can set taste buds aflutter.

Mainz, the capital of the German state of Rhineland Pfalz, is home to at least four steak joints. One of them, Patagonia Steakhouse, features a menu stocked with Chilean dishes and a variety of steaks. The South American nation, which had a significant influx of German immigrants in the 19th and 20th centuries, has a reputation for producing some of the best beef on the planet.

Located about 10 miles from Wiesbaden, the restaurant is co-owned by Fernando Scholtbach and Carmen Lazcano, the head chef. Both moved their families to Mainz a few years ago from Osorno, Chile, widely recognized within that country for its high-quality beef.

Chilean food &ldquo;is not as spicy as Mexican food,&rdquo; Lazcano said one night recently during a break from dinner service, &ldquo;but it is strong in flavor.&rdquo;

All of the beef Patagonia Steakhouse serves is imported from Chile. That includes rib-eye and T-bone cuts, a testament to the high standards meat processors must follow and the natural barriers, particularly the Andes Mountains, that effectively shield Chile from bovine-related diseases, Lazcano noted.

The quality is so good that Chile is the only South American country that has been consistently allowed to export beef to North America, Japan and South Korea, according to Beef Issues Quarterly. It also is the only country from that corner of the world permitted to export beef on the bone to Europe, said Lazcano, adding that hormone additives are banned in her native land.

Whatever the cut, first-time patrons to Patagonia Steakhouse may want to start with the popular Chilean steak dish Lomo (or Bistec) a lo Pobre, which essentially means &ldquo;poor man&rsquo;s steak.&rdquo; The mouthwatering dish consists of a steak smothered in fried potatoes, fried onions and lightly fried eggs.

In Chilean households, Lazcano said, beef is part of at least half of all meals.

&ldquo;On Sundays, it&rsquo;s normal for families to get together and grill,&rdquo; she said.

Chileans usually supplement their meals with items such as potatoes and salad, but side dishes are generally viewed as &ldquo;not so important,&rdquo; said Victoria Scholtbach, the co-owner&rsquo;s daughter. &ldquo;The meat is what is important &mdash; and the wine.&rdquo;

Speaking of wine, all of the steakhouse&rsquo;s red wines &mdash; and half of its white wine offerings &mdash; are imported from Chile. Prices vary, with the average bottle starting at $25 to $30. The most expensive bottle costs nearly $200.

&ldquo;We have only one bottle of that,&rdquo; Victoria Scholtbach sheepishly quipped.

Common to most Chilean dinner tables is the ubiquitous pebre, a chunky salsa used with meat, fish, fritters and chips, for example. An especially tasty appetizer is empanadas, a fried palm-size pastry similar to a calzone. Empanadas are typically filled with minced meat or cheese or prawns and cheese.

Patagonia Steakhouse seats about 40 to 50 people. From May to October, the restaurant sets out its patio furnishings, roughly doubling its seating capacity.

Inside, the d&eacute;cor is simple, warm and understated, with brown-leather chairs, wood tables and hardwood floors. Stacks of white aspen logs ring the front serving counter, lending a rustic air to the place.

&ldquo;The main idea,&rdquo; said chef Lazcano, &ldquo;is to create the feeling of a little cabin in the woods.&rdquo;

Directions: From Autobahn 60, head toward Mainz. The B9 route along the Rhine River is one way in. Getting to B40 in the Neustadt part of the city is the objective. Near the steakhouse, B40 is called Kaiserstrasse. From Kaiserstrasse, take Boppstrasse. The restaurant is at Boppstrasse and Kaiser-Wilhelm-Ring.