After Hours: Lone Star BBQ Smokehouse in Naples: Finger-licking in the land of knife and fork 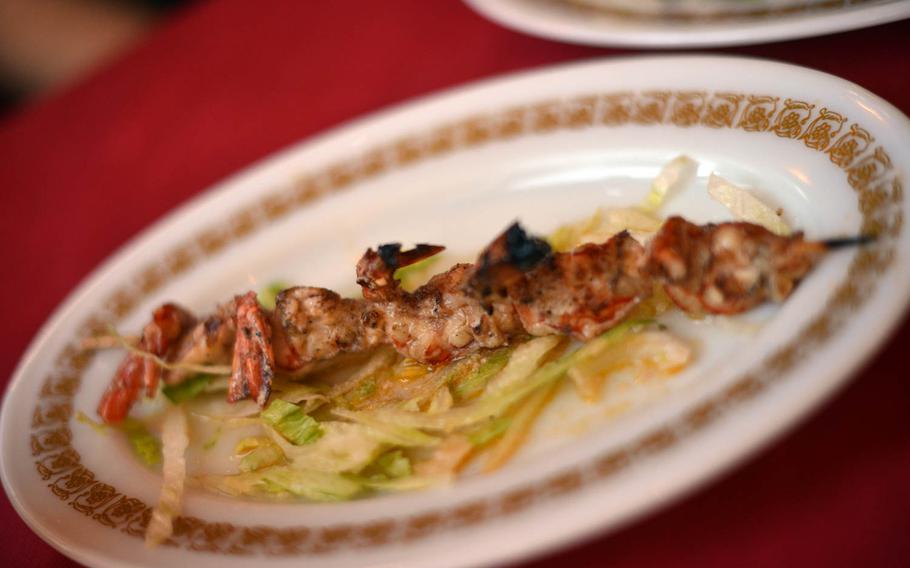 Grilled shrimp on a skewer, an appetizer at Lone Star BBQ Smokehouse, had good taste but a flavor that was difficult to peg. (Steven Beardsley/Stars and Stripes)

Grilled shrimp on a skewer, an appetizer at Lone Star BBQ Smokehouse, had good taste but a flavor that was difficult to peg. (Steven Beardsley/Stars and Stripes) 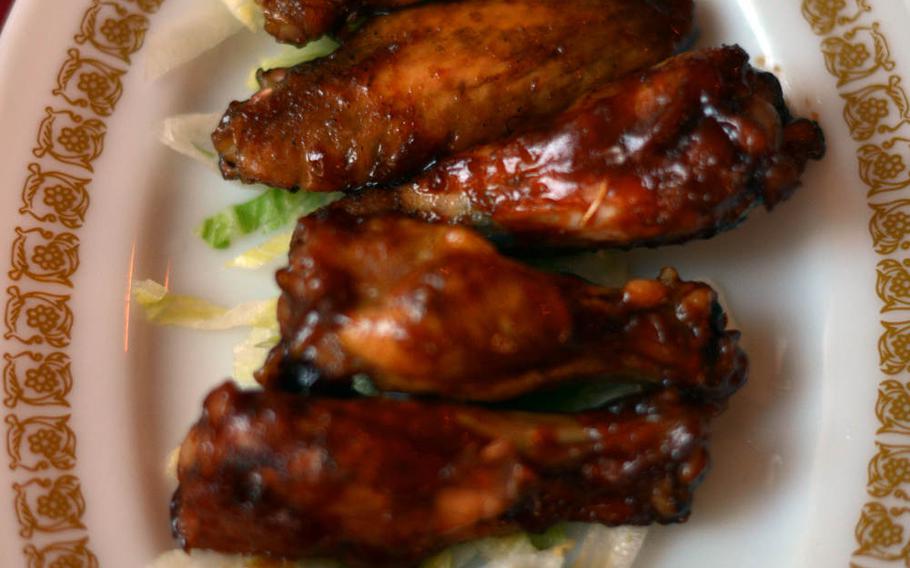 Chicken wings at Lone Star BBQ Smokehouse in Monte di Procida, Italy, near Naples, come in either barbecue or spicy flavors. After its opening three months ago, Lone Star has gained good word of mouth among both Neapolitans and Americans living in the area. (Steven Beardsley/Stars and Stripes) 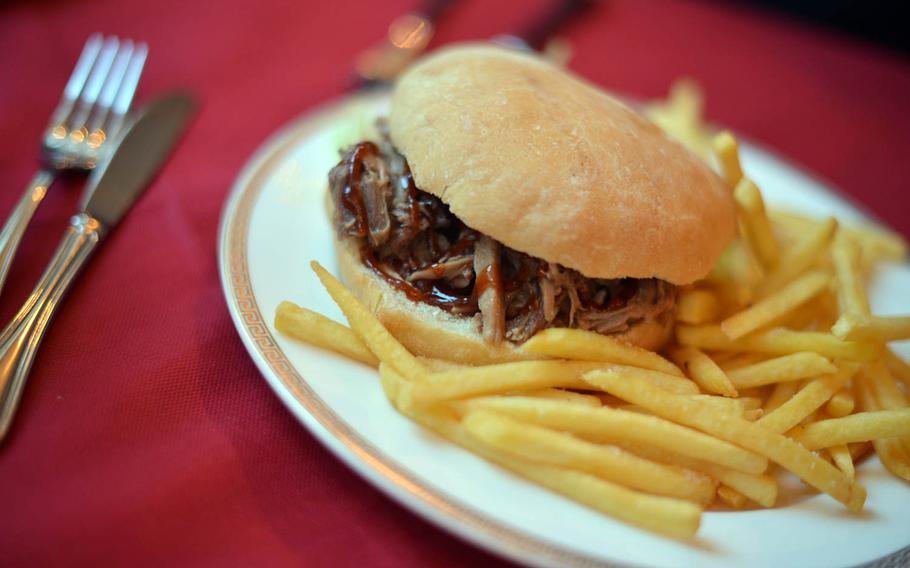 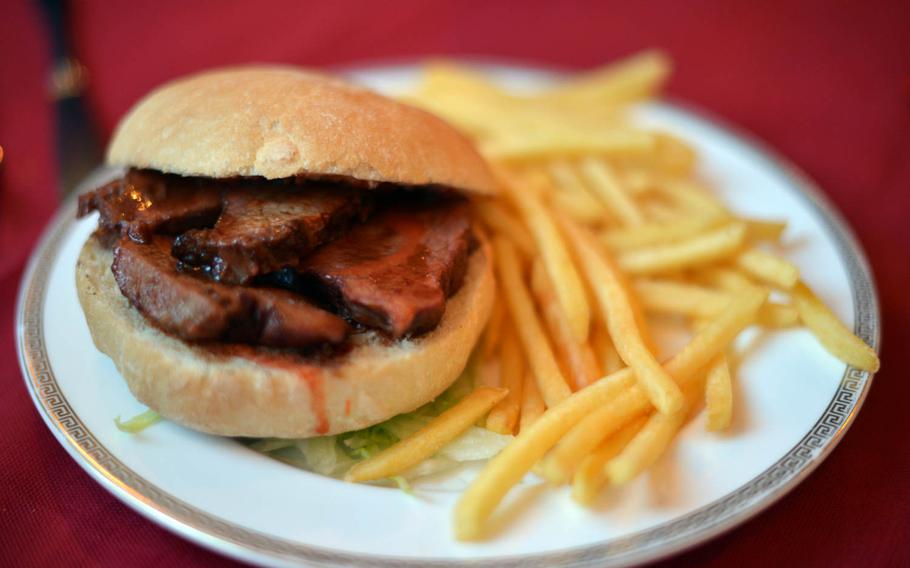 The beef brisket sandwich at Lone Star BBQ Smokehouse in Monte di Procida, Italy, near Naples, is served on a ciabatta roll with shoestring fries. The so-called hot sauce on this sandwich didn’t live up to its billing. (Steven Beardsley/Stars and Stripes) Lone Star BBQ Smokehouse is located in a rather plain building overlooking the Gulf of Naples. Menus are in Italian but easily translatable, and the staff speaks English. (Steven Beardsley/Stars and Stripes) The Lone Star BBQ Smokehouse in Monte di Procida, Italy, might make you feel like you're back home at a barbecue joint. (Steven Beardsley/Stars and Stripes)

Europeans often turn to cutlery for dishes Americans would tuck into with eager hands.

Paris is in the middle of a burger craze, but diners there still expect a knife and fork with their meal. Belgium’s famed fries come with a small skewer to keep hands grease-free. And in Naples, the locals deploy their cutlery with surgical precision when shelling shrimp on their plate.

So we weren’t surprised when the waitress at Lone Star BBQ Smokehouse restaurant in nearby Monte di Procida set down forks and knives before bringing out our two barbecue sandwich platters. It didn’t mean we’d use them.

Lone Star brings a satisfying taste of the States to a region otherwise dominated by pasta, pizza and seafood. Opened three months ago on a terrace overlooking the bay, it is fast gaining word-of-mouth in the American community and among Neapolitans.

Monte di Procida is known for having American-friendly restaurants, a function of the number of U.S. Navy and NATO personnel renting there and the number of local families with restaurants who also own restaurants or businesses in the States.

Lone Star looks like a quick study of the typical American restaurant chain. Booths line the walls, Stetsons hang from hooks and Tejano music plays low from the speakers. The wait staff is attentive and friendly. The owner circulates to talk with diners.

On a recent visit, my wife and I started with the skewered shrimp and barbecue wings (each 5 euros). The former was good but the taste difficult to peg. The latter were done well, with tender meat and a sweet sauce. Our sandwiches met our expectations, with slow cooked pulled pork (5.50 euros) and beef brisket (6 euros) on ciabatta, a bread that improves on many of the plainer rolls served back home. The hot sauce on my beef brisket wasn’t, but the barbecue sauce on my wife’s pulled pork sandwich was sweet and smoky. Shoestring fries came with each platter.

All in all, Lone Star is a good reproduction of a barbecue joint you might know from back home. Close your eyes and block out the Italian conversation nearby and you might picture yourself there again. And if you end up licking your fingers, it might be one of the few places around here where you won’t get a dirty look.

Hours: Open daily except Monday, 7 p.m. to late — in Italy, are closing hours ever official? Open for lunch on Sunday beginning at 12:30 p.m.

Prices: Most starters (antipasti) are between 3 and 5 euros; Entrees (portata principale) are between 5 and 8 euros, although there’s a large steak for 13 euros; sandwiches (panini) run between 5 and 6.50 euros. Accepts cash only.

More information: The staff speaks English. Menus are in Italian but easily translatable. Orders to go available beginning at 7 p.m. and on Sundays beginning at 12:30 p.m. Telephone: (+39) 366-726-0606; email: anthonypscotto@yahoo.com