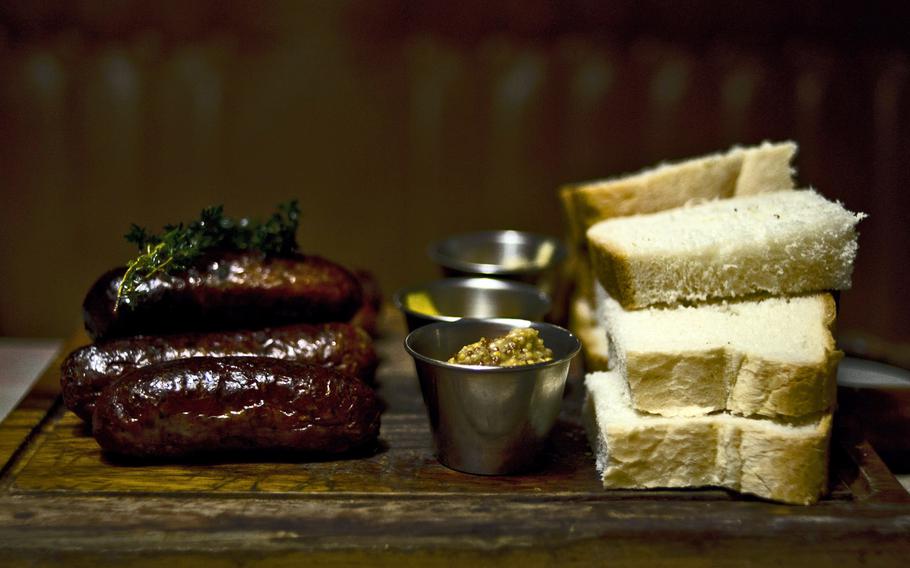 The sausage board at The Cambridge Brew House in Cambridge, England, could be a sharing platter or a meal for a solitary carnivore. It includes various kinds of sausages, three mustards and a pile of white bread, (Adam L. Mathis/Stars and Stripes)

The sausage board at The Cambridge Brew House in Cambridge, England, could be a sharing platter or a meal for a solitary carnivore. It includes various kinds of sausages, three mustards and a pile of white bread, (Adam L. Mathis/Stars and Stripes) 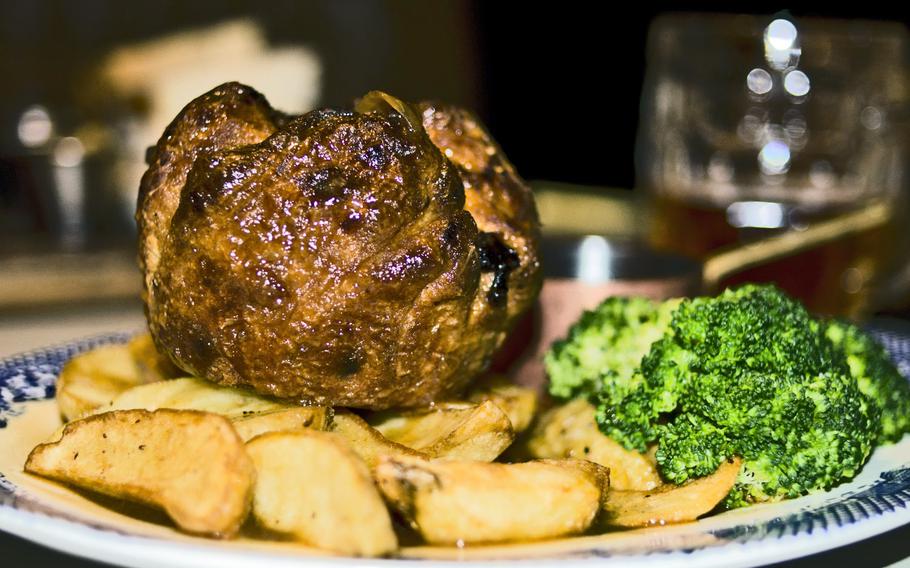 Lamb-and-apricot pie on a bed of chips sits in a lake of gravy at The Cambridge Brew House. The fare is simple but filling. (Adam L. Mathis/Stars and Stripes) 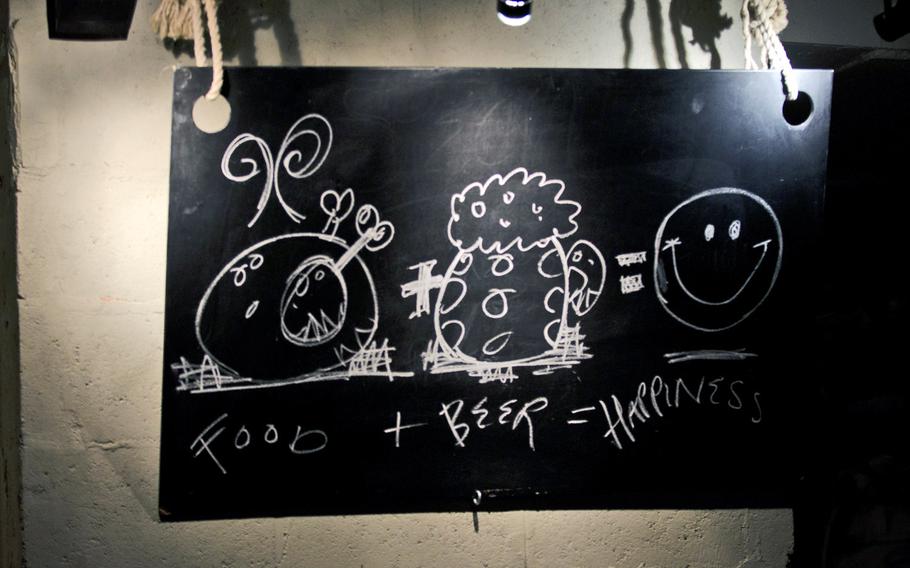 The Cambridge Brew House's motto is prominently displayed in its dining area. Located at the corner of King and Malcolm streets, the restaurant boasts a great location in Cambridge, England. (Adam L. Mathis/Stars and Stripes)

A relative newcomer to the restaurant scene, The Cambridge Brew House in Cambridge wants to entice customers through the door with in-house cured meats and brewed beer.

While these are its selling points, it’s hard to say how well this will work, since its beer and meat are about average.

First, the beer. As its name suggests, the brew house makes its own beer on site. (The brewery is visible through glass panels in the restaurant.) When my wife and I visited, there were several beers on tap, but only three of the Brew House’s own: King’s Parade, Misty River and Night Porter, all listed on the brewery website as its regulars.

I visited the brew house, briefly, in November and was unimpressed by the Night Porter, as it was too thin (though some might like that in a porter). During this latest visit, I opted for the Misty River, a respectable, light, citrusy English ale, but hardly distinguishable from numerous iterations of similar beers found in grocery stores or other pubs.

The Brew House’s other selling point, touted on its menu, is in-house curing of meat, fish and cheese. I ordered the pie of the day: lamb and apricot on a bed of chips (fries) in a lake of gravy. The word “pie” is misleading to Americans, as what you get is a giant pastry puff filled with gravy-soaked lamb. It was delicious, but simple; lacking in complexity but extremely satisfying in a lots-o’-meat-and-carbs way.

My wife opted for an even meatier approach: the sausage platter. The platter could be shared with a group or taken as an entree if you are looking for a glut of local sausages accompanied by three kinds of mustard and white bread. Like the lamb pie, this was nothing that we found extremely special, but it was very satisfying.

The most distinct aspect of the brew house is its decor. With its seemingly random selection of decorations and furniture, the place made me think of West Coast eclectic. Country dining-room chairs sat near metal-framed chairs that could have been used in an auditorium. The lounge area has couches for informal dining, while the more proper dining area has a wall primarily dedicated to a display of animal horns.

Recommending this place is easy; I would certainly go back, but it’s not necessarily worth going out of your way for if you have a good pub in your neighborhood.

Perhaps The Cambridge Brew House’s biggest selling point is its location. On the corner of King and Malcolm streets, it is a short distance from the heart of Cambridge and thus an easy pit stop to fuel a shopping day out.

Hours: 9 a.m. to 11:30 p.m. Sunday to Thursday and until midnight Friday and Saturday. Food, however, is served only from noon until 9:30 p.m. Monday through Saturday. Sunday roast is available from noon until 9 p.m. Breakfast is offered from 10-11:30 a.m. Saturday and Sunday. Coffee and tea are available all day.