After Hours: Lissabon in Kaiserslautern, Germany, draws crowds with its seafood 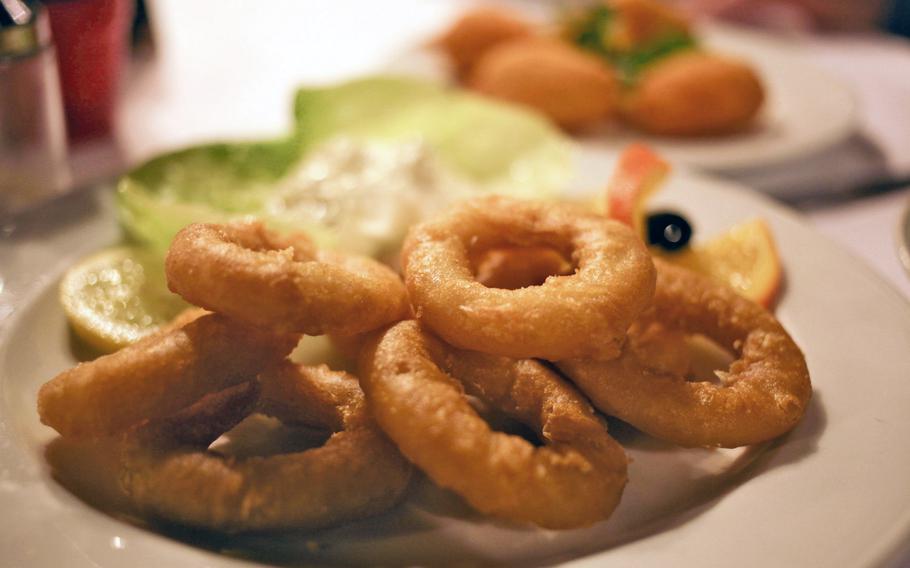 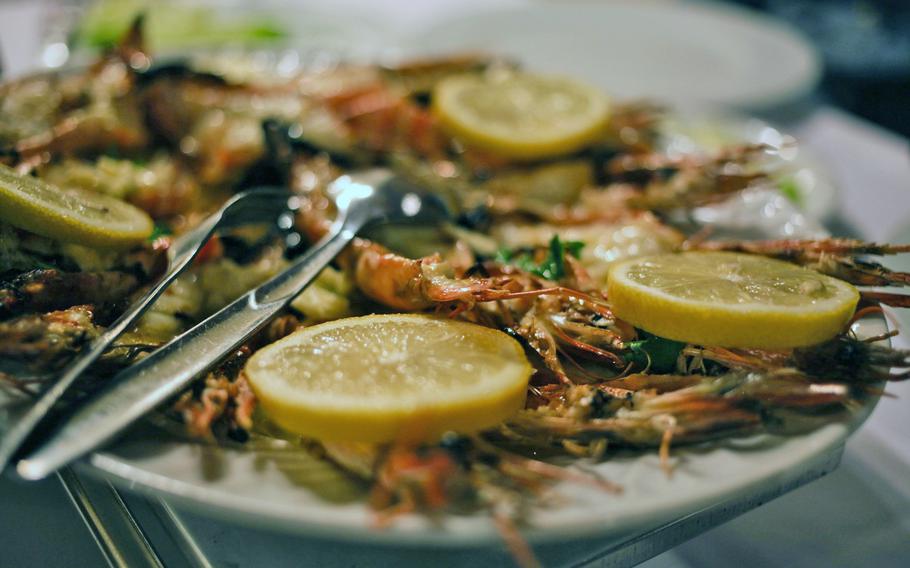 Buy Photo
Grilled shrimp are a house specialty among the Portuguese offerings at Lissabon in Kaiserslautern. (Matt Millham/Stars and Stripes) 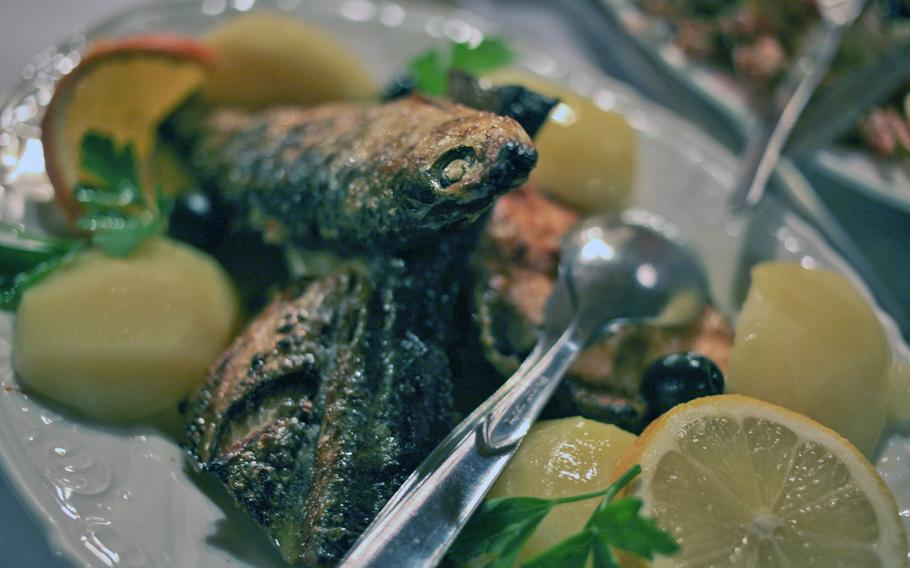 Buy Photo
The mixed grilled fish platter with salt potatoes swim in a shallow pool of butter at Lissabon, which specializes in seafood. (Matt Millham/Stars and Stripes) 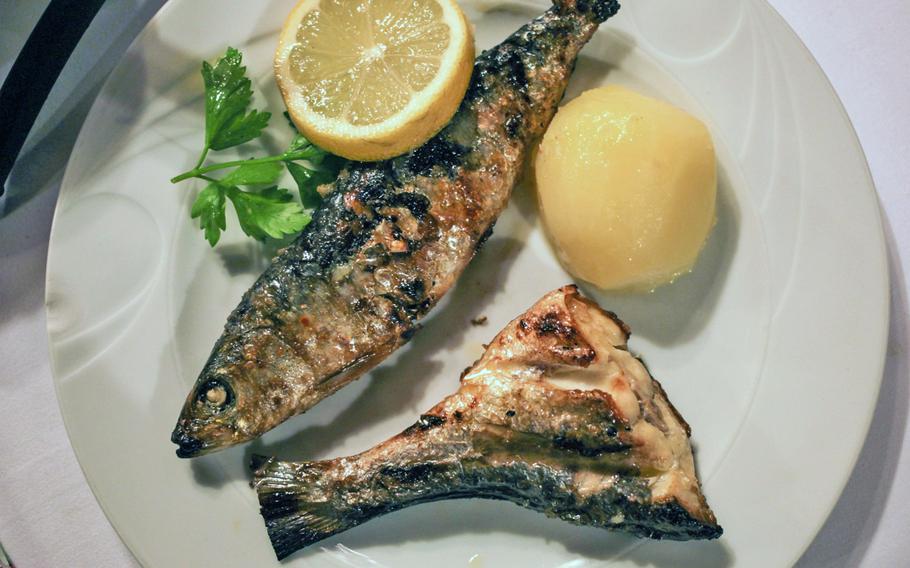 Buy Photo
The grilled fish at Lissabon is fresh and cooked to perfection. (Matt Millham/Stars and Stripes) 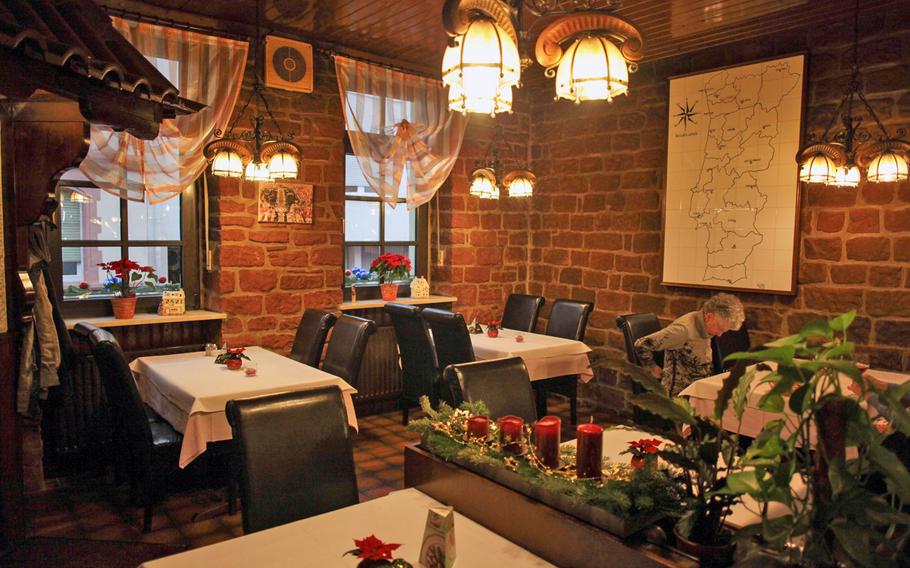 Buy Photo
The interior of Lissabon, a Portuguese restaurant in Kaiserslautern, Germany, is warm and inviting. (Matt Millham/Stars and Stripes)

Though I’m kind of an adventurous eater, I don’t spend a lot of time wondering what people in other parts of the world eat. If I ever wind up in some foreign land, I reckon I’ll figure it out when I get there.

Kaiserslautern, Germany, a city whose biggest selling point is the ease with which it can be escaped, sometimes feels as if it’s afflicted with the same lack of imagination. One of the most far-out items on many local menus is saumagen, a regional specialty of pork, potatoes and carrots stuffed into a pig’s stomach and boiled, then sliced, fried and served, usually next to some other kind of potato. An outsider might consider it a bold choice, but for locals, it’s as timid as a Big Mac is to Americans.

Here, it’s easy to get into a food rut, to join the ranks of those queuing for schnitzels and döner kebabs and food court Taco Bell and forget that there’s something else out there for dinner.

Fortunately, the city has something to expand our culinary horizons: Lissabon.

The joint, tucked back on a dingy one-way backstreet outside the heart of Kaiserslautern, isn’t a place one is likely to just stumble upon. Yet even on a Tuesday, it’s hard to get a table here without a reservation.

This is likely the result of Lissabon’s carefully prepared seafood, which has a way of turning casual diners into repeat customers. Among the restaurant’s specialties is grilled shrimp, a plate of six large, split crustaceans bathed in butter; and paella, which you have to order in advance.

Other offerings might not be for everybody. Some of the animals served come looking not much different in death as they did in life. The big sardine served with my grilled fish platter, for example, still had its head and tail attached. This is one of the features I love, but it tends to freak some people out.

The one shortfall is Lissabon’s appetizers. The calamari is the ring type, kind of greasy and lacking in freshness. The crab balls, while tasty, also lack the out-of-the-sea taste of the restaurant’s main courses.

But don’t let that deter you from eating here. If fish isn’t your fancy, you’ll be head over heels for the flan.

Directions: From the A6 autobahn, take the Kaiserslautern Centrum exit, which leads to Mainzer Strasse. In about three-quarters of a mile, take a left onto Mannheimer Strasse. Wormser Strasse is the second road on the left and is one way.