After Hours: Il Tucano in Naples beach of Baia, Italy 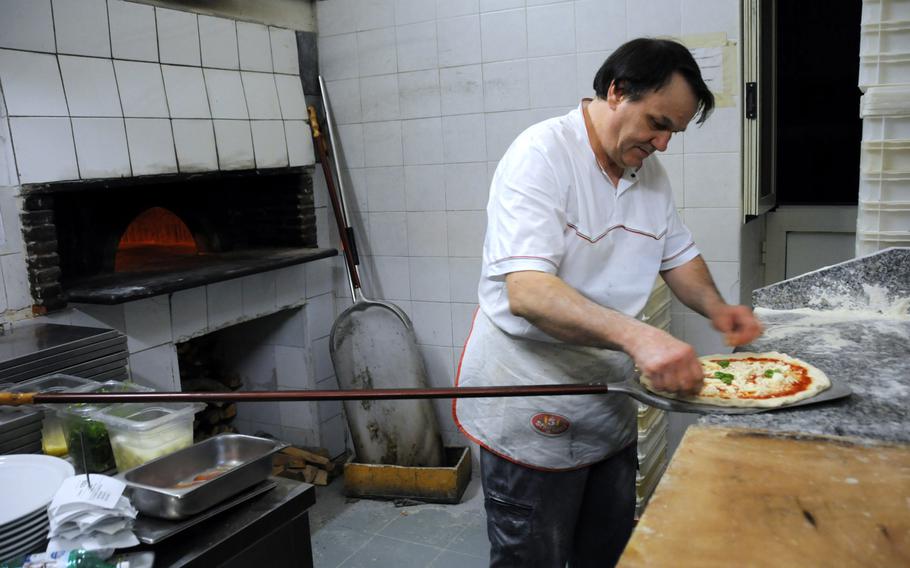 Passion is what drives Aldo De Prisco, a "pizzaiolo" for more than 40 years. There's just something artistic about making the perfect pizza, he said. (Sandra Jontz/Stars and Stripes)

Passion is what drives Aldo De Prisco, a "pizzaiolo" for more than 40 years. There's just something artistic about making the perfect pizza, he said. (Sandra Jontz/Stars and Stripes) 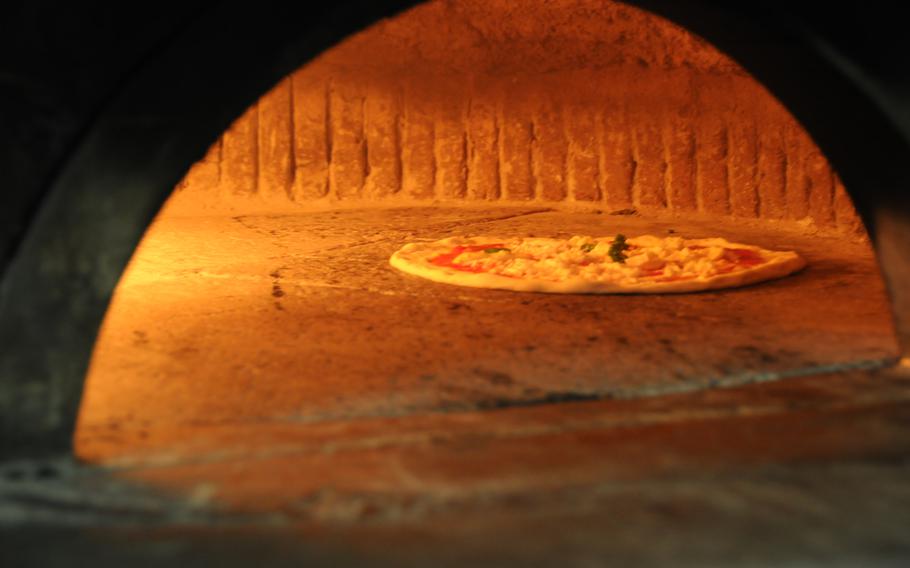 To be a true Neapolitan pizza, the flat, doughy pie, usually topped with just a few toppings, cooks for just a minute or two in a brick oven at 485 degrees Celsius. In Fahrenheit -- that's hot (over 900 degrees). (Sandra Jontz/Stars and Stripes) 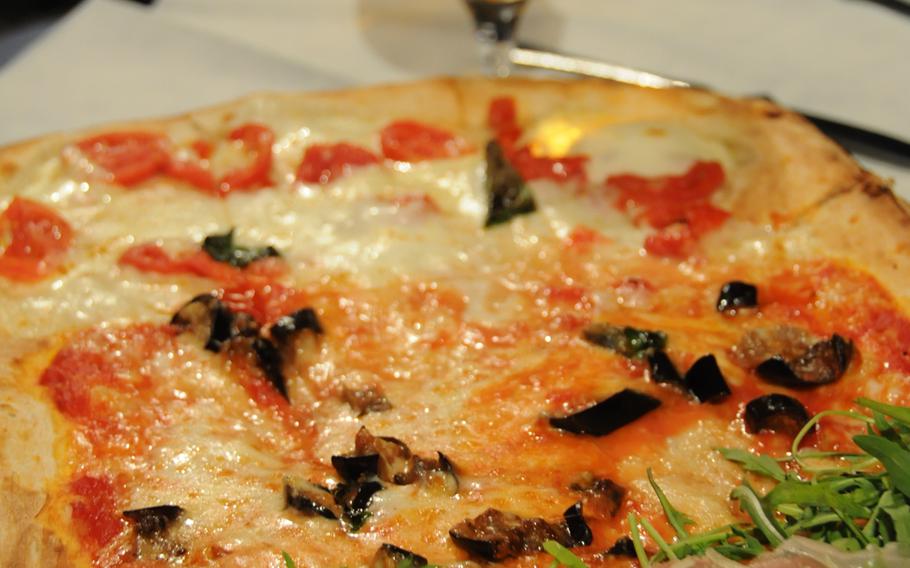 Pizza by the meter is the specialty of Il Tucano restaurant and pizzeria in the beach town of Baia, a suburb of Naples. Pictured here, a half-meter, three-flavored pizza -- perfect for splitting between two diners. (Sandra Jontz/Stars and Stripes) "Voila!" (OK, we know that's French). After just a few minutes in a piping-hot, wood-fueled brick oven, out comes a scrumptious Pizza Margherita -- perhaps the most popular and topped only with mozzarella cheese, tomato sauce and fresh basil. (Sandra Jontz/Stars and Stripes) 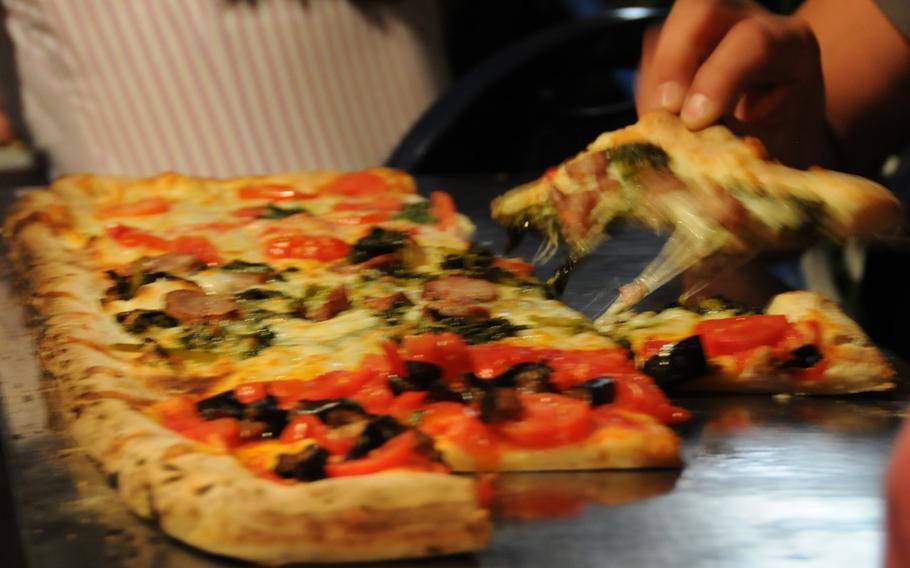 A diner at Il Tucano restaurant and pizzeria in the Naples suburb of Baia snags a piece of vegetable-topped pizza. Restaurant owner Salvatore De Stefano says pizza makers, or "pizzaioli," have a secret behind their delicious dough -- less yeast used and more time to let the dough rise. But he declined to provide further details. (Sandra Jontz/Stars and Stripes) 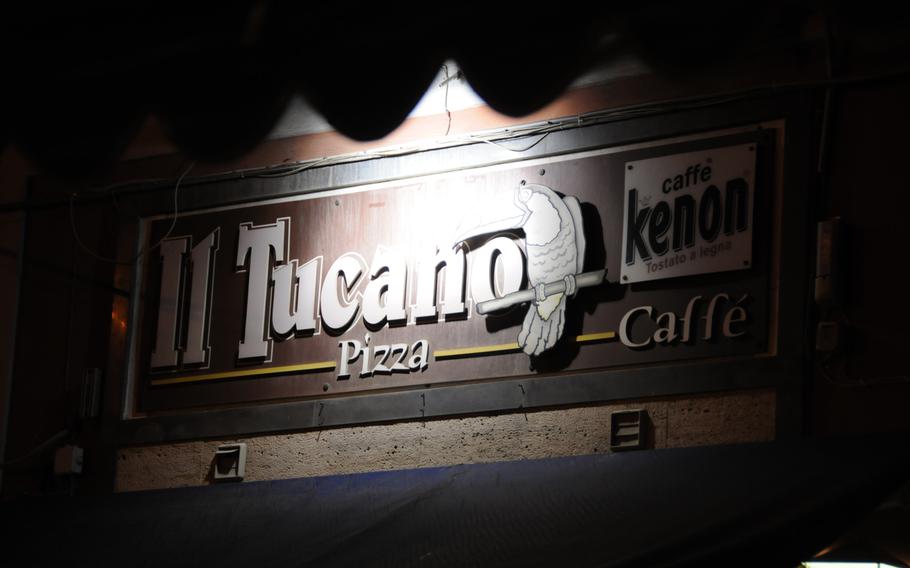 Il Tucano Pizzeria offers pizza by the meter in the Naples suburb of Baia. (Sandra Jontz/Stars and Stripes)

It might seem a bit pointless to write about a restaurant in southern Italy that serves pizza as its specialty. Pizzerias are everywhere. Not bumping into one, hearing of one or haven eaten at one would be like going through an Italian grandmother’s day without hearing her lament “O mamma mia!”

And yet, Il Tucano restaurant and pizzeria in the port of Naples’ beach suburb of Baia is worth a little attention.

Pizza is its specialty — both individual pies as well as pizza sold by the meter (more than 3 feet long), a method while not unique is not widely popular, either. And patrons can order it by the half-meter, three-quarters or a full meter. A half-meter pizza is plenty for two.

Restaurant owner Salvatore De Stefano says the pizza makers, or “pizzaioli,” have a little secret behind their dough that makes it lighter, fluffier, delicious and, above all, easier to digest.

“It doesn’t sit heavily in your stomach after a night out eating,” De Stefano said. The dough uses less yeast than usual and is allowed longer to rise — but further details on exact amounts will remain a Tucano secret, he said.

In April, for the first time, the Tucano pizzaioli entered their first national pizza competition in Parma and placed ninth out of 60 competitors in their category, he proudly boasted.

The port-front locale, which faces the water and the yachts and sailboats that sit in Baia’s harbor, has existed since 1914, only back then it was a store that sold oil and wines, he said. In 1993, he and his partners bought the location, driven by an ambition to open a restaurant. But there were already so many eateries, they had to come up with a gimmick. While the restaurant fared well, seven years later, in 2000, they expanded to include the pizzeria. And Baia-area’s pizza-by-the-meter came into existence.

In his search of a name for the locale, De Stefano said he wanted something that strayed from the Neapolitan tradition of featuring the family name. He needed something catchy, something that rolled off the tongue, he explained. He liked Il Tucano — the Toucan.

“I loved the colors. I liked the bird. It was unique, intriguing … and easy to remember.”

The pizzeria carries the Vera Pizza Napoletana logo, a badge of honor bestowed by the Associazione Verace Pizza Napoletana, which sets guidelines and performs spot-checks on restaurants selling their pizzas as true Neapolitan pies. The pizzas must be made from a base of risen dough and cooked in a wood-fed brick oven.

The pizzas live up to their reputation for being delicious — the sauce is just sweet enough, the dough soft. The toppings are fresh and cooked to perfection in the brick oven that rages at 485 degrees Celsius (more than 900 degrees Fahrenheit).

The service might leave a little to be desired, especially for patrons who are used to rapid and constant attention while dining.

So go hungry, but go patient.

Food: While pizza is the most popular item, Il Tucano is a full restaurant serving pasta, meat and especially fish dishes, often fish bought that same day from fishermen in the port of Baia. Pizza-by-the-meter prices range from 15 euros for a half-meter to 27.50. Individual pizzas range from 3 euros to 6 euros.

English language menu: No, but some of the servers speak a little English.