After Hours: Hitting the town in Fussa? Stop by Media Town first 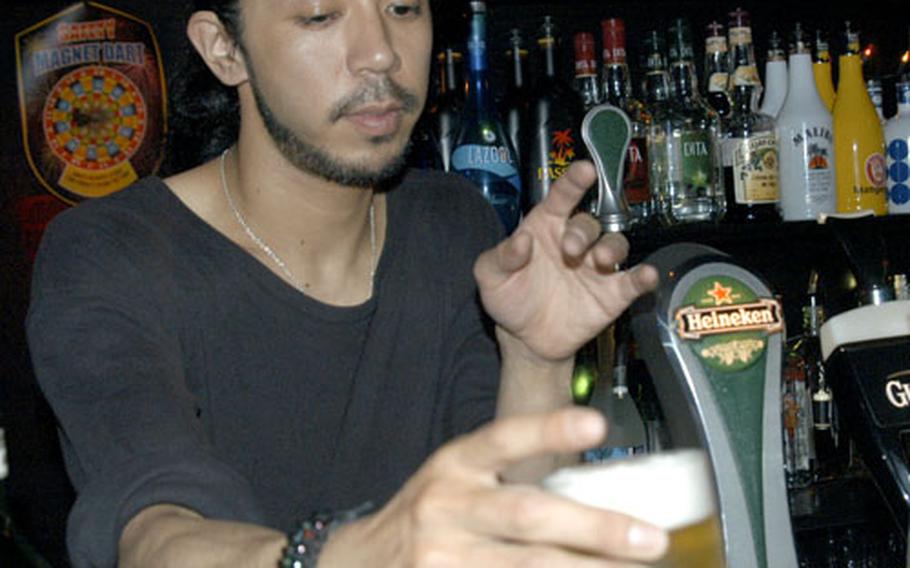 FUSSA, Japan - Four nights a week you can stop by Media Town and have your fortune read. Luckily, a cocktail won&#39;t cost you one.

The bar is a bit cramped, with only eight stools inside, but the place also features a yakitori booth on the street that serves up food and drinks - almost all of which is 500 yen or less. Within walking distance of Yokota Air Base and not far from the Fussa train station, it&#39;s a great launching point for a night outside the gates.

As long as your night will end early, that is - the bar is within Yokota&#39;s nightly 1-6 a.m., three-block restriction area for nearby "Bar Row."

Despite its small size, there&#39;s some buzz surrounding Media Town. The pub has connections with a handful of nightclubs in the area and offers special deals on cover charges and hosts several special events throughout the year. More than 130 people turned out last New Year&#39;s Eve for a countdown celebration that overflowed into the streets.

It&#39;s called Media Town because a Japanese Internet TV and radio station broadcasts from upstairs. But ironically, it didn&#39;t go on the air until two-and-a-half years after the bar opened in 2001.

"I&#39;ve been coming here about four years. There was no Fussa TV then, just yakitori and the bar," said Ed Baldos, who works for a base contractor at Yokota and chimed in with some translation relief during my recent visit. "It may take a while for them to get to know you, but everybody&#39;s all friendly in here. This is actually where my Japanese language skills grew."

FM Fussa 88.0, the on-premises radio station, is occasionally piped into the bar. On most nights, however, Naoyuki Ohba, one of Media Town&#39;s bartenders, pumps out a lively mix of music from his CD stash. Might be hip-hop, jazz, pop, easy listening, disco, a rock tune - it just depends on his mood.

For 2,000 yen a year, you can pick up a bar membership that gives you discounts on Media Town&#39;s special events and mobile phone alerts - presumably in Japanese.

Given my relative deficiency in Japanese, I&#39;ll just have to settle for a draft of Guinness or Heineken at 500 yen a mug. Such sacrifice.

As always, if you drink, do so responsibly. Don&#39;t drink and drive.

Rating: Five beers out of a six-pack.

Food: Yakitori, salads, noodle dishes and rice included on menu, which is in Japanese but has pictures. Most items 500 yen &#8212; less if purchased from the yakitori booth on the street.

Clientele: Lots of locals with a few patrons from nearby Yokota Air Base.

Location: Go out Fussa Gate and take a right. At the first traffic light, go left. Continue downhill past the pachinko parlor on the right and &#8220;Bar Row&#8221; on your left. Media Town is about 50 yards farther on the right, not far from Fussa train station.