After Hours: Hit the chicken motherload at Bamboo Cafe 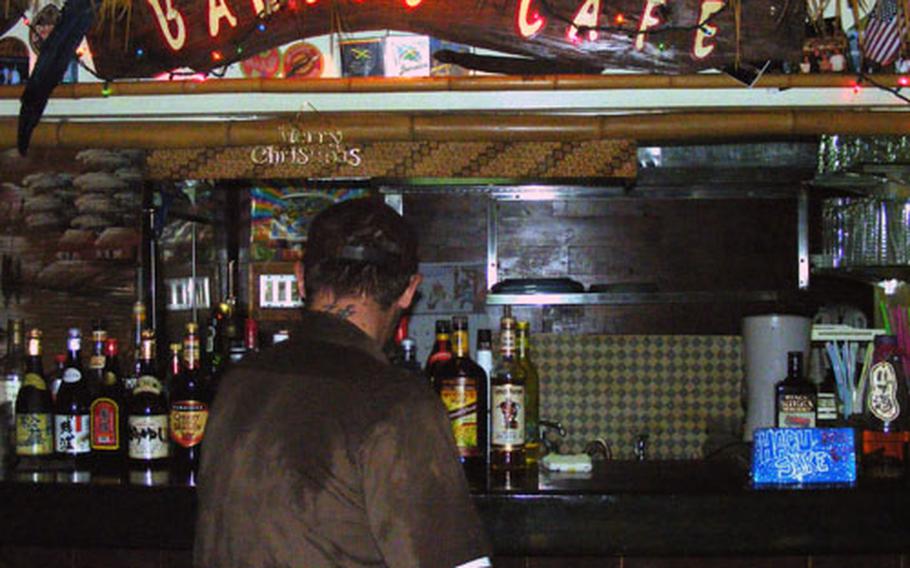 The Bamboo Cafe is located on Park Avenue in Okinawa City. Try the Jamaican jerk chicken wings -- but be sure to have a cold drink handy to put out the fire. (David Allen / S&S)

Well, at the Bamboo Cafe I finally found it. Chicken so good, so tasty, so damn spicy that the bland wings at KFC and Popeyes will never taste the same.

We hit the motherlode. For appetizers we ordered a plate of Jamaican jerk chicken, mozzarella spring rolls and a mugs of locally brewed Orion draft beer.

&#8220;Man, that&#8217;s great,&#8221; one of my guests said the instant he bit into a spring roll. But the overpowering fragrance of the Jamaican jerk chicken demanded my attention. I grabbed a wing and bit in.

The unbelievably delicious wing was cooked in a fiery sauce that lingered on the back of my tongue, demanding a healthy swig of my ice-cold beer to put out the fire. I made sure to dip the next wing in the accompanying cup of ranch dressing to cool my palate. The main course was a sweet bowl of coconut soup and more Jamaican jerk chicken with rice and coleslaw.

The owner of the Bamboo Cafe, Takae Yokoyama, stopped by.

Clientele: Mix of Okinawans and Americans.

Location: On Park Avenue a block or so from Highway 330 and a few streets north of gate Two Street.