After Hours: Go ahead, eat with your hands 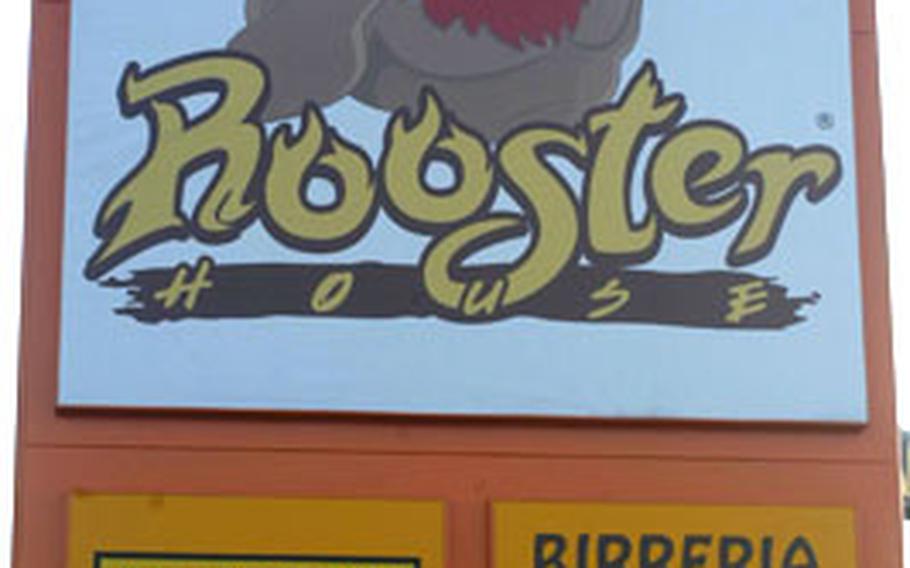 Those hoping to snag some chicken at the Rooster House shouldn’t be afraid to get their hands a bit messy. The restaurant is located near the Piramidi mall in Vicenza, Italy. (Kent Harris / S&S)

Those hoping to snag some chicken at the Rooster House shouldn’t be afraid to get their hands a bit messy. The restaurant is located near the Piramidi mall in Vicenza, Italy. (Kent Harris / S&S) Grab a few handfuls of peanuts while you’re waiting for your meal at the Rooster House Restaurant. The restaurant specializes in chicken and beer, but peanuts are free. (Kent Harris / S&S)

VICENZA, Italy &#8212; One way to spot American diners in European restaurants is their use of silverware. Europeans eat with a utensil in each hand most of the time, while their American counterparts often favor just a fork or spoon in one hand.

Throw all that out at Rooster House, a restaurant where all diners are encouraged to eat with both hands &#8212; and no utensils.

&#8220;The chicken has a different flavor when you eat with the hands than with the silverware,&#8221; said Enrico Frigiola, who opened the restaurant about six months ago.

Frigiola jokes that customers can ask for (plastic) silverware the first time they visit. After that, they&#8217;ll have to use their fingers.

As the name implies, Rooster House is all about chicken. The two main options feature flame-grilled chicken with a choice of either French fries or vegetables. There&#8217;s also more than a dozen kinds of pizzas &#8212; with the no-hands policy definitely favoring Americans in this instance.

Frigiola says chicken orders outnumber the pizza requests on Saturdays &#8212; when reservations are strongly recommended &#8212; by about a 5-1 ratio.

The restaurant also has a handful of appetizers available ... all finger foods, of course.

Taking the hands-on thing even further, there&#8217;s a barrel of peanuts near the entrance. Customers can grab a few handfuls (for free) and take them back to their tables. On Saturdays when it&#8217;s busy, customers are encouraged to brush the shells off onto the floor.

Red, blonde and white beer &#8212; hailing from places such as Denmark and Australia &#8212; are on tap. Make sure you have a designated driver if you decide to opt for the three-liter pitcher. This being Italy, customers can also opt for a bottle of wine, though it&#8217;s not on the menu.

The restaurant&#8217;s atmosphere might lead one to believe that it&#8217;s part of an upscale chain of sorts, but Frigiola said that&#8217;s not the case. At least not yet. He said he&#8217;s fielded inquiries from as far away as Spain, but has no definitive plan to expand at this point.

Clientele: Mostly Italian, with some Americans.

English menu: Yes. It&#8217;s all on a place mat. Most of the servers speak some English as well.