After Hours: Get your Sasebo burger fix at Uncle Sum 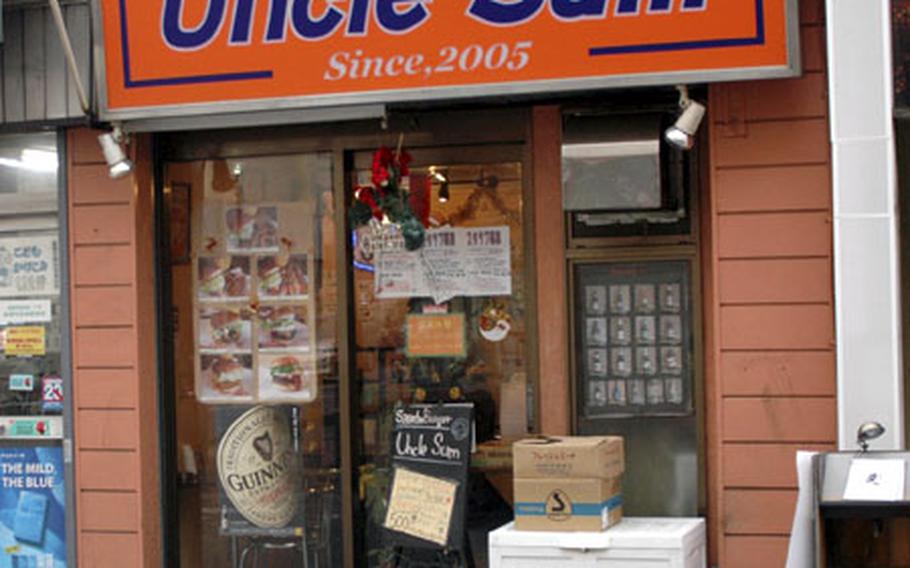 Whether Uncle Sum is named after the gray-whiskered, patriotically dressed man we know as Uncle Sam is unclear. But here&#8217;s a strong hint: A large &#8220;I want you for the U.S. Army&#8221; poster greets you at the door.

A tiny little burger joint located on the corner across from the Sobudai-Mae train station, Uncle Sum seats maybe 20 people at most within its Americana-decorated walls.

The menu focuses on hamburgers, specifically Sasebo burgers &#8212; a Japanese-style burger named for the city where they were created. Known for being handmade with fresh ingredients, and sometimes topped with a fried egg, these burgers have become popular throughout Japan.

The burgers at Uncle Sum taste great, and contrary to its welcome mat, which advertises &#8220;Slow Food,&#8221; they are ready pretty quickly. There are about a dozen or so burger varieties on the menu, from a regular hamburger to a few more exotic, egg-topped choices. It&#8217;s a pretty no-frills menu, so if you are not in the mood for a burger or maybe some onion rings, you might want to eat elsewhere.

The restaurant, which also does takeout, is open from 10 a.m. until 1 a.m. every day except Sunday, when it closes at 10 p.m.

Whatever the hour, Uncle Sum is a great place within walking distance from Camp Zama. Cheap, high-quality food, a decent selection of beer in a cozy, comfortable environment makes Uncle Sum a place worth checking out.

English menu: Yes, although there is only one copy up at the counter.

Clientele: Anyone, everyone (again, burger joint).

Location: Head straight out Gate Four (the walking gate) at Camp Zama towards the Sobudai-Mae train station. Uncle Sum is on the right hand corner across from the station.