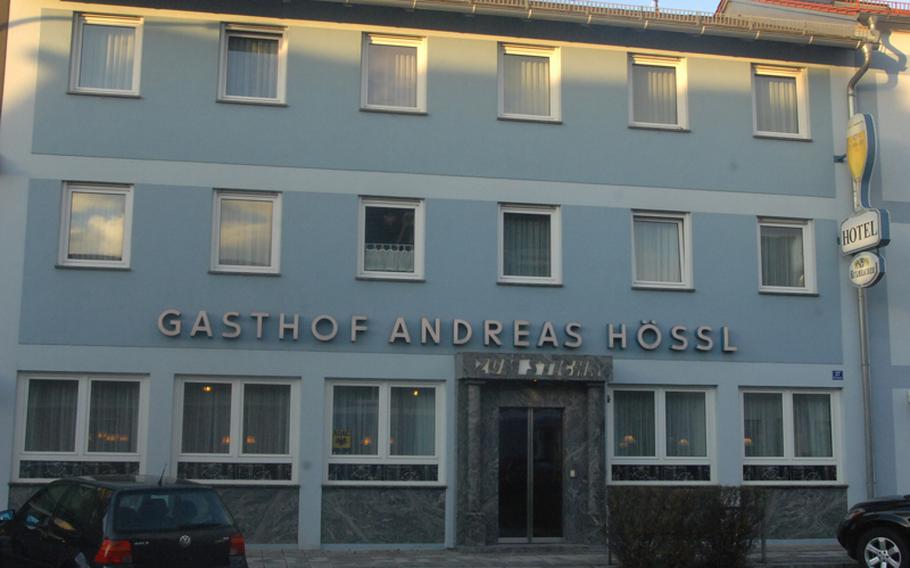 Buy Photo
Gasthof Andreas Hösl Zum Stich'n is a few hundred yards from the main entrance to Grafenwöhr Training Area. About 80 percent of its clientele are Americans. (Seth Robson/Stars and Stripes)

Buy Photo
Gasthof Andreas Hösl Zum Stich'n is a few hundred yards from the main entrance to Grafenwöhr Training Area. About 80 percent of its clientele are Americans. (Seth Robson/Stars and Stripes) 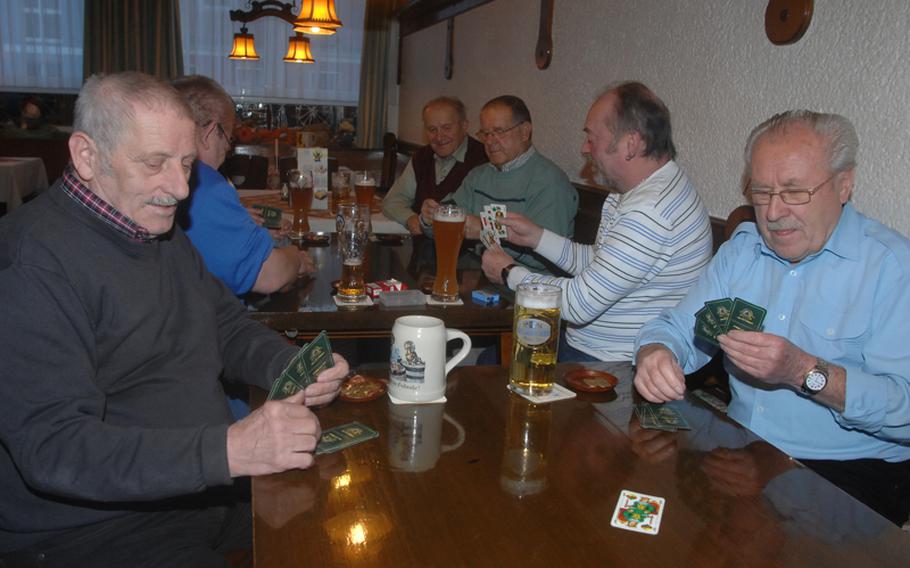 Buy Photo
Local Bavarians play cards at the 'Stammtisch' at Grafenwöhr's Gasthof Andreas Hösl Zum Stich'n on a Sunday. The hotel-restaurant serves primarly Americans, but it is also popular with Germans -- especially those who enjoy a good game of cards. (Seth Robson/Stars and Stripes)

Grafenw&ouml;hr Training Area has grown into one of the U.S. military&rsquo;s largest overseas facilities over the years, and Gasthof Andreas H&ouml;sl Zum Stich&rsquo;n has kept pace.

The hotel-restaurant, a few hundred yards from the training area&rsquo;s main gate, opened in 1965 to cater to the American military community, according to owner Andreas H&ouml;sl. And it still does a large portion of its business with the servicememebers who live and train at the base in southeastern Germany.

Originally built and operated as a guest house by his parents, the facility has expanded accordingly. In 1978, the family added a building with more rooms for guests behind the main structure on Grafenw&ouml;hr&rsquo;s main street. In 2003, as the Army began to greatly expand its forces in the area, H&ouml;sl acquired the building next door and added an outdoor beer garden. And last year, he bought the building across the road.

The hotel now has 40 rooms that are often full of Americans on temporary duty at the training area for the frequent military exercises held there to prepare units heading to combat zones like Iraq or Afghanistan.

H&ouml;sl, who learned to cook in Garmisch and took over the hotel and restaurant from his parents in 1984, said the building&rsquo;s beer garden was his dream for many years. Nowadays it is a popular summer hangout for Americans with local inside knowledge, he said.

Although 80 percent of the restaurant&rsquo;s clientele is American, there is a regular group of German customers who can be spotted in a corner most nights at the Stammtisch &mdash; table for regular customers &mdash; playing cards and downing mugs of Bavarian Kulmbacher beer.

The restaurant is named after the 18th-century owner of the house where the establishment got its start &mdash; a name it retained even though it burned to the ground in 1841 and was rebuilt. The part of Grafenw&ouml;hr where Zum Stich&rsquo;n is located was destroyed by Allied bombing raids during World War II, but diners can see the history of the town inside the restaurant. One of the features is a large depiction of the medieval walled town, which is preparing to celebrate its 650th anniversary.

As for the food, H&ouml;sl&rsquo;s specialties are T-bone steak and freshly caught local trout best washed down with a liter of Kulmbacher served up by his wife, Andrea.

Young soldiers looking for a fashionable night spot would be advised to stick with the bars, nightclubs and restaurants on Alte Amberger Strasse close to the training area&rsquo;s Gate 1. But for those looking for a place to stay during temporary duty at Grafenw&ouml;hr or for families looking for a warm, friendly place for a meal, the guest house is ideal.

Directions: From Grafenw&ouml;hr Training Area&rsquo;s main gate, turn left on Neue Amberger Strasse. The blue guesthouse is a few hundred yards down the road on the opposite side. It is not far from the old town.