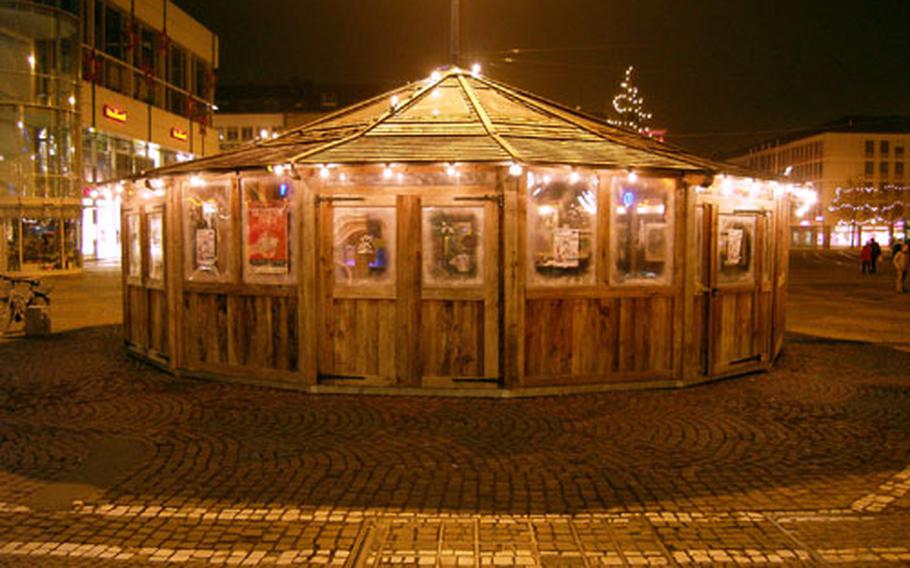 If this hastily erected wooden box in the middle of Darmstadt is a rockin’, then please come a knockin&#39;. Another Christmas season means the holiday Skihütte is back on the Luisenplatz in Darmstadt, Germany. (Michael Abrams / S&S)

Is there any worse time to be overseas in Europe than during the holidays? Last year, my first Christmas away, I spent the night in my tiny apartment with two packs of cigarettes and one of those mini kegs of hefeweizen.

But if you are in Europe and have managed to make some non-American friends while over here, latch on to them for the holidays. Sure, seeing them chill-axing with their families won&#8217;t help much, but each country has its own quirky traditions that I&#8217;m sure just rock if you&#8217;re local. And sometimes they rock for American transplants, too.

Take the Skih&#252;tte at the Luisenplatz in Darmstadt, Germany.

Every year, right after Thanksgiving &#8212; known overseas as Just Another Day &#8212; a little wooden building resembling a ski lodge is put up in the city square. Until Dec. 31, revelers will be able to live it up and party in there, as if they had just left their skis at the door.

There&#8217;s beer, warmed wine and the German version of sangria, which involves extra-long straws and a five-liter bowl. Maybe it&#8217;s just half a liter of sangria talking, but all of a sudden the holidays are feeling a lot warmer to me.

There is no cover charge and free entertainment in the form of drunken Germans belting out both holiday and traditional German pop radio standards. You probably won&#8217;t understand, but just sway back and forth and try to catch the eye of that hot chick over there.

Felix Blaat, a local 28-year-old German, friend of mine and all-around good egg, recommends going to the faux ski lodge on the weekends, even though the joint is open every day.

While you&#8217;ll be welcomed whenever you walk through the door, Blaat recommended linking up with some German friends before heading in.

Drink prices: Standard bar prices. About 3 euros for a big bottle of beer, up to about 25 euros for a five-liter bowl of sangria, with extended straws.

Clientele: Germans. If you&#8217;re from the States, you&#8217;re better off with some Deutsch buddies to really soak up the experience.

Dress: Come as you are.