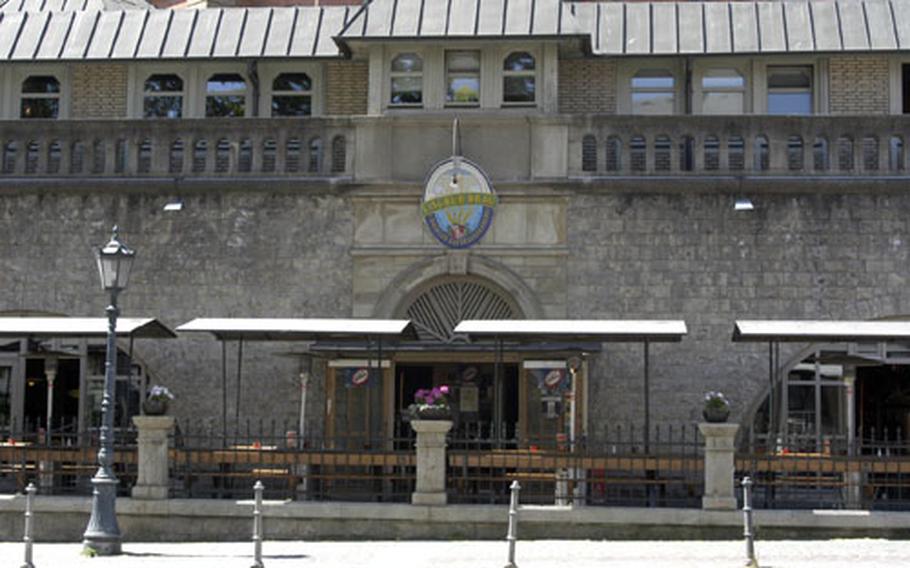 The Eisgrub-Bräu isin the heart of Mainz and is the perfect spot to enjoy a day or night of good food and good beer. (Mark Patton / S&S)

The Eisgrub-Bräu isin the heart of Mainz and is the perfect spot to enjoy a day or night of good food and good beer. (Mark Patton / S&S) 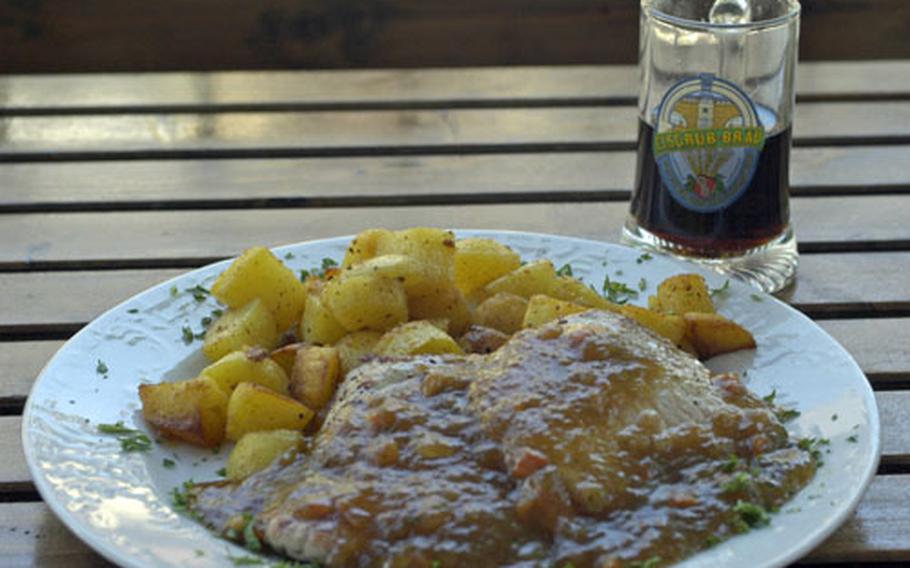 A lunch or dinner of pork steak with dark beer sauce and one of the house brews at the Eisgrub-Bräu is a nice way to relax. Whether ordering from the menu or opting for the buffet, it is hard to go wrong with your choice. (Mark Patton / S&S) 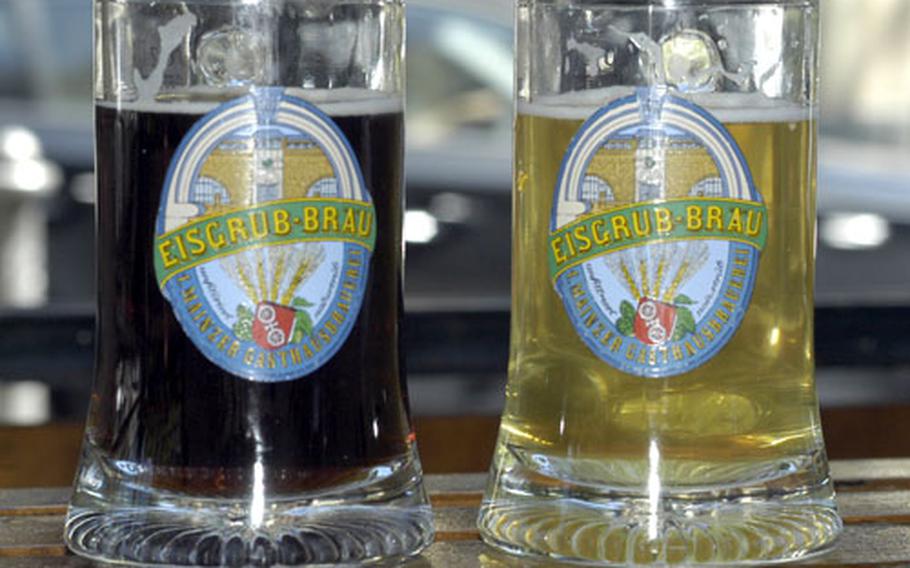 You can’t go wrong with either the dark or light beer offered at the Eisgrub-Bräu. The beer goes through several processes under the watchful eye of brewmaster Burghardt Kühn, a veteran brewer who has been with the Eisgrub since its inception. (Mark Patton / S&S) 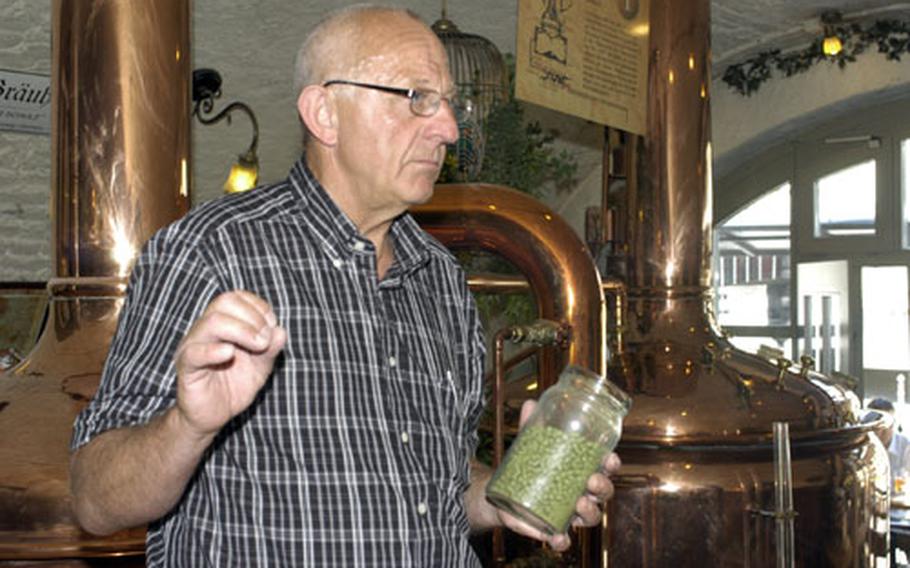 Burghardt Kühn, brewmaster at the Eisgrub-Bräu, holds a jar of hops as he gives a tour of his brewery. Kühn explained that the grassy smelling hops are used in his beer to add bitterness and flavor. (Mark Patton / S&S)

"No soldier can fight unless he is properly fed on beef and beer," John Churchill, the first duke of Marlborough, was quoted as saying 200 years ago. If that saying holds true today, I have found the perfect spot to develop the world&#8217;s ultimate army.

The Eisgrub-Br&#228;u is in the heart of Mainz, and although the brewery has been open for only 20 years, the building has been serving the city residents for a long time.

Originally, it was the entry to a system of vaults under what used to be the Eisgrubweg, or Ice Vault Road. In the 19th century, the vaults were used to store frozen chunks of the Rhine River, and in the summer they were utilized to store food and provisions for the residents. The invention of refrigeration changed that in 1876 and the vaults lay dormant for more than 100 years until the brewery was established.

Burghardt K&#252;hn, brewmaster at the Eisgrub, welcomed me and offered a tour of the brewery. K&#252;hn has been with the brewery since its opening and has been involved in beer brewing for 47 years. The 61-year-old has a youthful energy and perpetual smile, and from the moment he speaks, it is evident the pride he takes in his beer.

The Eisgrub has a house light and dark beer and on occasion, a special bock. K&#252;hn explained that 60 percent of the beer the brewery sells is the light, because being in the wine region of Germany, people prefer a beer that is not as bitter. My personal favorite was the dark offering, though. It has a smooth texture but a substantial bitterness and flavor.

Although beer is definitely the center of this establishment, the food holds its own.

Some friends of mine settled on the lunch buffet, which at 5.90 euros is hard to beat for an all-you-can-eat affair. The buffet, which is offered Monday through Friday from noon to 4 p.m. features a healthy salad and deli meat counter along with soup and fresh hot entrees ranging from bratwurst to meatballs. Every day, a breakfast buffet is also offered from 9 a.m. to noon with coffee or tea for 6.90 euros.

I decided to try something from the menu and after perusing the many meats and sauces, settled on a pork steak with dark beer sauce. After ordering, I wondered if the dark beer sauce would be a little too heavy for the day&#8217;s warm temperatures, but my fears were unsubstantiated. The meat was surprisingly tender and the sauce was excellent. It had a light and spicy flavor which complemented the pork perfectly.

For groups looking to enjoy a night out at the brewery, a wooden board holding 12 beers of choice, called a meter, is offered. They also offer a tower of beer, a large contraption that looks like a giant tube with its own tap, brought to your table.

One word of caution, the Eisgrub still incorporates a tradition that is lost in many German establishments. When you order a beer, your glass will not go empty until you put the round cardboard coaster on top saying you&#8217;re done. Until then, the staff will see to it that your glass never runs dry.

Directions: From Wiesbaden Army Airfield, take B455 through Mainz-Kastel and at the second roundabout, take the exit for B40 and cross the river. After the crossing, immediately turn left onto B40 toward Worms. Continue straight for about a mile, and then turn right onto Holzhofstrasse and go for about a half-mile until the road merges into Weissliliengasse. Eisgrub-Br&#228;u is on the left; there is limited street parking and a parking garage on the right.

Food: Breakfast and lunch buffets. Typical German offerings with a wide variety of meats and sauces, plus large appetizer selection and several soups. A child&#8217;s menu is available.

Prices: A glass of the house-brewed beer starts at 1.70 euros. Food prices range from 5.90 euros for the lunch buffet to 17.90 euros for the &#8220;Brew House plate,&#8221; which features small steaks and another meat dish, plus salad, side order of choice and the option between a daily dessert, espresso or schnapps.

Dress: Come as you are.

Brewery tours are highly encouraged, in English or German, but call for a reservation.