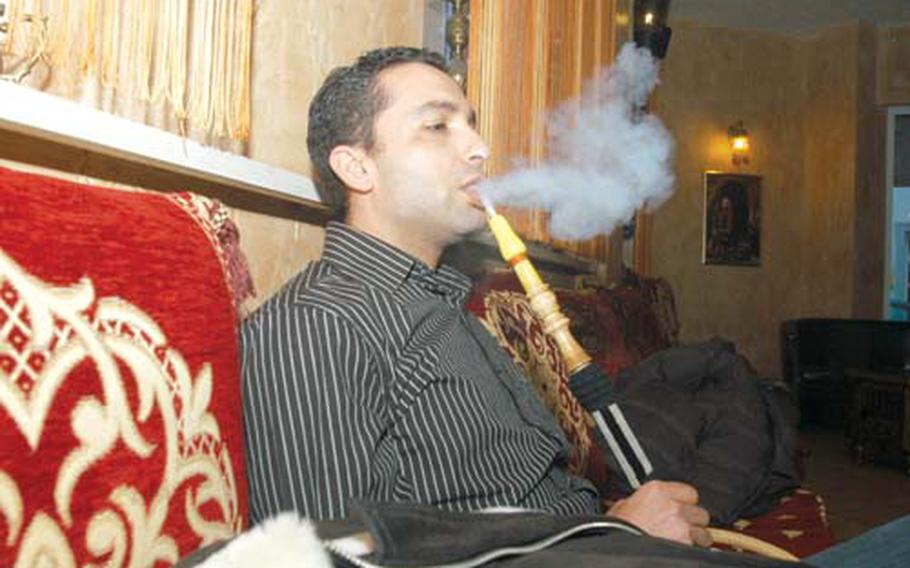 A blue cloud of smoke hovers in the bar.

The smoke, though, doesn&#8217;t smell acrid like that of a cigarette or a cigar. Rather, it is tinged with sweet fruit. That&#8217;s because the smoke comes from hookahs.

The trend of smoking fruit-flavored tobacco from a hookah, or water pipe, has been puffing along in Germany, and hookah bars, or shisha bars, have become a mainstay in many cities and towns.

At these bars, people sit around a water pipe, enjoying tobacco flavors ranging from the humdrum to the exotic. For the newbie, though, the large, ornate pipe and the plethora of flavors can be a little daunting.

The way it works is a piece of hot charcoal is placed on top of the water pipe, and it roasts the tobacco underneath. When a person sucks air through the tube, it draws smoke through the stem of the pipe into a glass bottom bowl filled with water.

The pipe was invented in India during the court of the Mughal Emperor Akbhar in the late 1500s, according to V.M. Sivaramakrishnan&#8217;s "Tobacco and Areca Nut," a book that traces the various ways the tobacco plant is used. The emperor was presented a gift of tobacco leaves and a jewel-encrusted pipe. Afraid the tobacco smoke was dangerous, Akbhar&#8217;s physician fashioned a pipe in which the smoke passed through water, purifying it.

The myth of the water&#8217;s purification powers has been debunked; hookah smoking carries the same risks as smoking any other tobacco product. But the water does moisten and cool the smoke, making it less irritating to the throat.

At shisha bars, a menu describes, in detail, the many fruit flavors offered: cherry, melon, grape, and several apple blends &#8212; from the tangy regular apple to the much sweeter double apple. Djamel Annon, the owner of Dubai, a hookah cafe in St. Wendel, Germany, says his customers are always searching for the newest flavor.

Some places even combine different tobaccos to concoct special blends.

The bars also typically offer an array of mixed drinks, beers and teas. Annon&#8217;s place is patterned on a Moroccan cafe, with coffee drinks as well as Chai teas.

The bars&#8217; atmosphere can vary. Dubai has soft lighting, Arabic music and cushy couches where customers can chat as they puff away. At a nearby hookah bar, hip-hop music thumps from speakers and blinking strobe lights capture the haze of smoke. It all depends on what kind of night you are looking for, Annon says.

"With me, they want to see the Arabic style," he says. "Other people want the night club atmosphere. [Each bar] has his own customer."

Prices: Ordering a hookah costs 5 euros and includes the tobacco; it can be shared among several friends. Coffee drinks and teas are sold for about 2 to 3 euros.

English menu: No. But the owner speaks English.

Directions: From the Kaiserslautern/Ramstein/Landstuhl area, take Autobahn 62 toward Trier and exit at Kusel. Turn left and follow the highway toward St. Wendel. From Baumholder, take L348 to the intersection of Eichenlaubstra&#223;e/L133 and turn left; then turn left at L132/Sankt-Wendeler-Strasse, right at L132/Mommstrass and finally left on Br&#252;hlstra&#223;e.