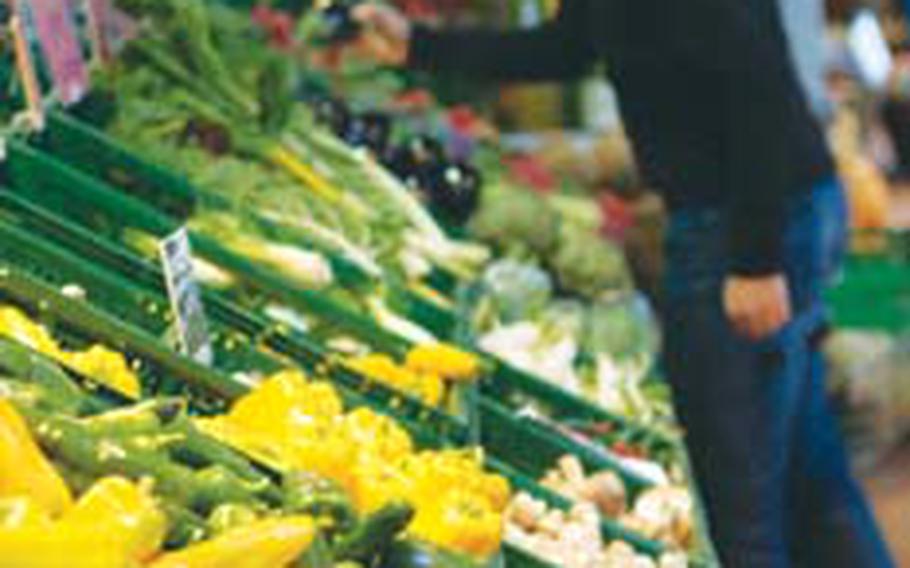 Fresh produce grown on the farms of the Domäne Mechtildshausen line the aisles at the Domäne’s market hall. The Wiesbaden market also features juices, jams and a selection of organically produced wines. (Mark Patton / S&S)

Fresh produce grown on the farms of the Domäne Mechtildshausen line the aisles at the Domäne’s market hall. The Wiesbaden market also features juices, jams and a selection of organically produced wines. (Mark Patton / S&S) 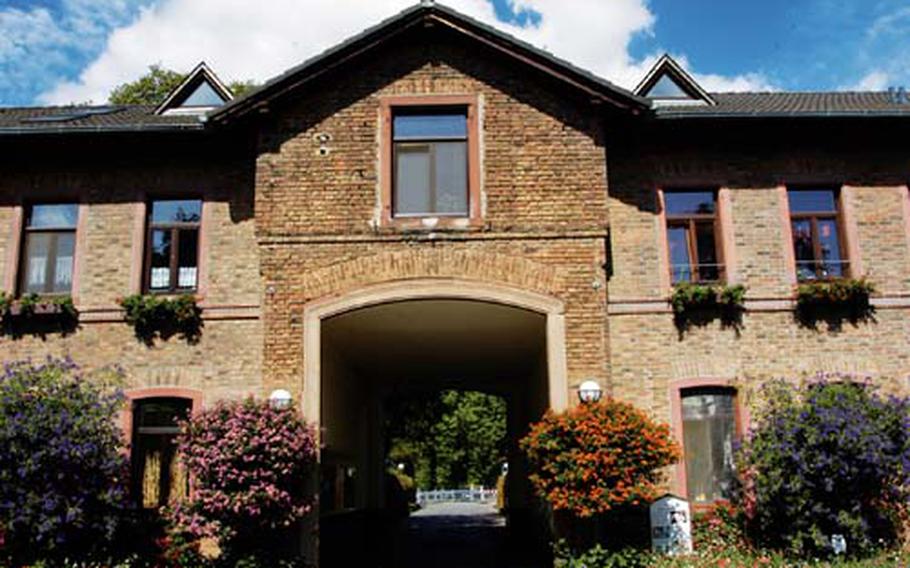 This is the main entrance to the Domäne Mechtildshausen complex. When the present managers leased the Domäne from the state in 1987, the site began to produce according to organic principles and in 1992, the Domäne was recognized as an organic farmer by the European community. (Mark Patton / S&S)

My neighbors mentioned that they were going to eat at a restaurant right across from Wiesbaden Army Airfield. I have been all over the airfield and its perimeter and I have never seen a restaurant within walking distance. I decided to check it out and see what I have been missing.

From the outside, Dom&#228;ne Mechtildshausen looks like a farm complex, but once inside, I felt as though I had entered an Old World secret village as horses passed by and people flowed through the streets. I realized the Dom&#228;ne was much more than a restaurant. Wooden arrows pointed out directions to a butcher shop, a market, a guest house, a cafe, a restaurant.

Christoph Zentgraf, who oversees the day-to-day operations, said the Dom&#228;ne goes back at least 1,500 years and has provided emperors and kings with agricultural products throughout the ages.

When the present managers leased the Dom&#228;ne from the state in 1987, the site began to produce according to organic principles and in 1992, the Dom&#228;ne was recognized as an organic farmer by the European community.

There are two places to eat, a gourmet restaurant at the guest house and the more casual Cafe und Weinstube restaurant. I chose the Weinstube where menu options include daily specials of beef, poultry and pork dishes, all from the Dom&#228;ne&#8217;s own animals. The vegetables and fruit are also mostly home-grown without using chemical or synthetic fertilizers. More than 80 kinds of vegetables and a multitude of fruit are grown on the Dom&#228;ne&#8217;s property.

I settled on a pork dish served with fresh potatoes and kohlrabi, which is similar to a turnip. The food didn&#8217;t disappoint, and the pork was surprisingly tender. The Weinstube has a large wine selection, mostly German and French. There is indoor seating amid Mediterranean-style decor and ample outdoor seating with spectacular views.

Afterward, I took the time to check out the various other offerings at the Dom&#228;ne. I started at the organic market, featuring the Dom&#228;ne&#8217;s fresh fruit and vegetables customers can take home. Also, farm-made juices and jams are sold, along with a variety of organically produced wines. It even sells skin-care products and makeup using some of its own ingredients.

The Dom&#228;ne&#8217;s bakery and cheese shop sells bread, cakes and pastries made on site as well as dairy products and its own cheeses, including homemade mozzarella. There is also a cafe that features a breakfast buffet and a homemade-ice-cream shop.

The butcher shop is a meat-lover&#8217;s paradise. Brochures are available that explain how the animals are raised and what goes into their feeding and living conditions.

If you plan to go for a quick lunch during the work week, be warned. Sure, the service is fast, but you will be tempted to spend time browsing or shopping, and with park benches everywhere and the relaxing atmosphere, you might just blow off the rest of the day.

Prices: From 7.50 to 12.50 euros for the specials of the day. Regular salads and meals average about 7 euros. The Cafe und Weinstube also offer kids&#8217; meals, which start at 3.80 euros. At the Guest House Restaurant, a five-course gourmet meal costs 52 euros without drinks.