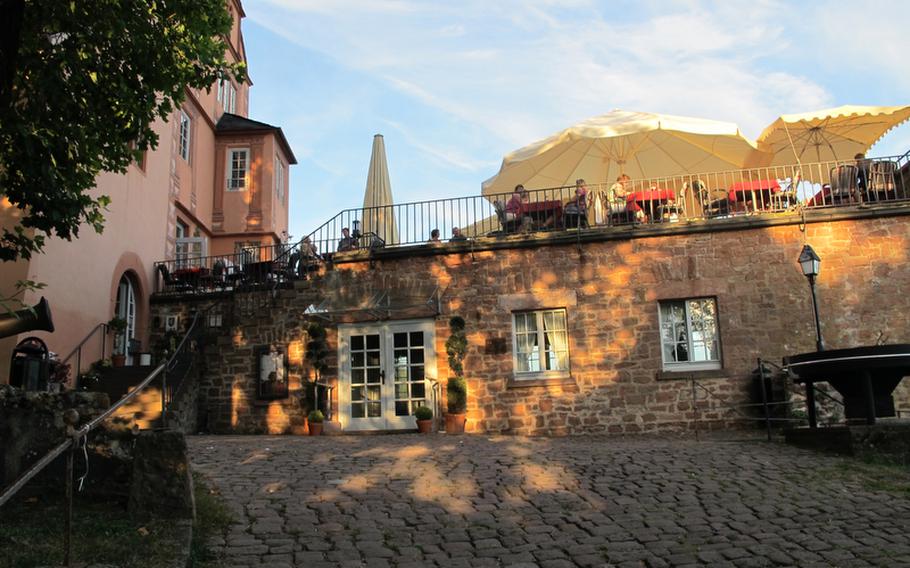 The Hirschhorn Castle restaurant, near Heidelberg, Germany, from the entrance below. The restaurant's terrace provides a stunning view of the Neckar River below and the hills of the Odenwald. (Nancy Montgomery/Stars and Stripes)

The Hirschhorn Castle restaurant, near Heidelberg, Germany, from the entrance below. The restaurant's terrace provides a stunning view of the Neckar River below and the hills of the Odenwald. (Nancy Montgomery/Stars and Stripes) 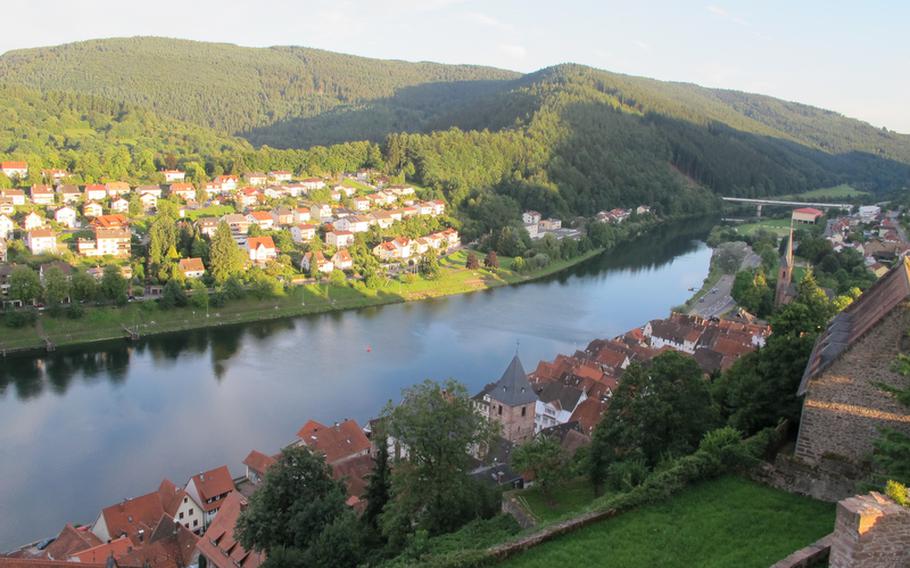 The view from the terrace of the Hirschhorn Castle restaurant is stunning, with the Neckar River weaving a path through the hills of the Odenwald. (Nancy Montgomery/Stars and Stripes) 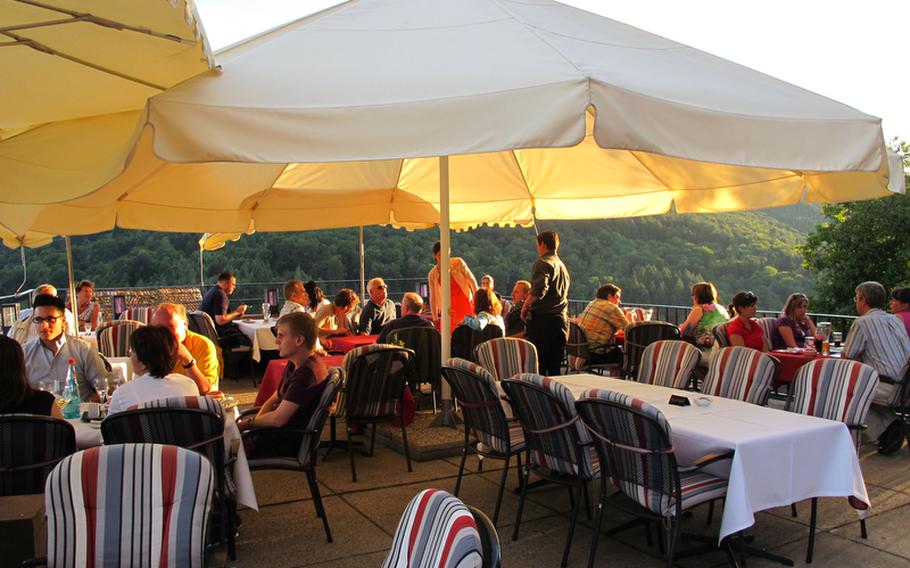 Diners enjoy the great weather and the spectacular views from the terrace of the Hirschhorn Castle restaurant, near Heidelberg, Germany. (Nancy Montgomery/Stars and Stripes) 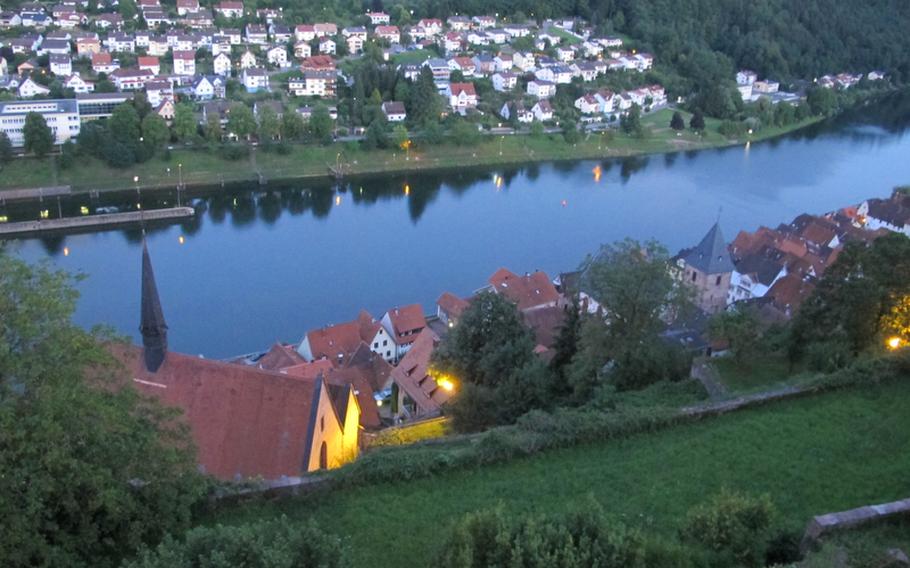 In the twilight, the view from the terrace of the Hirschhorn Castle restaurant becomes even more magical as dots of light decorate the town and river below. (Nancy Montgomery/Stars and Stripes) 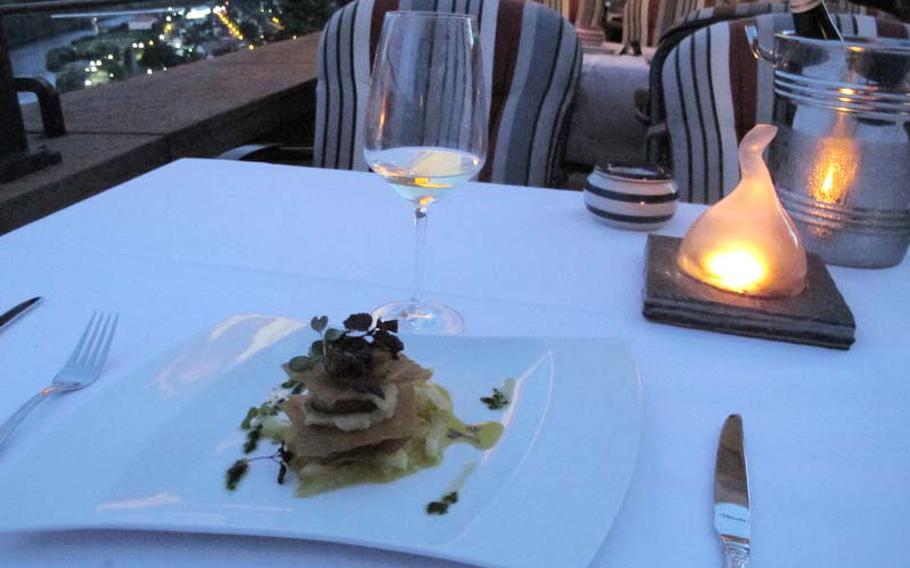 An appetizer of scallops with lemongrass puree and fennel-orange vegetables rests near a glass of wine and a candle before being devoured at the Hirschhorn Castle restaurant. (Nancy Montgomery/Stars and Stripes)

Remember that time we dined at the castle?

Few Americans can truthfully say that sentence. There are no real castles in the U.S., let alone real castles with restaurants.

But in Germany, you can&rsquo;t throw a rock without hitting a castle. Dozens have restaurants, among them one about 15 miles from Heidelberg that offers an idyllic experience any evil queen or wealthy huntsman would enjoy.

The Hirschhorn Castle restaurant, with a spacious, sunny terrace providing spectacular views of locks and boats and white swans on the Neckar River below, and to the side, the deep, wooded hills of the Odenwald, is somewhere special.

The restaurant, along with a small hotel, is built on the ruins of a castle dating to the 13th century, when the Hirschhorn princelings built their fortress high on a hill and offered protection that let the town of the same name grow and prosper.

The road there, the B37, winds alongside the Neckar, first one side, then the other, then turns into the woods and up the hill before passing through a stone archway to end in a cobblestone courtyard.

Don&rsquo;t leave your wallet in the car. And be prepared to enjoy rich, undeniably fancy dishes that are also creative and even a little whimsical.

Yes, the food is wonderful. But the view and the ambience are magical.

On a recent Sunday evening, with the sun still shining on the river, we began with a pretty peach-colored house cocktail and another made with a hibiscus flower.

We ordered the restaurant&rsquo;s appetizer sampler, and each was more delicious than the next, including a creamy soup with slivers of orange zest and chili and ginger foam on top. It was served in a cup and looked exactly like a cappuccino.

The menu is large, featuring assortments of appetizers and desserts, with fish and chicken, beef and lamb &mdash; and, for a simpler taste, a Wiener schnitzel served with potato salad or roasted potatoes. There are also three vegetarian dishes, including eggplant lasagna, the least expensive entr&eacute;e on the menu at about $18.

My entr&eacute;e was called Saltimbocca Rinderfilet, which translates from the Italian and German as &ldquo;jump in the mouth&rdquo; and &ldquo;beef tenderloin,&rdquo; respectively. It involved, I think, a thin beef filet stuffed with prosciutto or bacon and herbs, possibly including sage. It did not, however, make my mouth jump as much as what it came with: slices of truffled polenta. Two of my favorite things, together at last.

My companion had the lamb, with roasted vegetables and a sort of complicated potato tot, mashed and reassembled with onions and herbs, in a honey-thyme sauce, for $34. Soon it was gone, probably to his midsection.

I didn&rsquo;t finish my Saltimbocca, and it&rsquo;s clear the restaurant isn&rsquo;t accustomed to doggy-bag requests. My leftovers were placed in a used mascarpone cheese tub covered with aluminum foil.