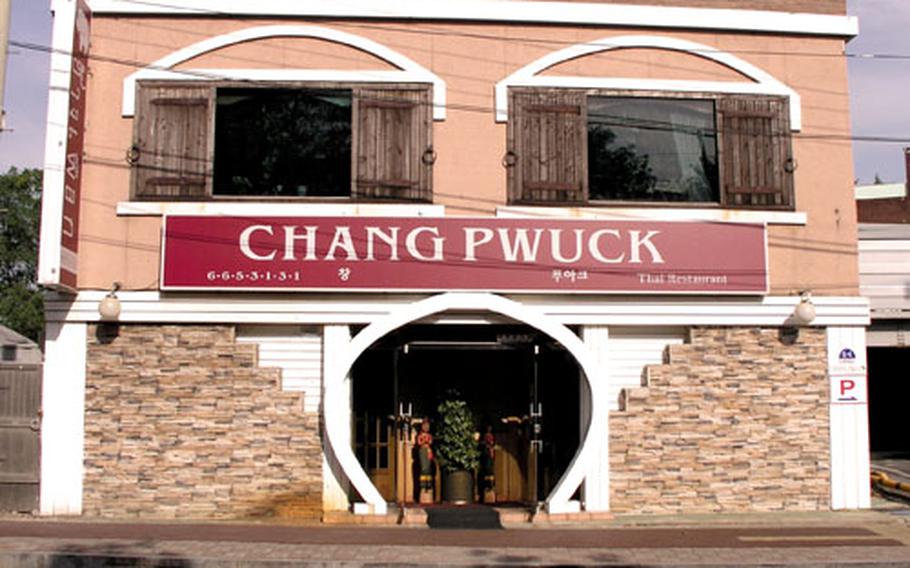 The Chang Pwuck Thai restaurant is just yards from the main gate of Osan Air Base in the Songtan section of Pyeongtaek, South Korea. (Franklin Fisher / S&S)

PYEONGTAEK, South Korea &#8212; Less than a minute&#8217;s walk from Osan Air Base is a Thai restaurant with a Thai kitchen staff, English-language menus with color photos of each dish, exotic desserts and a Southeast Asian d&#233;cor that emphasizes natural wood and traditional Thai designs.

About 80 percent of Chang Pwuck&#8217;s customers are Americans, most of them from Osan Air Base and other U.S. military communities on the peninsula, said owner Kim Chong-pun, who uses the English name &#8220;Catherine.&#8221; The two-story restaurant is open for lunch and dinner, from 11 a.m. to 9:30 p.m. seven days a week.

Chang Pwuck means &#8220;white elephant,&#8221; Kim said, and the d&#233;cor employs an elephant motif in the form of wall hangings, paintings and other images. The walls and ceiling are mainly in a natural walnut-like finish. Tables and chairs are of dark brown wood.

When we dropped in for lunch the other day we found a clean, pleasant atmosphere and polite service.

The menu offers such appetizers as spring rolls or chicken in peanut sauce, a variety of noodle and rice dishes and special dishes like the curried prawns we had.

There are plenty of beverages on the menu &#8212; local and imported beers, whiskey, scotch, coffee, tea, and soft drinks.

Large groups such as those holding unit hail and farewell gatherings can be seated in the upstairs dining room, which includes a bar. For groups larger than 20, Kim can cater a buffet.

See After Hours for more reviews of restaurants and nightclubs in South Korea.

English menu: Yes, with color photos of each dish.

Clientele: Bills itself as a &#8220;family restaurant.&#8221; Draws couples, small groups of friends; also large parties and functions put on by military units.

Location: From the Osan Air Base main gate, cross the street in the direction of the Seven Eleven convenience store, but once across immediately face left and proceed up the sidewalk that runs parallel to the street. Within a minute&#8217;s walk you&#8217;ll reach Chang Pwuck, a beige building with white trim and a large red sign.