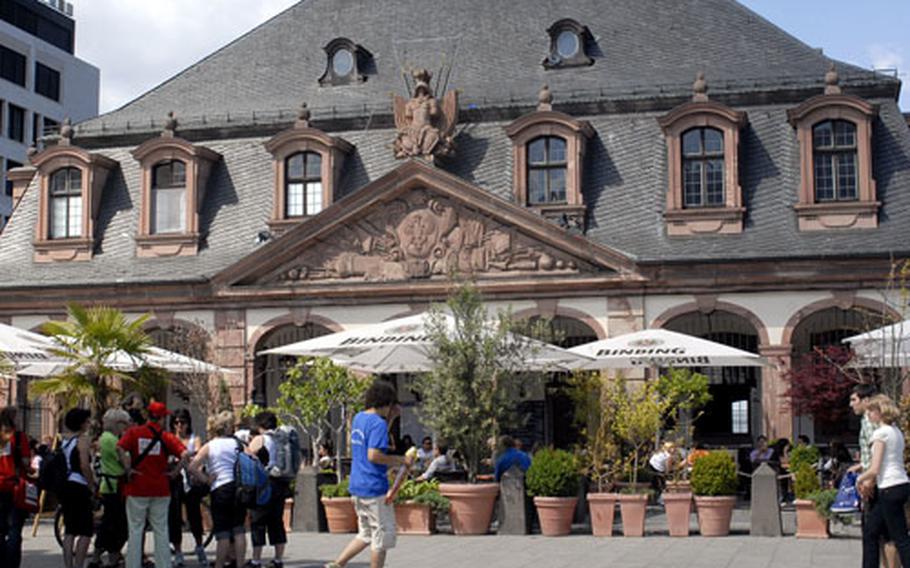 Café Hauptwache is located in a central part of Frankfurt and most of its patrons are tourists. It has menus in German and English. (Mark Abramson / S&S)

Enjoying a scrumptious schnitzel under the sun, ordered off a menu that an American can make out &#8212; what a way to spend a spring day in the Deutschland.

That place to absorb some rays and down some good grub is Caf&#233; Hauptwache. The restaurant and bar bills itself as being in the heart of Frankfurt, close to the R&#246;merberg square and near a large multi-level shopping mall and plaza where live music blares on weekends and weekdays.

According to its Web site, caf&#233;-hauptwache.de, the eatery is in a historic building that dates back to 1729. It was later restored after being almost completely destroyed by Allied bombing in World War II. And it has operated as a restaurant since 1904.

But owner Sam Kamran said he gave the place new legs when he bought it seven years ago.

"I bought it because it was a great location and I made it (geared for people who are) a lot younger. Before, it was an old people place," Kamran said. "It is a historical building and it is the most central (location in Frankfurt)."

Kamran also described Caf&#233; Hauptwache as simply a place to enjoy a cup of coffee before he took over and spiced up the menu and added drinks, like Binding beer.

And the lunch and dinner choices are as varied as the prices. On the high end are dishes like Argentenian Angus beef filet and salmon. There are also dishes like schnitzel Viennese style, salads, pastas and apple strudels.

Top sellers on the menu include the Caesar salad with chicken, and the aforementioned Binding is popular with the patrons. Schnitzels are another favorite, Kamran said.

The restaurant has plenty of outdoor seating dotted with palm trees and other greenery and umbrellas to shield patrons from the sun. And inside is a restaurant/bar that transforms into a club-like venue on the weekends. The two-story bar and restaurant is painted with yellowish and crimson hues.

Kamran boasts that he could seat about 450 patrons at a time and that he averages about 1,500 diners a day.

Clientele: About 80 percent are tourists.