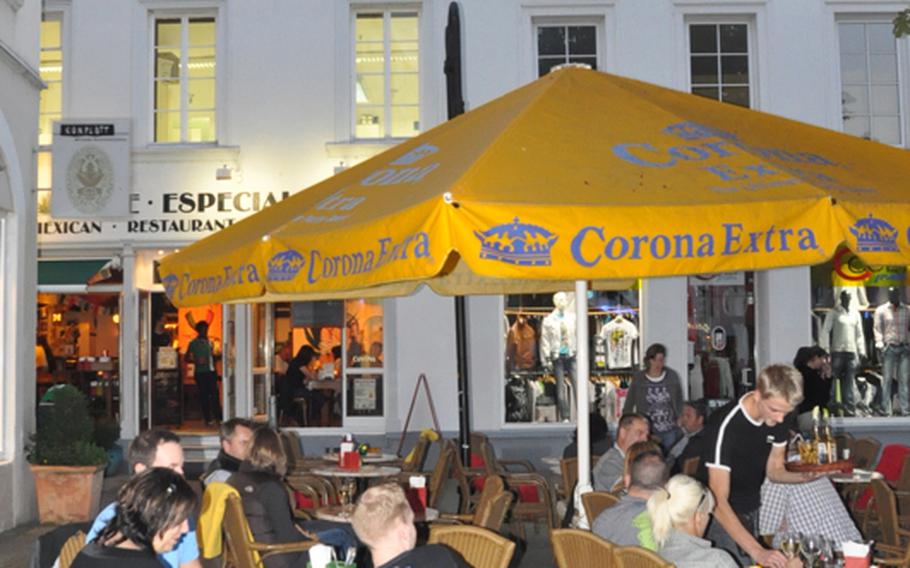 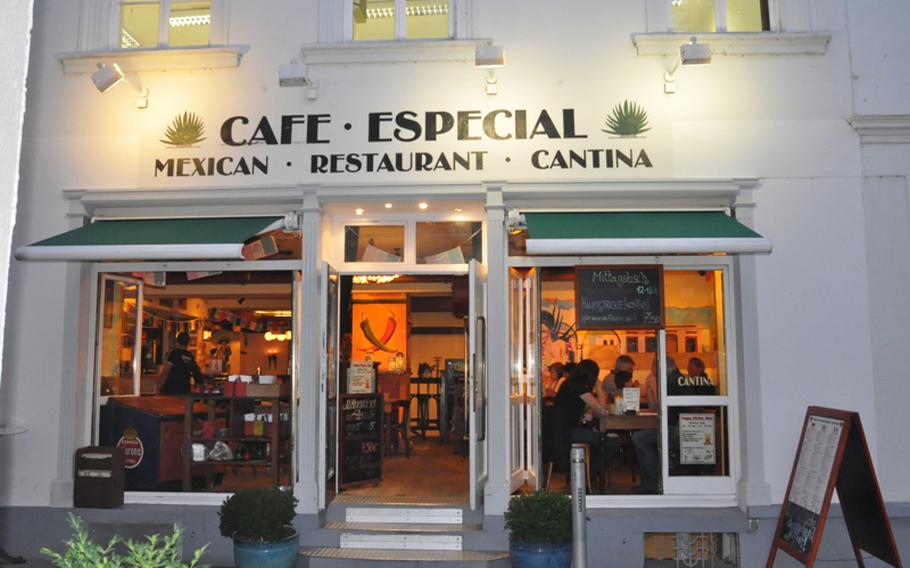 Buy Photo
For those missing a taste of home, Café Especial in Saarbrücken, Germany, serves up authentic Tex-Mex food, including fajitas, enchiladas, chimichangas and burritos. (Seth Robbins/Stars and Stripes) Buy Photo
Patrons sit at Café Especial's bar, where you can order several fruit-flavored margaritas as well as an assortment of tequilas served in the German style, in which lime and salt is replaced with cinnamon and orange wedges. (Seth Robbins/Stars and Stripes) 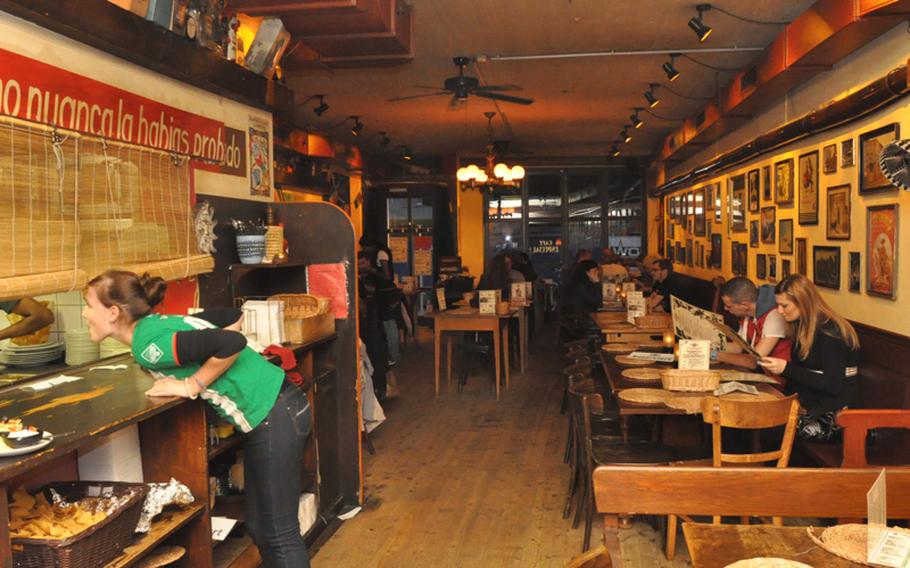 Buy Photo
Rows of tables inside Café Especial in Saarbrücken, Germany, are surrounded by a pastiche of south-of-the-border kitsch. (Seth Robbins/Stars and Stripes) Buy Photo
The enchiladas at Café Especial in Saarbrücken, Germany, are so large that it is hard to tell where the tortilla ends and the mass of rice and refried beans begins. The entire dish is topped with freshly melted Monterey Jack cheese. (Seth Robbins/Stars and Stripes)

Caf&eacute; Especial in Saarbr&uuml;cken, Germany, has all the staples of an American Tex-Mex joint: fajitas that sizzle; burritos heaped with refried beans and melted cheese; fruit-flavored margaritas rimmed with salt; and south-of-the-border kitsch on the walls.

For Americans living in the land of the wurst, the restaurant is a rare taste of home. All that is missing is a mariachi band playing &ldquo;La Bamba&rdquo; over and over again.

Situated on Saarbr&uuml;cken&rsquo;s St. Johanner Markt, the restaurant is easy to distinguish from the many neighboring eateries by the golden Corona umbrellas outside. Inside, rows of tables are packed with patrons, many sipping bowl-sized margaritas.

The margaritas, which can be ordered in regular size or jumbo, in lime or mango or strawberry, complement the warmed tortilla chips and salsa on every table. The restaurant&rsquo;s many tequilas are served German style, in which lime and salt is replaced with cinnamon and orange wedges. The sweet fruit dampens the burn of the tequila, bringing the drink more in line with local tastes.

Appetizers are large enough for sharing, and include the familiar quesadillas, flautas and nachos layered with freshly melted cheese (Monterey Jack, not the ubiquitous Gouda), jalapenos, tomatoes and chicken or beef. Entr&eacute;es, at 11 to 13 euros each, include fajitas, burritos, enchiladas, several types of tacos, tostadas and chimichangas.

German restaurants often mistake a burrito for a limp sandwich wrap topped with canned sauce. But Caf&eacute; Especial&rsquo;s burrito bulged with black beans, salsa, lettuce, tomatoes and strips of grilled steak, all poking out from under a gooey mass of Jack cheese. On a recent visit, enchiladas suizas were topped with a fresh-tasting green chili sauce. The tortilla was so large &mdash; stuffed with tender chicken strips and cheese &mdash; that it was hard to tell where it ended and the mass of rice and refried beans began.

Many of Caf&eacute; Especial&rsquo;s dishes can be ordered without meat, as in the United States, and the wait staff has taken on a distinctly American demeanor, eschewing German formality for overt friendliness.

Halfway through some subpar margaritas, a waitress took pity, happily retrieving them and returning them filled to the brim, tasting perfect, for no added charge. She had performed some &ldquo;Zauber&rdquo; &mdash; magic &mdash; on the drinks, she explained. The margaritas were now sickly sweet and neon-green and in no way resembled anything one could ever find in Mexico. In other words, they were just perfect.

Directions: Caf&eacute; Especial is in the heart of Saarbr&uuml;cken&rsquo;s pedestrian district, in the St. Johanner Markt. From Baumholder, take Autobahn 62 toward A6/Kaiserslautern and Pirmasens and merge onto A6 toward Saarbr&uuml;cken. Follow signs to the city center. Parking is limited, so search for a spot anywhere near the pedestrian district. Then head for the main square; you will know you are there when you see a large fountain. Caf&eacute; Especial is on the square; you can&rsquo;t miss the golden Corona umbrellas.

Food: All the staples of Tex-Mex food, including nachos, fajitas, burritos, enchiladas, quesadillas and chimichangas.

Prices: Appetizers cost between 5 and 7 euros, entrees are 11 to 13 euros. Beers range from 2 euros to 5 euros.

Phone: 0681-3906619; the restaurant accepts reservations, and it can get pretty packed on Friday nights and weekends.