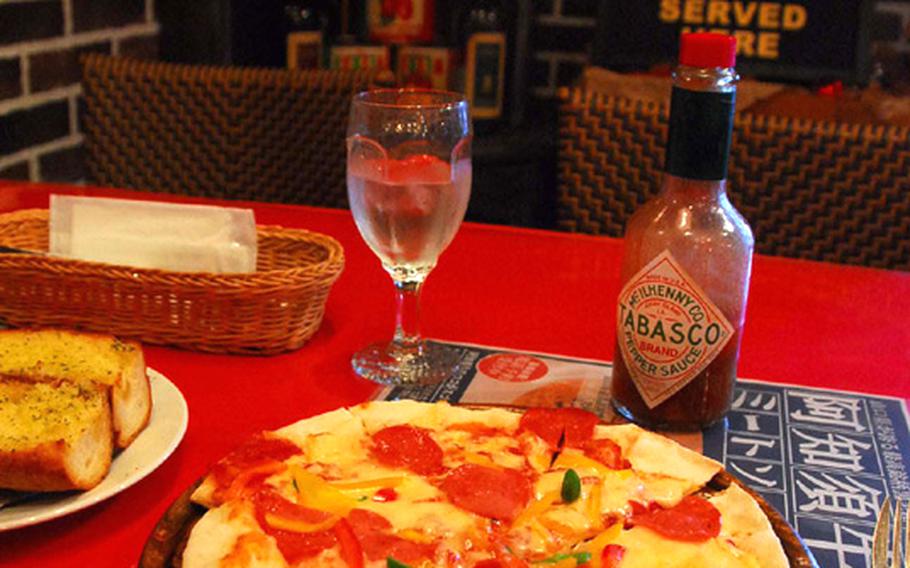 Don&rsquo;t blame American chefs if they go a little heavy-handed with Japanese dishes.

After all, a little cream cheese in a sushi roll can be a good thing.

It probably wouldn&rsquo;t fly in a traditional Japanese kitchen, but it suits our dairy-loving American palates just fine.

When food migrates across borders, it bends to local tastes in good ways and bad ways &mdash; depending on your point of view.

That&rsquo;s why I don&rsquo;t hold a grudge against Caf&eacute; Campagne, an Italian restaurant on the outskirts of Iwakuni that is popular with residents of the local Marine Corps air station.

The restaurant also makes an effort to feel authentic with red tablecloths, oversized plates and jars of olives. I ate dinner under a framed poster of Gregory Peck and Audrey Hepburn in &ldquo;Roman Holiday.&rdquo;

The meal, starting with a five-course appetizer, fell disappointingly short. Cold cuts of turkey with mayo and mustard reminded me of a late-night snack picked directly from the meat drawer of my refrigerator &mdash; if I was too lazy to add bread. Sashimi-style slices of raw fish were covered with what I can only guess was store-bought Italian dressing.

The only inspired appetizer was a sweet, nutty mixture of lotus root and tuna, which I suspect did not have much of an Italian lineage.

I don&rsquo;t usually order pasta in restaurants, but I was eager to try the house homemade meat sauce with eggplant as a main course.

Despite the poor showing on appetizers and the unremarkable pizza, my hopes were still high. How could a homemade meat sauce with eggplant not be good?

The pasta dish can be described in a single word: sweet.

My palate was searching for all the tangy and spicy flavors I&rsquo;ve come to appreciate from Italian food and was coming up empty.

It seems Campagne imported all the right ideas for dishes and ingredients from abroad but was missing the most crucial of all ingredients &mdash; the subtle nuances of flavor that make truly great, memorable Italian food.

To be fair, the restaurant had a nice atmosphere, wonderful service and the food came quickly.

But I might wait until my next trip to the United States or Europe before I try the meat sauce again.