After Hours: American diner in Germany 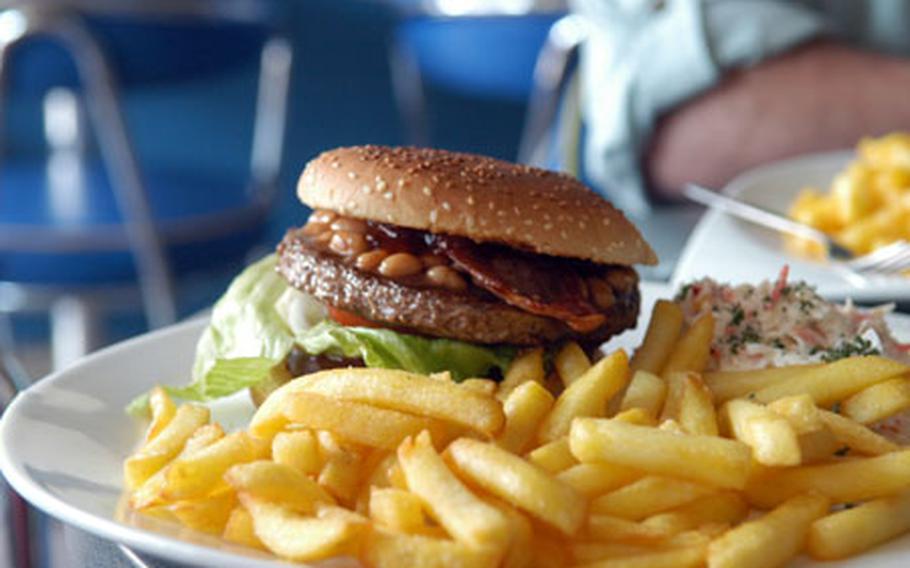 Patrons can chow down on the Ranger Burger at the Roadside Diner in Griesheim, Germany. The diner has that greasy spoon feel with solid American fare like burgers, chili dogs and corn on the cob. (Geoff Ziezulewicz / S&S)

But bless &#8217;em for trying. Mimicking a culture&#8217;s food from the outside is all about perception, and the Roadside Diner near Darmstadt does its best to recreate that greasy spoon culture.

Still, to make sure I didn&#8217;t get too swept up in the Americana, I enlisted two fellow Stripes reporters to help me make sense of the lil&#8217; slice of America that has sprouted in Griesheim.

Geoff: So, gasbags, what did you think?

Matt Millham: I was swept away. I have to admit, they got the smokiness of the American diner down pat, and the statue of Ms. Liberty and old glory sitting up there made me think they almost had it. But then the waitress didn&#8217;t know a lick of English, leaving me to fumble through the menu with my weak Deutsch. At least the entrees were given wholesome American names like Ranger Burger.

Geoff: I wasn&#8217;t sure if they were talking about the Texas Rangers or an Army Ranger. But hey, any burger that comes with baked beans on top can&#8217;t be all that bad. They had corn on the cob on the menu, but I couldn&#8217;t figure out how to ask the waitress for corn on the cob. Why do you think corn on the cob isn&#8217;t a more popular dish?

Matt: Probably because they haven&#8217;t yet found a way to turn it into schnitzel.

Geoff: My chicken cheese chiliburger didn&#8217;t have chili on it as expected, but instead had a big chili pepper inside. All in all, not a bad bite, and the fries were good. Matt, how was that Ranger Burger?

Matt: There&#8217;s only one reason I got the Ranger Burger. I wanted to smash the thing down my gullet, jump up on a chair and scream &#8220;Ranger Down!&#8221; I mean, the thing had baked beans and barbecue sauce, along with a slab of bacon.

Drew Brown: I was pleasantly surprised. The burger was juicy and cooked just right. Nothing weird on it, just the standard lettuce, tomato and pickle. The fries were crispy and spot-on. And while I wolfed it down, I gotta admit, there is something fundamentally wrong about slathering a burger with Thousand Island Dressing. Other than that, no complaints.

Geoff: Man, nothing beats that 2:15 p.m. post-lunch post-Roadside Diner glaze, huh? So in short, the place is well-priced, has milkshakes and beans and corn on the cob, as well as a host of other American staples, like a chili cheese dog. Gentleman, final thoughts?