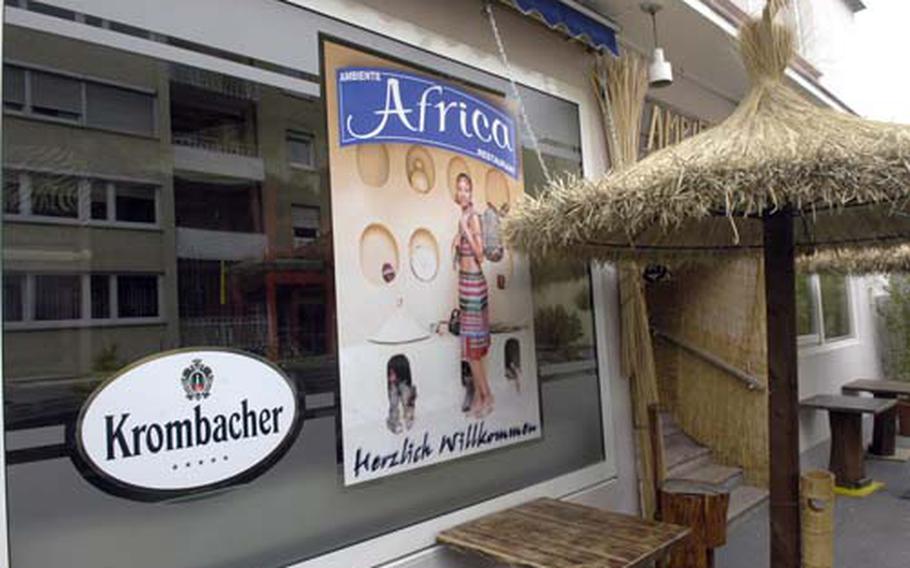 At Ambiente Africa Restaurant in Stuttgart, the menu has a wide range of exotic dishes, including zebra, crocodile and antelope. For the less adventurous, there’s also a diverse selection of fish, chicken and other meat. If you plan a visit, be sure to make a reservation since the tables are frequently filled. (John Vandiver / S&S)

At Ambiente Africa, a small, family-owned restaurant in downtown Stuttgart, the menu is thick and there&#8217;s African cuisine of endless variety. Plenty of it is of the nonthreatening sort, and surely delicious to boot.

But how often do you get a shot at eating a crocodile? Or, for that matter, a zebra? How about a python? That one has to be specially ordered.

Confronted with so much exotic stuff, why would one really want to bother with some sort of vegetarian concoction or a boring lamb dressed up in fancy spices?

For that reason, I flipped to the dishes dubbed &#8220;Exotishes&#8221; on a recent excursion to Ambiente Africa. There was plenty of strange stuff to choose from, but I was torn between crocodile and zebra. The antelope also looked good, but I figured it probably wasn&#8217;t so different from venison, but who really knows?

After careful deliberation, I decided to go with the crocodile. I must say the flavor was unique, but not out of left field either. I would describe it as chicken meets catfish. The croc nuggets were served with a mildly spicy tomato sauce, couscous and mixed salad. I washed it all down with a nice glass of South African red wine. Filling and scrumptious.

If you plan a visit with your significant other, and both of you are tempted by the crocodile (I concede, an unlikely scenario), then I would go with the croc-for-two special, which comes with appetizers, the main course of crocodile,wine and after-dinner drink. Cost: 48 euros. Not cheap, but you&#8217;re getting a one-of-a-kind dining experience.

Though the menus are in German, non-German speakers need not fear. The menu is easy to decipher. Crocodile is Krokodil. Zebra is Zebra. Antelope is Antilope. Not exactly rocket science. Things get a little more confusing the deeper you dig into the menu, but the English-speaking staff can help you out if you run into trouble.

The service is indeed friendly and the owner, Daniel Yaccob, usually drops by the table to see how the customers are doing. Yaccob runs the restaurant with his sister and mother, who are of Eritrean descent. The menu has specialties from their native country as well as other regions of Africa.

A few weeks after my crocodile experience, my thoughts turned once again to my little African restaurant on Wera Strasse. I was having a hard time getting that zebra out of my mind. Sure, I always felt bad watching those striped creatures on the Discovery Channel, where they were always getting torn to shreds by hungry lions.

Nonetheless, it didn&#8217;t seem so cruel if I was going to be the one doing the chewing.

Regarding the experience, all I can say is the sauce that covered the zebra was out of this world.

English menu: No. However, most of the staff speaks English.

Cost: Ranges from reasonable to pricey. For one of the exotic dishes, you will pay between 18 and 28 euros. Other dishes are in the 12-euro range.

Clientele: Mostly German, though there are usually a few English speakers in the mix.

Hours: 5 p.m. to 1 a.m. Monday through Sunday. Be sure to make a reservation because the tables are usually full.