After a hiatus, Michelle Pfeiffer returns in 'mother!' 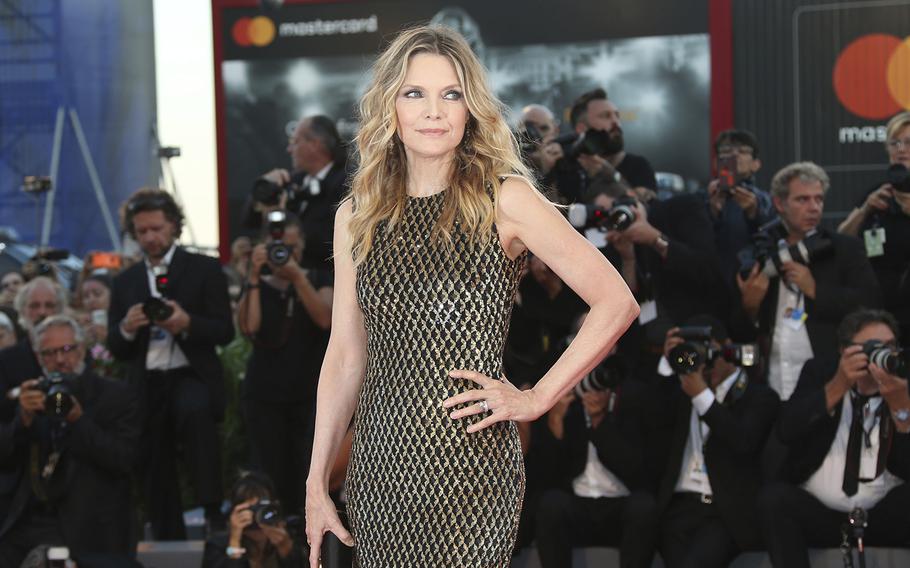 FILE - In this Sept. 5, 2017 file photo, actress Michelle Pfeiffer poses for photographers at the premiere of the film "mother!" at the 74th edition of the Venice Film Festival in Venice, Italy. Pfeiffer stars in Darren Aronofsky's allegorical thriller. (Photo by Joel Ryan/Invision/AP, File) (Joel Ryan/Invision/AP)

When Michelle Pfeiffer first read Darren Aronofsky’s script for “mother!” she had an understandable initial reaction.

“I thought: What the hell is this?” recalls Pfeiffer.

Aronofsky’s film is not in any way typical, nor is the kind of project you’d expect a long-absent actress like Pfeiffer to join as her first big-screen performance in five years. The film, intentionally shrouded in mystery, is a wild and weird odyssey by one of the movies’ expert conjurers of dark, surreal dream worlds that suspend its viewers - and often its performers, too - in a vividly atmospheric state of paranoia.

“You don’t even know, really, how to talk about it,” says Pfeiffer, as if throwing up her hands, in a recent interview.

But one of the many mysteries worth pondering in Darren Aronofsky’s allegorical thriller is a simple one: Why don’t we see Pfeiffer more often? The good news is that “mother!” represents the start of what may be a kind of renaissance for the 59-year-old actress, whose steely beauty and cool, piercing intelligence remains just as devastating.

“I’m really excited to be back,” says Pfeiffer. “Especially having worked with these exciting actors and these directors who I so admire. The most exciting for me is all of these really talented people that I’m able to do movies with.”

Along with “mother!” which Paramount Pictures will release Friday, Pfeiffer co-stars in Kenneth Branagh’s upcoming, more old-fashioned mystery “Murder on the Orient Express.” She has joined the cast of the “Ant-Man” sequel and earlier this year premiered the Sundance Film Festival entry “Where is Kyra?” in which she plays a woman struggling to survive in Brooklyn on her ailing mother’s income. She also received an Emmy nomination for her cocktail-drinking, chain-smoking Ruth Madoff in Barry Levinson’s HBO movie “The Wizard of Lies.”

It’s a flurry of activity for Pfeiffer, who says she pulled back partially to focus on family. She and her husband, the TV producer David E. Kelley, who live in northern California, have two children. Now an empty-nester, Pfeiffer has eagerly returned to regular work.

“She wasn’t on my mind because she hadn’t worked for a while,” says Aronofsky. “My casting director mentioned that she was interested in working again. I was immediately excited and interested by the idea of it. It’s been a while so I wasn’t so sure where she was at. But once we started to talk, it was amazing.”

Aronofsky (”Black Swan,” ‘’Requiem for a Dream”), long a fan of Pfeiffer, was impressed by her still sharp skills.

“I just wanted to applaud her at different times during the movie because she does things that are so hard to do,” he says. “Like those things where someone says something in the moment and you’re supposed to react in the moment with surprise or embarrassment and she was doing it take after take.”

Jennifer Lawrence stars in the film as the sweet and sensitive wife to Javier Bardem’s poet. They live in beautifully natural, labyrinthine house in the country, but they are soon beset by visitors, beginning with a man who shows up at the door (Ed Harris), who’s followed by his wife (Pfeiffer) and then others. The movie grows in intensity with the sensation of invasion; Aronofsky conceived it as a kind of allegory for an overrun Mother Earth.

“I have these dreams sometimes,” says Pfeiffer. “I’m in some house and I have to be somewhere or I have to do something and I can’t get out. I can’t find my way out. I know there’s some disaster looming ahead and I know it’s coming and no one will listen to me. This is like a really, really bad nightmare. It’s like your worst nightmare and you can’t wake up from it.”

After her Oscar-nominated breakthrough role in 1989’s “The Fabulous Baker Boys,” Pfeiffer became one of the top actresses in Hollywood, stringing together a varied filmography including “Dangerous Minds,” ‘’Batman Returns,” ‘’The Age of Innocence” and “What Lies Beneath.” That made her intimidating to her younger co-star.

“It took me two days to get over her beauty, and to go up to her and say hi,” Lawrence told reporters at the Toronto International Film Festival. “She’s very normal. She’s a mother. She’s a very smart woman.”

She is also a still-adventurous actress who was willing to go well out of her comfort zone for “mother!” Pfeiffer considers the film “a real leap of faith” since she went in with only a partial understanding of it, along with a director whom she says would sometimes leave the cast in the dark on the finer points of the drama.

“I went along with things I ordinarily would never have gone along with, like having the rehearsal process filmed,” says Pfeiffer. “And honestly, it was thrilling. It’s exciting to, after as many films as I’ve done over so many years, to have a really new and unique experience."