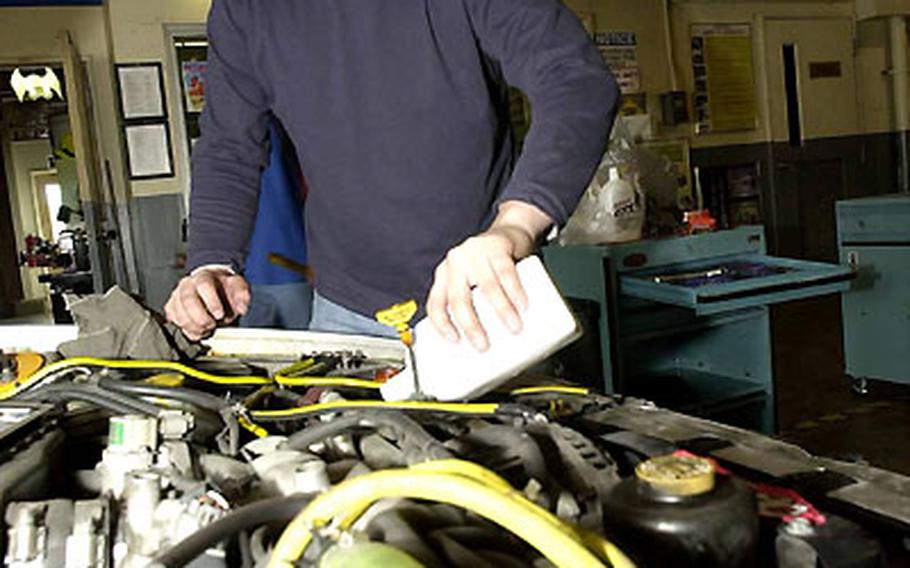 Senior Airman Richard Duwel of Misawa Air Base, Japan, says he has learned to save big bucks by doing his own repair work when it comes time to renew Japanese Compulsory Insurance on his two vehicles. He takes advantage of the base’s auto skills center, where he can perform necessary adjustments in heated work bays. (Wayne Specht / S&S)

Senior Airman Richard Duwel of Misawa Air Base, Japan, says he has learned to save big bucks by doing his own repair work when it comes time to renew Japanese Compulsory Insurance on his two vehicles. He takes advantage of the base’s auto skills center, where he can perform necessary adjustments in heated work bays. (Wayne Specht / S&S) 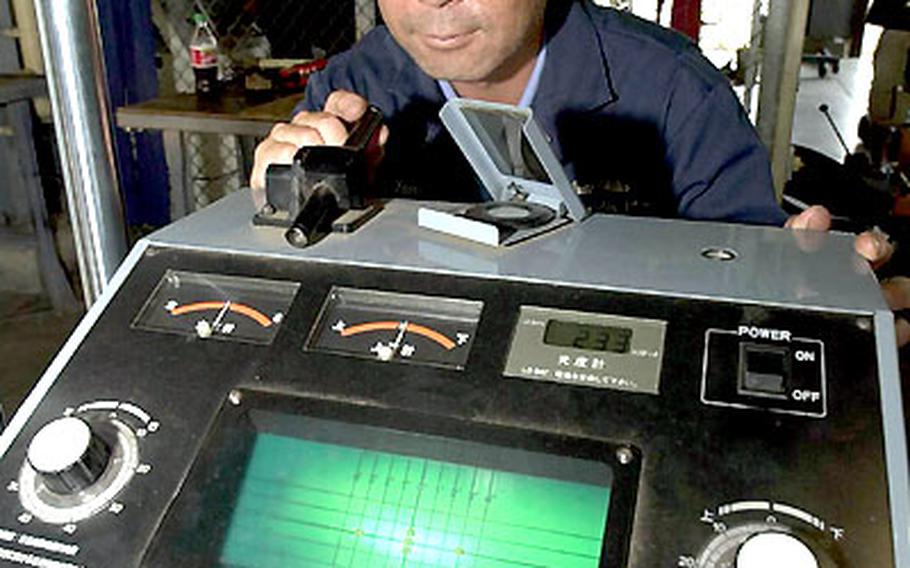 Yoshikatsu Yamamoto uses an alignment machine to check the aim of a van’s headlight as he performs a pre-JCI inspection at the auto skills center at Misawa. Yamamoto has been doing JCI pre-inspections for seven of his 20 years as a base employee. (Wayne Specht / S&S) 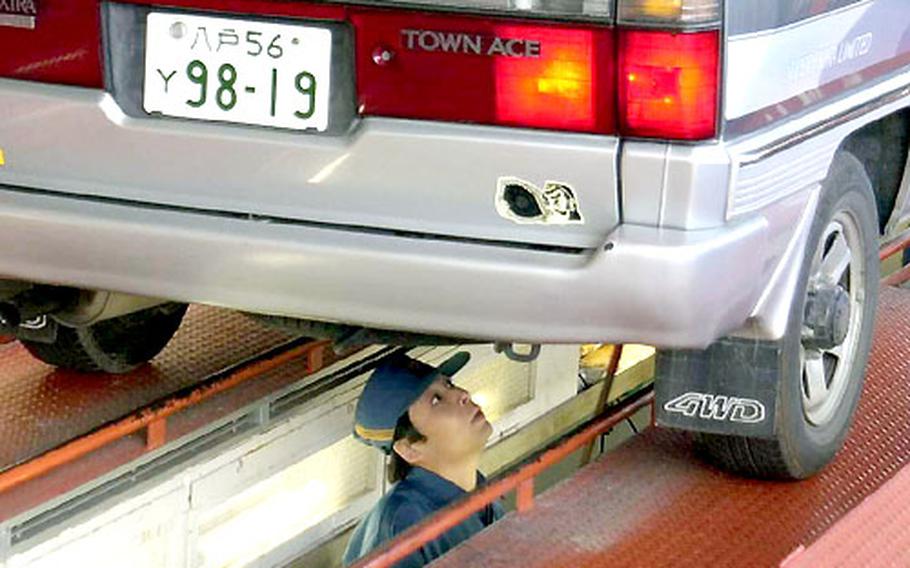 A Japanese inspector examines the underside of a van during the safety inspection at the Hachinohe Land Transportation vehicle inspection station near Misawa Air Base. (Wayne Specht / S&S) 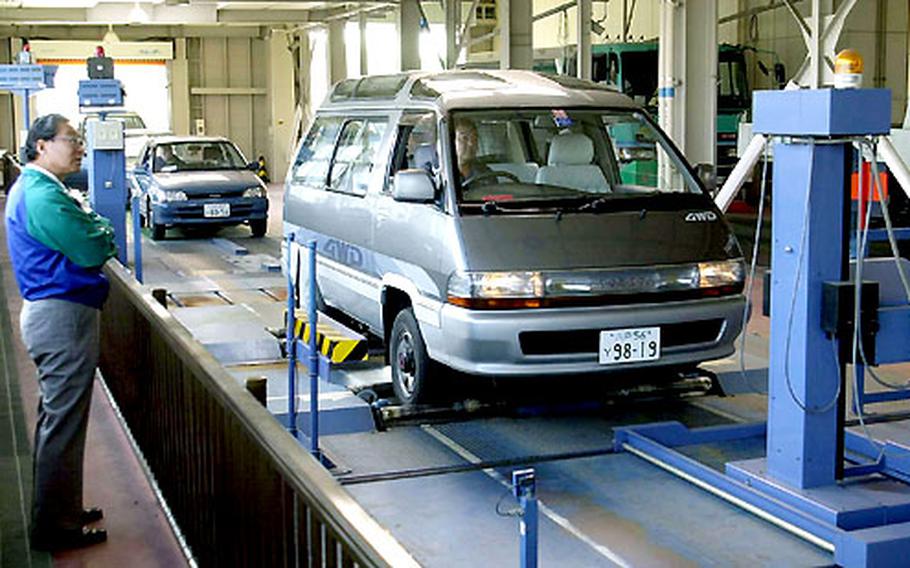 A motorist observes a van moving through the inspection line at the Hachinohe Land Transportation vehicle inspection station near Misawa Air Base, Japan. Vehicles are checked for headlight and wheel alignment, hydrocarbon emissions, integrity of brakes and many other safety requirements. (Wayne Specht / S&S)

After all, the Air Force senior airman has a knack for things mechanical &#8212; he just happens to be an F-16 engine technician.

Duwel, like all motorists in Japan, can count on one fact of life during a tour of duty in the Land of the Rising Sun: If they own and operate a car or van, Japanese Compulsory Insurance coverage, in addition to liability insurance, is mandatory.

The policy, usually purchased from an insurance company and costing 27,600 yen, or about $240, is good for two years.

However, policies usually expire when semiannual safety inspections required by the Japanese government come due. Vehicle owners have several options to get the JCI renewed in conjunction with the required vehicle inspection.

&#8220;They can have a garage on- or off-base do the preparation, or come to the auto skills center and do it themselves,&#8221; said Josh Pritchard, manager of the 35th Services Squadron auto complex.

About 50 percent of drivers here, Pritchard said, opt to do the work themselves in the warmth of the skills centers where maintenance as simple as an oil change, or as difficult as a transmission replacement, can be undertaken.

It&#8217;s a snap getting a vehicle ready for the two-year inspection, too.

For a $20 fee, skills center employee Yoshikatsu Yamamoto will place a vehicle on a hydraulic lift and give the underside a safety pre-inspection to determine if it would pass an inspector&#8217;s eagle eye.

Included in the fee is headlight alignment, a check of the front wheel toe-in and toe out, integrity of the brakes, an emission check and other safety checks.

Yamamoto has been a base employee for 20 years, and has been doing pre-inspections at the garage for the past seven.

He knows what to look for.

&#8220;Leaks from rubber boots in the steering mechanism or ball joints, holes in mufflers and bad brakes are the common problems I see,&#8221; he said.

If nothing needs repair, consider yourself lucky.

Major discrepancies must be repaired to pass inspection and get the windshield stickers that tell the world the vehicle is good to go for two years.

For an additional $20, Yamamoto will escort a small convoy of GI-owned vehicles to the Land Transportation Office in Hachinohe, about a 30-minute drive from the base.

Owners must, however, make the inspection appointment themselves during weekdays, although most insurance agencies will do that as a courtesy when the JCI policy is purchased.

At the inspection station, drivers surrender their vehicles to Japanese inspectors, who run them through the stringent inspection process during a 15-minute computerized routine.

Also completed at the same time is payment of weight taxes, the inspection fee and administrative fees totaling about 14,000 yen &#8212; about $122 &#8212; but that varies depending on weight of the vehicle and size of engine.

For those who can&#8217;t kill half a day going to the inspection site, Pritchard said the 35th Services Squadron garage will handle all the hassles for a $90 fee.

At Yokota Air Base near Tokyo, the Army and Air Force Exchange Service charges 5,500 yen, $47.82, for the pre-inspection, and provides estimates for items needing repairs. That fee also includes re-inspections following any repairs.

Things get really expensive when something major has to be repaired.

Not unheard of is owners here being presented with bills ranging from $200 to as much as $800 by off-base garages in return for the JCI preparation.

Duwel said he prefers to rummage around local junkyards near the base to scrounge for needed parts. That, he said, saves him big bucks.

Many military bases in mainland Japan and Okinawa have auto skills, or hobby shops, where those so inclined can take advantage of big savings.

When Duwel arrived at Misawa in 1999, he said he knew more about jet engines than he did about cars.

But the staff at the skills center changed that.