A different view of Jeju Island 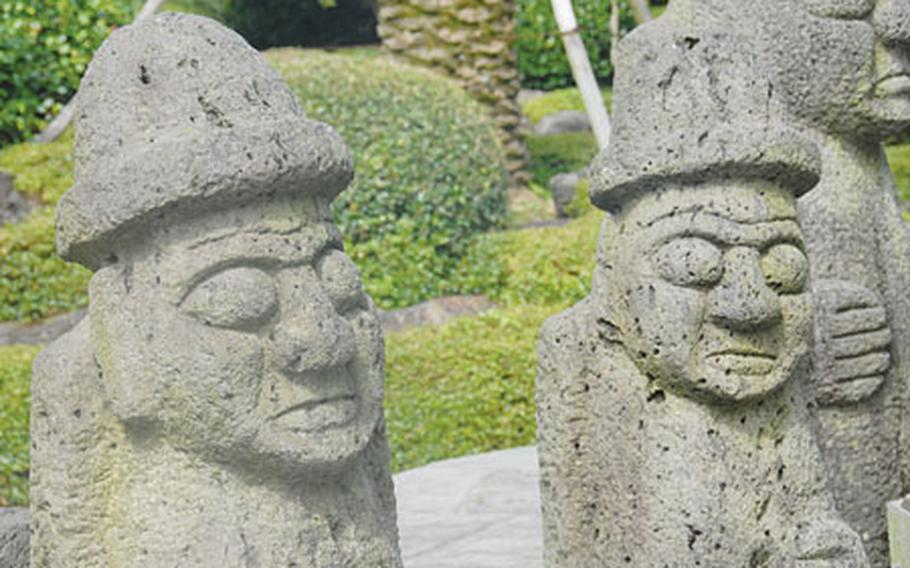 Jeju Island is famous for its harubang, or grandfather statues. (Ashley Rowland / S&S)

The honeymooners are outnumbered on Honeymoon Island.

For decades, newlyweds flocked to palm-tree-dotted Jeju Island, the southernmost point in South Korea and just an hour&#8217;s flight from Seoul. But on a recent trip here, we spotted more families, college students, and couples without wedding rings than honeymooners.

Jeju also didn&#8217;t quite live up to its billing as the South Korean version of Hawaii. But this volcanic island, famous for its women divers, seafood and harubang, or grandfather statues, has plenty to offer for a weekend trip, whether or not you&#8217;re coming straight from the altar.

This tea museum is small, but it may be the island&#8217;s best place to relax when you get tired of the beaches. Stroll through the grounds of this working tea plantation, or through the museum&#8217;s two display rooms of teapots and cups, which, unfortunately, have descriptions only in Korean. And if looking at dishes isn&#8217;t your cup of tea, there&#8217;s a cafe that serves &#8212; you guessed it &#8212; tea, as well as green tea ice cream, green tea tiramisu, green tea sweet potato cake and green tea chiffon cake. There&#8217;s also a gift shop that sells tea leaves, tea scoopers and tea sets. Entrance to the museum is free. Prices vary for food and souvenirs.

Best way to get a workout and some culture: Hiking to Sanbanggulsa Temple

This Buddhist temple isn&#8217;t fancy, just a small shrine in a cave on the side of a mountain. But the steep climb to the temple is worth it for the stunning views of the island&#8217;s coastline.

Worst way for an English speaker to see the island: On a Korean-speaking tour

We booked a day tour through our hotel for 17,500 won ($19.57), thinking it would be an inexpensive way to see several sites on the eastern half of the island. Sure, it was cheap, and we saw things we might not have found on our own &#8212; a picturesque stretch of volcanic rocks jutting out of the ocean, a &#8220;ghost road&#8221; where busloads of tourists unload to watch water bottles seemingly roll uphill, and a circus-like acrobatics and horseriding show. But we didn&#8217;t know what we were visiting most of the time.

This park itself is worth skipping, unless you want to stroll around for an hour or so looking at funny-shaped rocks and bonsai trees, lava tunnels, a small folk village, a man-made waterfall and a few ostriches in a pen. But Hallim is the place to go for cheap and tacky souvenirs. The park has several gift shops that sell Jeju&#8217;s harubang statues, in every form imaginable, including keychains, hand towels, soap, salt and pepper shakers, picture frames and magnets. You can also buy teas and chocolates made from fruit and cacti grown on the island.