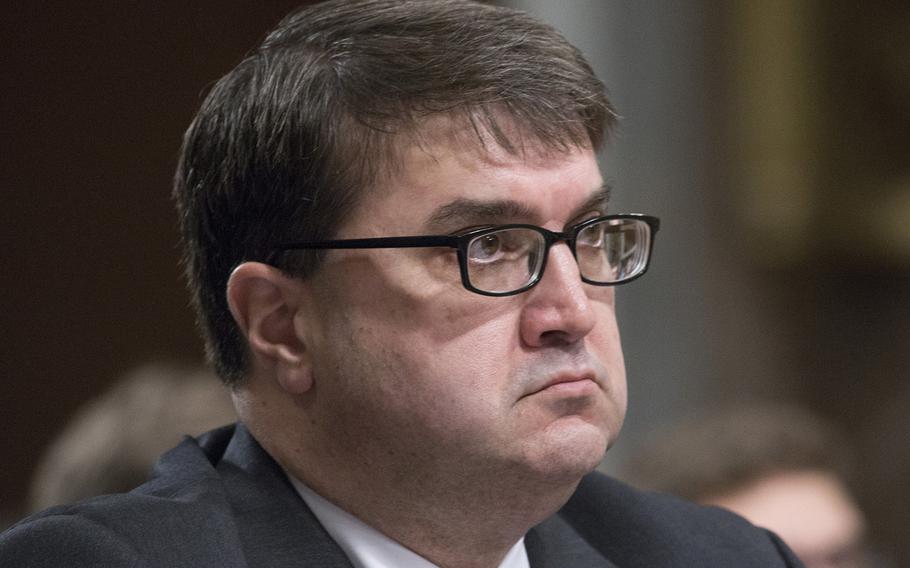 A lawsuit claims that the appointment of acting VA Secretary Robert Wilkie, shown here at a Senate hearing in 2017, bypassed the order of succession at the Department of Veterans Affairs. (Stars and Stripes)

WASHINGTON – A new lawsuit argues President Donald Trump illegally bypassed the order of succession at the Department of Veterans Affairs when he tapped Robert Wilkie to lead the agency after the March dismissal of VA Secretary David Shulkin.

The suit was filed Monday in U.S. District Court by VoteVets, a liberal-leaning advocacy group, and the Democracy Forward Foundation, a nonprofit legal organization. They accuse Trump of circumventing federal statues, specifically the Federal Vacancies Reform Act of 1998 and the Appointments Clause of the Constitution.

“This case is about … who possesses the authority to make the many day-to-day decisions regarding veterans’ benefits and care that the Secretary of Veterans Affairs has to make,” the suit states.

Wilkie came to the VA from the Defense Department, where he worked as undersecretary of personnel and readiness.

The groups argue that VA Deputy Secretary Tom Bowman is the appropriate person to fill in as acting secretary until the Senate confirms a permanent leader. The Senate confirmed Bowman in August to take the No. 2 position.

“Robert Wilkie never had hearings to examine his views of veterans’ care, or how he envisions the VA working. This flies in the face of the entire system of checks and balances that federal statutes and our Constitution call for,” said Will Fischer, director of government relations for VoteVets.

The lawsuit was filed just as the duration of Wilkie’s stint as acting secretary grew more indefinite.

Rear Adm. Ronny Jackson, the top White House physician and Trump’s pick to lead the VA, withdrew from consideration Thursday after he faced accusations of drinking on the job and freely handing out prescription medications. He denied the allegations, which have yet to be substantiated.

Trump had not announced a new nominee as of Monday afternoon.

The lawsuit states Wilkie’s appointment is illegal under the Federal Vacancies Reform Act, which gives a president broad authority to temporarily fill an agency job if the officeholder “dies, resigns, or is otherwise unable to perform the functions and duties of office.” The law doesn’t explicitly state whether it applies when someone is fired.

Trump announced his decision over Twitter on March 28 to nominate Jackson as the new VA secretary. In subsequent days, Shulkin told multiple news outlets that he was effectively fired by the Tweet. Shulkin pushed back against assertions from the White House that he had resigned.

“I came to the VA to fight for our veterans, and I had no intention of giving up,” Shulkin told NBC’s “Meet the Press” on April 1. “I had no reason to resign. I made a commitment.”

At the same time Trump announced Jackson’s nomination, the president tweeted that Wilkie would lead the VA in the interim. The decision immediately drew scrutiny.

The veterans organization AMVETS wrote a letter to Trump, calling for Wilkie to be sent back to the Pentagon and Bowman named as the VA’s interim leader. Disabled American Veterans also questioned Wilkie’s experience, stating he “has no background in health care and no apparent experience working in or with the department.”

Monday’s lawsuit was filed against Wilkie and the VA. Army veteran Samir Hamel and VoteVets leader Will Fischer, a Marine Corps veteran, are named as the plaintiffs. Both are enrolled in VA health care and receive other VA benefits.

VoteVets and the Democracy Forward Foundation argue Wilkie’s appointment is subjecting Hamel, Fischer and other veterans to “continued, profound uncertainty about how and under what conditions they will receive their benefits.”

“Plaintiffs need to know how and whether they can access VA health care services,” the lawsuit states. “Plaintiffs are also deprived of the right to a lawful acting secretary who will vigorously represent their interests before Congress and the rest of the executive branch – and one whose authority is undisputed.”

The lawsuit brings up the issue of “privatization,” referring to the debate about the VA’s use of private-sector medical providers to supplement veterans’ care. Shulkin said he was fired because White House insiders saw him as an “obstacle to privatization.” Fischer argued that by tapping Wilkie to the position, rather than allowing Bowman to lead, it was Trump’s intent to “get a head start” on privatization.

“President Trump can’t ignore federal law just because he wants to privatize VA health care to appease his wealthy donors,” said Anne Harkavy, director of the Democracy Forward Foundation. “The laws governing how political vacancies are filled and the limits on when a president can bypass Congress to unilaterally handpick an appointee are fundamental to how our government works. In this case, the laws ensure the interests of America’s veterans are represented.”

Shortly after Wilkie took over as VA chief, the agency released a statement saying, “There is no effort underway to privatize VA, and to suggest otherwise is completely false.”

The lawsuit asks that the court declare Bowman as the appropriate acting secretary.