Lawmakers ramp up hearings in face of military housing crisis 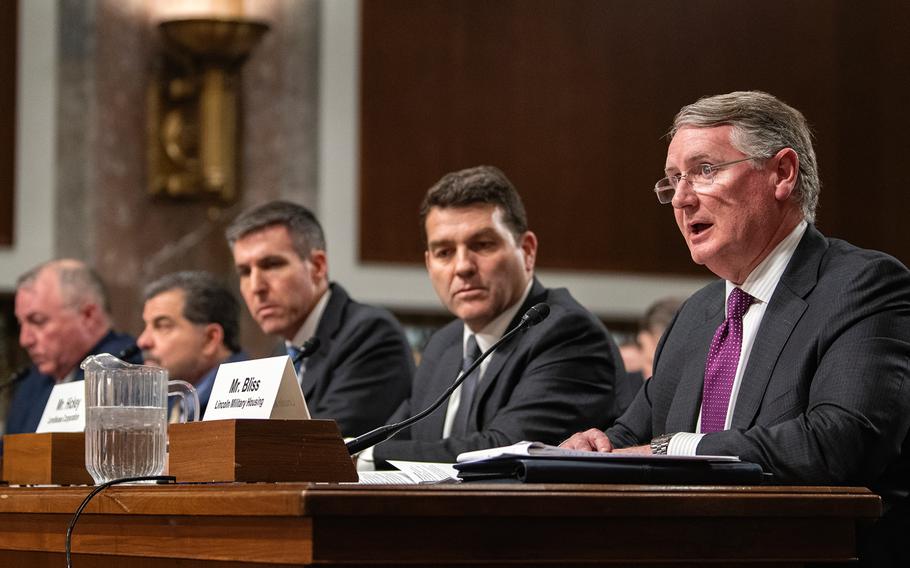 Jarl Bliss, president of Lincoln Military Housing, testifies at a Senate hearing on Capitol Hill in Washington on Feb. 13, 2019. Bliss said his organization regrets "when even one servicemember family feels we have come up short," in providing quality housing. Joning Bliss were other housing executives who expressed similar sentiments. They were next to Bliss from right to left: Denis Hickey with Americas Lendlease Corporation; John Ehle with Hunt Military Communities; John Picerne with Corvias Group; and Christopher Williams with Balfour Beatty Communities. (Carlos Bongioanni/Stars and Stripes)

WASHINGTON — In December 2017, a group of distressed military spouses submitted a 53-page presentation to the Military Family Readiness Council that painted a disturbing portrait of housing troubles for servicemembers across the country.

They were told the council didn’t handle such worries, Crystal Cornwall and Jean Coffman remembered.

Now that damning media coverage has sparked a rash of congressional hearings and dozens of military town hall meetings, the women said there’s a long road ahead to addressing their original 2017 report.

“I hope they are going to recognize there is a big problem,” Cornwall, 35, who is now based out of Marine Corps Base Quantico in northern Virginia, said of lawmakers and military leaders. “The military has to start believing their own people.”

The concerns have coalesced into what appears to be the largest crisis to hit military housing since a 1996 privatization initiative let outside contractors take over the residences. Previously, the military managed these properties.

In recent months, the military’s services have hosted dozens of town halls on bases. Some families, previously afraid to speak for fear of retaliation, are increasingly coming forward.

On Friday, Air Force Secretary Heather Wilson met privately with families at MacDill Air Force Base, where she asked command staff to leave so they could speak freely. On Thursday, the Senate Armed Services Committee is slated to hold its second hearing on military housing problems to examine the chain of command’s role in the crisis with service secretaries and chiefs slated to testify.

“I heard compelling testimony from military families and read statements from dozens more who have endured horrific living conditions,” Sen. Jim Inhofe, R-Okla., chairman of the Senate Armed Services Committee, said in a recent statement. “Families felt they had no advocate within the military to ensure they had high-quality, affordable housing. That is unacceptable and we need to ensure that the chain of command appropriately supports these families entrusted to their care.”

Dallas-based Lincoln Military Housing, which manages 37,000 residences, will also listen to family concerns when they host a private town hall at Quantico on Thursday evening, said Trent Duffy, a spokesman for Lincoln.

“I regret when even one servicemember family feels we have come up short,” Jarl Bliss, president of Lincoln Military Housing, said at a recent Senate hearing. “I deeply regret any of our families feel this way.”

Leadership responds During a Feb. 27 subpanel meeting of the Senate Armed Services Committee, personnel leadership of each military branch said the housing issue is a priority and commanders were visiting housing areas to see for themselves what the living conditions are for servicemembers and their families.

“Our commanders have a responsibility for making sure our airmen and their families are taken care of,” said Air Force Lt. Gen. Brian Kelly, deputy chief of staff for manpower, personnel and services.

Top officials from the Pentagon’s four military services have vowed to make the issue of unfit privatized housing a top priority. Across the United States, and at posts overseas, top installation officials have held town hall meetings to hear directly from the families of servicemembers impacted by housing problems.

“We owe our soldiers and their families safe, high-quality housing,” Milley said after that visit. “That did not happen in a troubling number of cases and that is unacceptable. We have to do better and we will.”

Those senior leaders later met with the leaders of companies running privatized, on-base housing and discussed housing conditions raised by Army families. They agreed to establish a “Tenant Bill of Rights” that would create standardized procedures for families to raise issues and companies to address them. The terms are expected to be revealed in the coming days, two defense officials at the Pentagon said. The other services are expected to establish similar polices.

The new legislative and Defense Department efforts were launched after a 2018 series by Reuters exposed extensive disrepair and dilapidated conditions found at military housing properties. People included in the series, such as Cornwall, recounted battles with the private companies that manage the homes at a congressional hearing earlier this month.

Families take action Now, Cornwall is in the midst of launching a new nonprofit called Safe Military Housing Initiative after running into her own residential nightmares and hearing hundreds more cases from other families. Coffman, the wife of an retiring Marine major general once based at Camp Pendleton in Southern California, is planning to serve on the nonprofit’s board.

“We found out there’s a whole community out there,” Coffman, 65, said of her work on this issue, which began in 2016.

Nearly a decade ago, Cornwall’s family was based at Keesler Air Force Base in Biloxi, Miss., where termites fell out of their light fixtures onto their beds. Starting in 2014, they were based at Camp Pendleton, where the family battled mold issues and costly move-out charges.

Coffman, who lived in general’s housing at Camp Pendleton about the same time, was horrified to discover while visiting a friend’s house that she had no air conditioning because it was not allowed. The upstairs temperature was 84 degrees, nearly 20 degrees hotter than the outside temperature at the time, Coffman remembered.

“It was a beautiful May day, 68 degrees outside,” she said. But “I got to the top of the steps and it was blazing hot. None of the windows were open. I had no idea. I was out of the loop.”

Coffman, who worked in real estate, reported the concerns to Lincoln, which manages the Camp Pendleton homes. She didn’t hear much about fixes after that.

“I kind of let the subject go, but started collecting stories from neighbors,” she said.

At Camp Pendleton, Coffman found many of homes had windows that were low to the floor and were blocked by furniture downstairs or remained closed upstairs for fear of children or pets falling out.

Coffman started to help measure temperatures in the homes, and some of them went as high as 104 degrees.

Then she heard of mold growing on walls, family furniture and even military uniforms. That year, Coffman started to see water intrusion through her own windows and began to see signs of mold. She later developed her own health issues.

Through her work, Coffman heard Cornwall was battling costly fees for moving out of her Camp Pendleton home in 2017. That’s when Coffman and Cornwall joined forces.

By December, they had collected hundreds of accounts of mold contamination, dangerous temperatures, pest infestations, contamination and other concerns plaguing military houses across the country.

Cornwall and Coffman collaborated on a report with photos and accounts of housing problems from impacted servicemembers. They submitted the packet to the Pentagon’s family readiness council along with a dozen letters from residents detailing specific cases.

Looking for solutions Coffman said she’s glad the media, lawmakers and military leaders are now paying attention, though this wasn’t the path they envisioned for rectifying the concerns. They hoped it could be addressed along the chain of command.

“We have been working this a very, very long time,” Cornwall said. “Nobody was listening.”

Now Cornwall and Coffman are worried whether the crisis can be stopped. For example, there’s an overarching concern that building structures and materials used in the newer military homes could be contributing to mold and other troubles, Coffman said.

“If all they do is just try to slap on some Band-Aid solutions and not take a comprehensive look,” then this problem won’t be solved, Coffman said.

Cornwall testified that during two years of researching military housing, she saw peeling lead paint at a residence at Fort Belvoir in Fairfax County, Va., a collapsing, moldy ceiling at a Camp Lejeune home in Jacksonville, N.C., residential mice infestation at Camp Pendleton and water leaks at private homes at Keesler Air Force Base.

In addition, Cornwall said military families fighting for safe housing, in some cases, have met with retaliation in the form of intimidation, personal attacks and attempts to discredit and silence them.

She has implored lawmakers to consider amending or cancelling their 50-year contracts with privatized housing providers, let families have new legal options to fight back and allow them the ability to withhold housing allowances until residences are safe and habitable.

Cornwall is also concerned who is going to handle the long-term illnesses and other health impacts that have plagued impacted military families in the wake of their housing problems.

“What about the health impact? Some of these families, their children, will never get better,” Cornwall said. “Who is going to pay for that?”